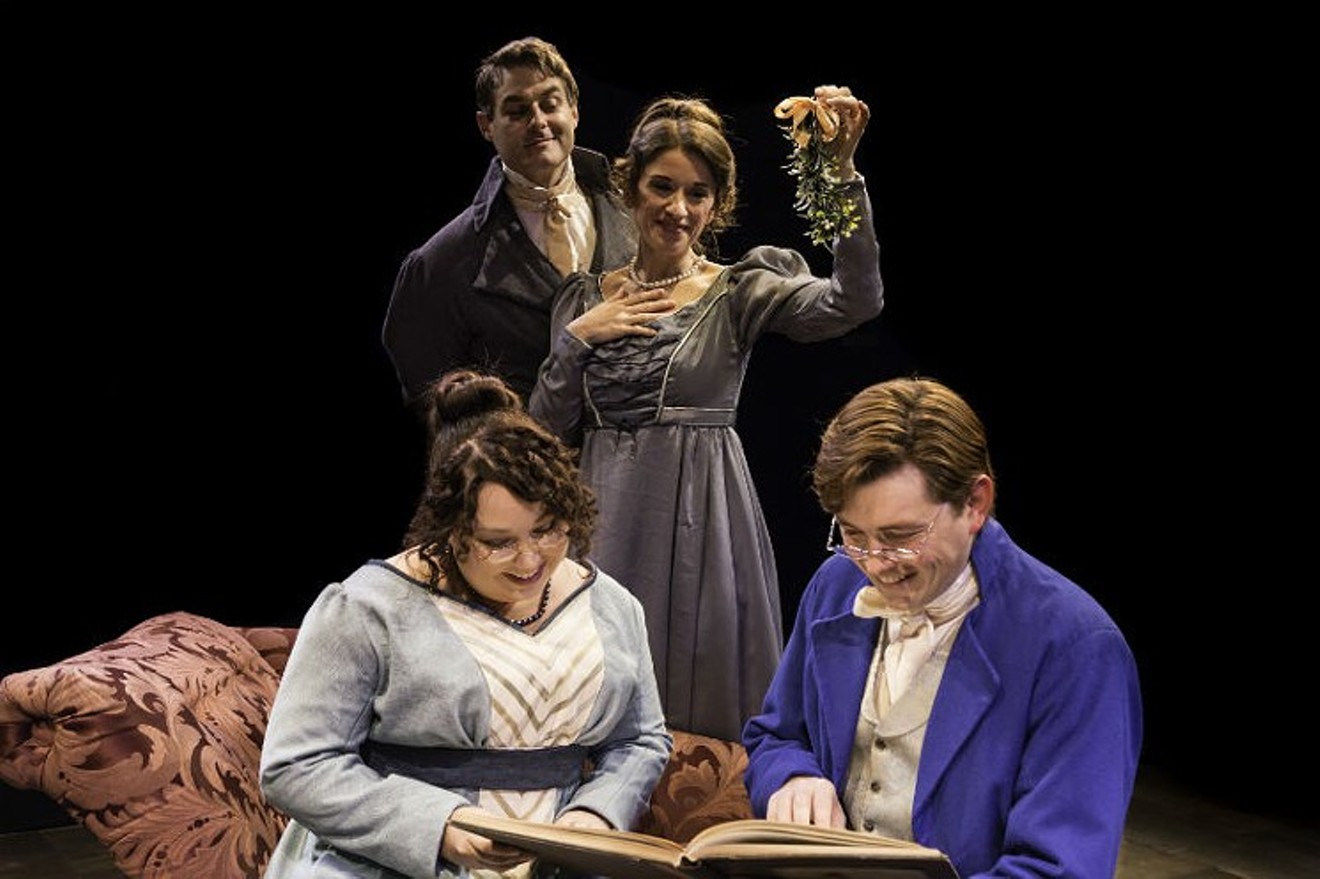 The 2017 Main Street Theater production of Miss Bennet: Christmas at Pemberley, is returning, probably with at least a few new faces on stage. . Photo by Blueprint Film Co. 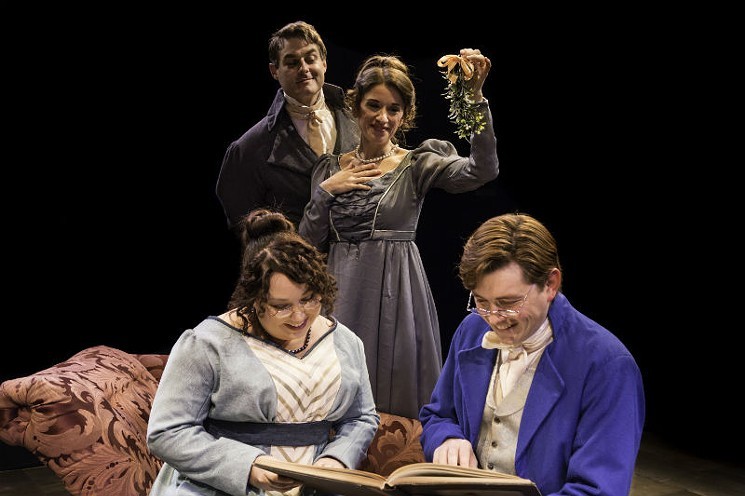 The 2017 Main Street Theater production of Miss Bennet: Christmas at Pemberley, is returning, probably with at least a few new faces on stage. .
Photo by Blueprint Film Co.
In announcing a season with two regional premieres, the theatrical equivalent of comfort food and some biting comedy, Main Street Theater's Artistic Director Rebecca Greene Udden says the common theme is that "all of these plays raise questions that I hope the audience will continue to think about when they leave the theater."

Or as she also puts it: "Go to the theater; these are great plays!"

Like other Houston area theaters, Main Street is being somewhat cautious about its line, in-person reopening to audiences, given that COVID-19 is far from a thing from the past.

"We are prepared, depending on what the numbers are in Houston, we are prepared to have to limit the capacity if we need to but we're hoping we can open at full capacity. We will issue guidelines when we get closer. People who are uncomfortable can wear masks. Obviously all the actors and everybody working on the show on our part will have to be vaccinated before we start even rehearsals.," she says.

"If we have too many audience members who say 'I just don't feel comfortable coming to the theater,' then maybe we'll live stream a few performances [if the licensing companies involved allow them to do so] so people can watch at home. We're not going to record anything. But they can watch a live performance along with the audience. So that would be a compromise if we don’t feel like we can operate at full capacity. I know it's a complete tossup right now but I'm optimistic that as we get to the end of September we're going to be very close to the Before Times."

A change that they're making is to upgrade their ventilation system with UV purification to cleanse the air. They also recognize their front lobby area is their biggest choke point and are exploring options for outdoor seating during intermission and while audience members wait for the show to start.

Other changes in store involve a move to more color-blind casting. Udden says Main Street (with a nod to Bridgerton) plans to hire actors with an eye to more diversity. "We're going to throw it open. There's no reason to stick with just the same people over and over. So we're trying to expand the artists we're using," she says. In the case of Miss Bennet: Christmas at Pemberley the chance to diversify parts as well as some actors moving away, means audiences will be looking at a somewhat different group on stage than they saw in 2017.

Asked why Main Street decided to go with the Miss Bennet play as opposed to its sequel The Wickhams, Udden says there's a third play in the works now so they thought to start the series over and hope to run them in order over the next three years. (The third one will probably be about Kitty).

Another play coming back for a return engagement is Tom Stoppard's The Real Inspector Hound which is both a send up of Agatha Christie mysteries and a send-up of theater itself, Udden says. This will be  the fifth time Main Street has done it. Udden calls it a good show for summer audiences.

Recently to much acclaim, Main Street presented a virtual production of playwight Caridad Svich's The Book of Magdalene. They plan to follow that up with Aunt Julia and the Scriptwriter which is based on Mario Vargas-Llosa's autobiographic novel and Udden says, is a much more traditional play than the bulk of her work.

"The Book of Magdalene, as I was reading it, I thought this would really work in the pandemic. I'm not sure how it would have worked if we'd done it as a continuous play on our stage. There's a certain cinematic quality to some of her more expressionist plays."

Dog Act set in the post apocalyptic wilderness is a comedy. Really, says Udden. "It's hysterical and it’s also very poignant. It has a real punch at the end. What makes it so funny is the way she has taken language and transmuted the English language into this post apocalyptic vernacular which is half Shakespeare and half street language. It's so wonderful to listen to."

They had produced it before it was and did it in the summer and Udden says it did not get the audience it needed. The Alley Theatre is doing one of her plays right after Main Street does Dog Act.

Darwin in Malibu opens the season and  "is for the thinkers in our audience," Udden says. "It's a good conversation by three dead, white men about God and science and the place of each in the world. " Udden says it's witty and fun and she's counting on her audience to be curious about a conversation among Charles Darwin Bishop Wilberforce and Thomas Huxley at a beach house.

Malibu, California. The present. One hundred and twenty years after his death, Charles Darwin (‘the Devil’s Chaplain’) is hanging out at a beach house overlooking the Pacific with a girl young enough to be his daughter. His peace is rudely disrupted when his old friend Thomas Huxley (‘the Devil’s Disciple’) washes up on the beach, closely followed by the Bishop of Oxford, Samuel Wilberforce. These three find themselves entangled in an enthralling and thought-provoking comedy about God and science.

A sequel to Jane Austen’s Pride and Prejudice, Miss Bennet is set two years after the novel ends and continues the story, this time with nerdy middle-sister Mary as the unlikely heroine. Mary is growing tired of her role as the dutiful middle sister in the midst of everyone else’s romantic escapades. When the family gathers for Christmas at Pemberley, an unexpected guest sparks Mary’s hopes for independence, an intellectual match, and possibly even love!

Mother of the Maid
Regional Premiere
By Jane Anderson
February 5 – 27, 2022
Previews: January 30 and February 3 and 4

In this riveting new play, Jane Anderson reimagines Joan of Arc’s epic tale through the eyes of her mother. Isabelle Arc is a sensible, hard-working, God-fearing woman. Her headstrong daughter, on the other hand, communes with Saint Catherine, wears men’s clothing, and prepares to lead the French army into battle. Motherhood in the Fifteenth Century isn’t easy! Isabelle closely follows the baffling yet awe-inspiring journey of her curious, extraordinary daughter. Isabelle remains steadfast in her love and presence for daughter to the end, facing her own fears and doubts about her own faith along the way.

The post-apocalyptic wilderness was never funnier! Follow the adventures of Zetta Stone, a traveling performer, and her companion Dog (a young man undergoing a voluntary species demotion) as they wander through the former northeastern United States. Zetta, Dog and their little vaudeville-esque troupe are on their way to a gig in China, assuming they can find it. A theatrical, darkly comic variation on the classic doomsday genre that hysterically and poignantly celebrates the need for language and stories when civilization has fallen into chaos. Recommended for mature audiences due to profanity, violence, and adult situations.

Houston audiences will have a wonderful opportunity to sample Liz Duffy Adams’ work when the Alley Theatre offers the world premiere of her newest play, Born with Teeth, around the same time as Main Street’s production of Dog Act.


Aunt Julia and the Scriptwriter
English Language World Premiere
A play by Caridad Svich
Based on the novel by Mario Vargas-Llosa
Directed by Amelia Rico
May 14 – June 5, 2022
Previews: May 8, 12 and 13

Based on the autobiographical novel by Nobel Prize-winning Latin-American writer Mario Vargas-Llosa, Aunt Julia and the Scriptwriter follows the passionate love story between a young Vargas-Llosa and an older divorcee in 1950s Lima, Peru. A boisterous, high-spirited comedy with a big-hearted romantic story at its center, Aunt Julia and the Scriptwriter is what playwright Svich calls “a coming-of-age story about the performance of everyday life, the wonderfully disordered nature of love, and an homage to the golden age of radio and the spirit of classic screwball comedies.”

Attending the premiere of a new murder mystery, two feuding theater critics soon find themselves drawn into the play-within-a-play! In the hilarious spoof of Agatha Christie-style mysteries that follows, the mists roll in around isolated Muldoon Manor, and the critics become implicated in the lethal activities of an escaped madman. It’s brilliant comedy as only Tom Stoppard can do!


For more information, as well as the schedule for their youth theater season, visit the Main Street Theater website.
KEEP THE HOUSTON PRESS FREE... Since we started the Houston Press, it has been defined as the free, independent voice of Houston, and we'd like to keep it that way. With local media under siege, it's more important than ever for us to rally support behind funding our local journalism. You can help by participating in our "I Support" program, allowing us to keep offering readers access to our incisive coverage of local news, food and culture with no paywalls.
Make a one-time donation today for as little as $1.