Looking for More Than Boobs and Beads at Mardi Gras! Galveston 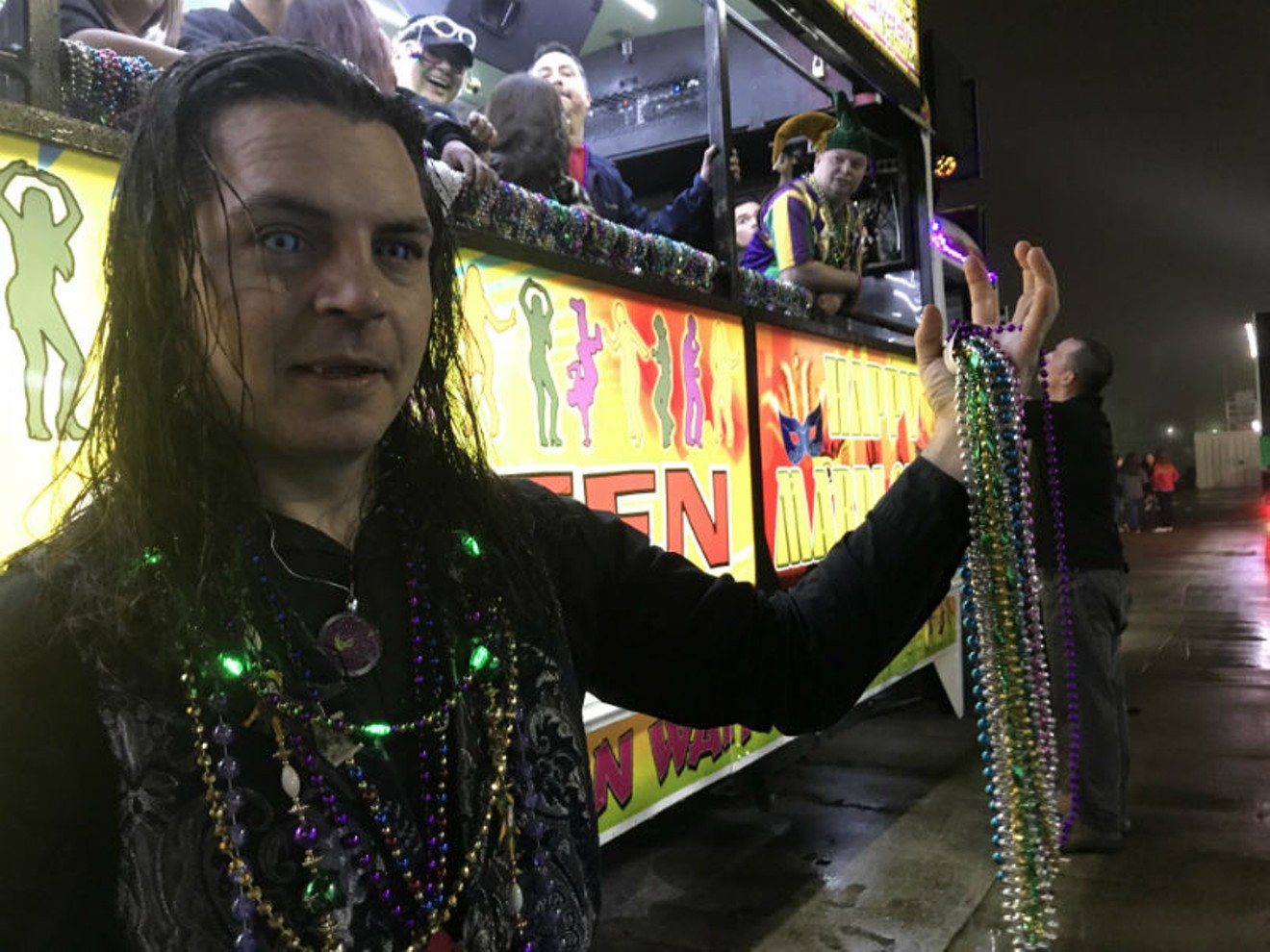 Things get weird, in the best of ways, at Mardi Gras! Galveston Photo by Jesse Sendejas Jr.

The kid from Oklahoma provided a succinct and stark reminder why some people don’t like Mardi Gras. He stood next to me on the balcony of a building at 23rd and Strand overlooking a handful of Mardi Gras! Galveston revelers. Oklahoma Kid said this was his first-ever excursion to the island for its annual parties and parades ahead of the Lenten season. He was young, but old enough to drink and it seemed he’d done plenty of it that night. He wore a ball cap and attire that suggested he’d driven his John Deere 500 miles down I-45 for the festivities. Then, he blurted out what he apparently really wanted to tell me or anyone else who’d give him a listen.

“I saw a lot of titties!” he squealed.

Sadly, the kid had limited his Mardi Gras! Galveston expectations to drunken depravity, a rookie mistake. It had been some time since I’d attended the festivities myself, but as fate would have it, I was able to participate both weekends this year, as a spectator and as a parade participant. Being involved on both ends of the spectrum for the first time ever reminded me what’s great about it and, more so, what’s awesome about its host city. 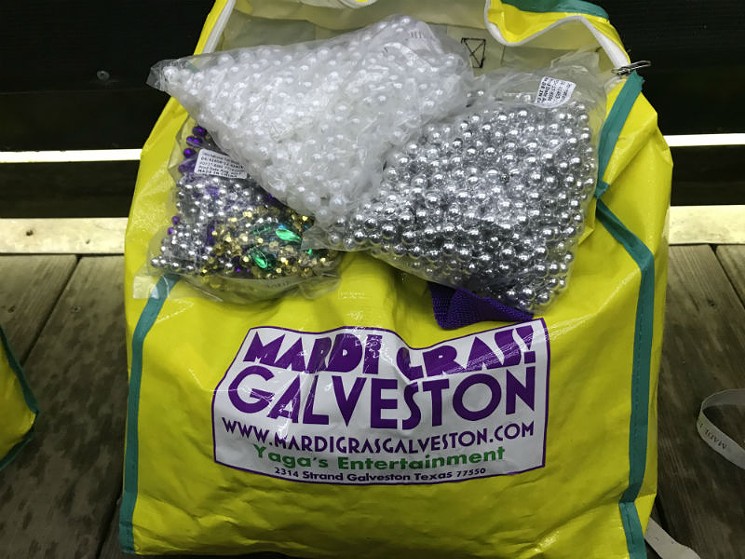 I’ve experienced many firsts on Galveston Island, starting with my first breath. I was born there, lots of years ago, in John Sealy Hospital. Later, I had my first job there, buffing floors for my grandfather’s janitorial business. I learned to drive on Galveston’s wide avenues and numbered streets. I had my first adult beverage there, a piña colada an uncle bought for me at least three years before I was legally allowed to drink. My first unfinished novel (there are four, sad-face emoji) is set there. My parents, who’ve long gone to the big Balinese Room in the sky, grew up there and many of my kinfolk still live there.

Admittedly, familiarity bred contempt in me over the years. Being back for Mardi Gras over the course of two weekends — and riding in the parade, another Galveston first — reminded me what I’ve been missing about Galveston and why first-time visitors like that Okie I met should stick around to see more than what they came for. 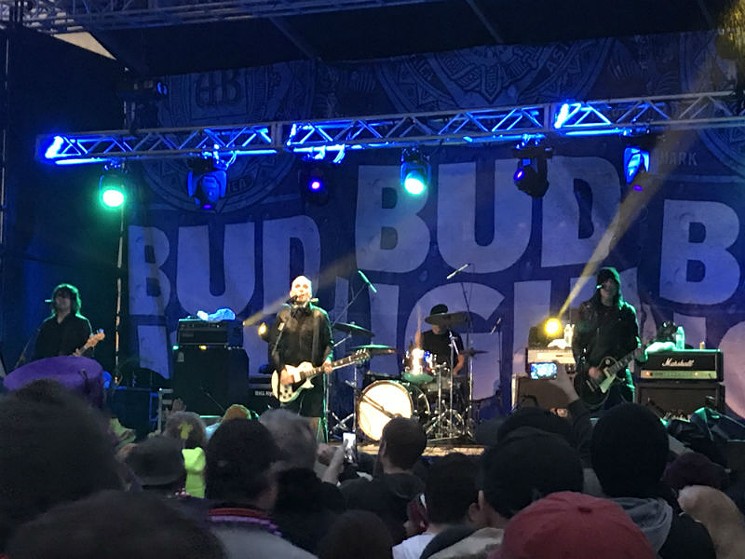 Some cousins from Chicago made the trip down and my own kids wanted to see the first weekend’s headline music act, Everclear, so we all trekked to Mardi Gras Galveston for Weekend One. The rain dampened attendance, but the band was good. We sang to "Santa Monica," ate the requisite turkey leg and begged for beads. But the best part of Mardi Gras as a spectator is seeing everything outside the festival’s gates. I’m always amazed by Galveston’s ability to restore itself following every hardship it’s ever endured. That’s a testament to its people, but it’s most evident in the places they own and operate. We went to Devil and the Deep Brewery (their Chinook IPA is a great pour), which is one of the island’s newest business endeavors. It opened February 2. The next morning, we had menudo and caldo de res at The Original Mexican Café, which has been providing sustenance to island inhabitants since 1916. In effect, our food and beverage choices for the weekend spanned a century of hurricanes, from Isaac’s storm to Hurricane Ike.

Every place has its own offbeat personality. If you swing through Texas Star Bakery on Broadway, you’ll meet the woman who has been running the place for decades, as her own parents did, and while you’re ordering some of the island’s best pan dulce she may tell you how there’s no family left to inherit the place as she once did, so it’s likely to shutter its doors in a year or two, once she’s saved enough money to travel the world and never look back to this spot on the map. 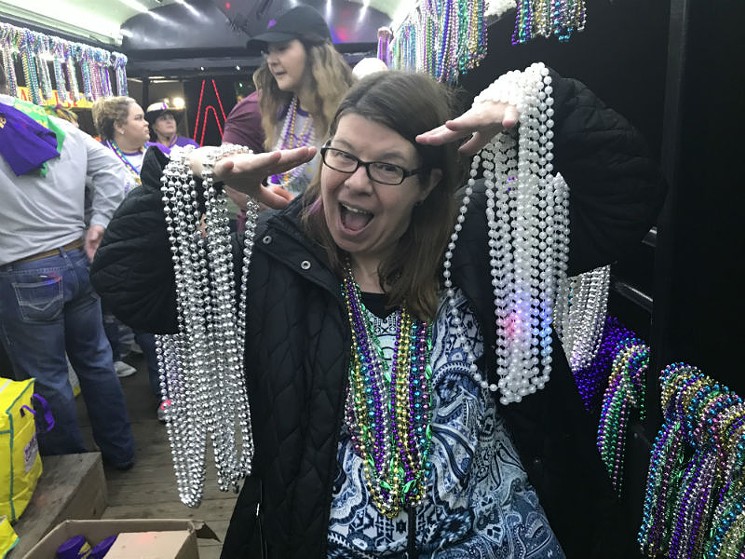 Give the people what they want: beads
Photo by Jesse Sendejas Jr.

Maybe, like us, you’ll boozily wander into Jack's Pub on Post Office at 1 a.m. The bar was once a hair salon and now serves loyal patrons cold drinks and some of the island’s best pub food. If you’re feeling peckish, the cornbread-crusted catfish and chips are a good antidote for your late-nite drunkenness. The men’s room at Jack’s boasts 14 framed photos of Marilyn Monroe. Above the doorway leading out of the single toilet, there’s a lone picture of Jack Kennedy.

Weekend Two, we participated in Mardi Gras as float riders and balcony partiers. There have been 107 iterations of Mardi Gras in Galveston. It’s the country’s third-largest Mardi Gras event and annually there are  lots of parades, more than two dozen this year alone. This was the first time I’d ever participated in any of these events from the inside. While our trip as spectators let us see the best in the island’s places, weekend two showed us the best in its people. This is no small boast. As anyone knows, Mardi Gras (in Galveston, to the east in New Orleans or practically anywhere else) is often associated with the worst in humanity, the sinfulness we’re theoretically purging by the end of Fat Tuesday and ahead of some period of atonement.


The particulars of how we got onto a Mardi Gras! Galveston parade float are hazy to me. My wife and I were invited, we signed a waiver and showed up on time at the appointed site.  We gathered behind the Harbor House Hotel at Pier 21 as part of the Krewe de Yaga parade. My wife and I were invited to ride aboard a float sponsored by Gulf Coast Bail Bonds. Most of our group were employees of the company, but were close enough to be family. Many are actually related to each other and our way onto the float came courtesy of my cousin, Lisa, and her best friend, Tammy, who owns the business.

Our float was a bus-and trailer-type dubbed the Dancing Queen. Ear-shattering music blared from whatever speakers were affixed to the thing and the deejay was playing only all-time favorites – The Jacksons’ “Shake Your Body,” Rick James’ “Super Freak,” K.C. and the Sunshine Band’s “That’s the Way.” We circled the parade route a few times. Because the rain kept the crowds down, we saw the same faces on our second and third go-rounds, exuberant parade-goers who asserted themselves as the party people, drizzle be damned. A pair of grade school aged girls shimmied on the sidewalk for beads. They were wearing so many it's a wonder they were able to stand straight against their weight.  One fellow, who we’ll call the Dancin' Machine, glided across the Strand’s sidewalks, block after block, right alongside the Dancing Queen. The music would change and he’d break out new moves but never stopped dancing. We tried tossing him beads or the promotional items the company had packed to share with people lined along the parade route, but he eschewed them all, content to bring his one-man-dance-party to life. 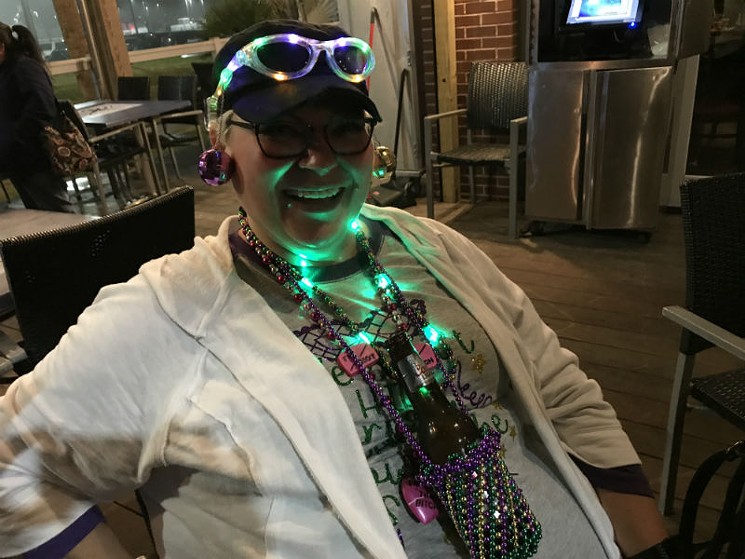 Our friend Tammy was our ticket onto a parade float
Photo by Jesse Sendejas Jr.

It’s weird to say, but being part of the parade actually created more moments to connect with others than standing amidst them on the streets. My wife said the best instances were when she’d spot someone in the crowd who was really enthusiastic for beads. They’d connect eye to eye, like a pitcher and catcher agreeing on the next pitch, and then when the beads were delivered with Dallas Keuchel-like precision from the float to the sidewalk, they’d smile or laugh at their shared success. How many occasions in life do we have to connect so merrily with total strangers that way, even for a moment as fleeting as passing them in a parade?  You take those moments where you can get them, I say.

You still have a chance to get to Galveston and experience Mardi Gras island-style this year. The 2018 version closes with the Mystic Krewe of Aquarius' 22nd Annual Fat Tuesday Parade. The event kicks off at 6:30 p.m. Tuesday night.  For more details, visit the Mardi Gras! Galveston website.