Is the Marvel Cinematic Universe on the Road to Secret Wars? 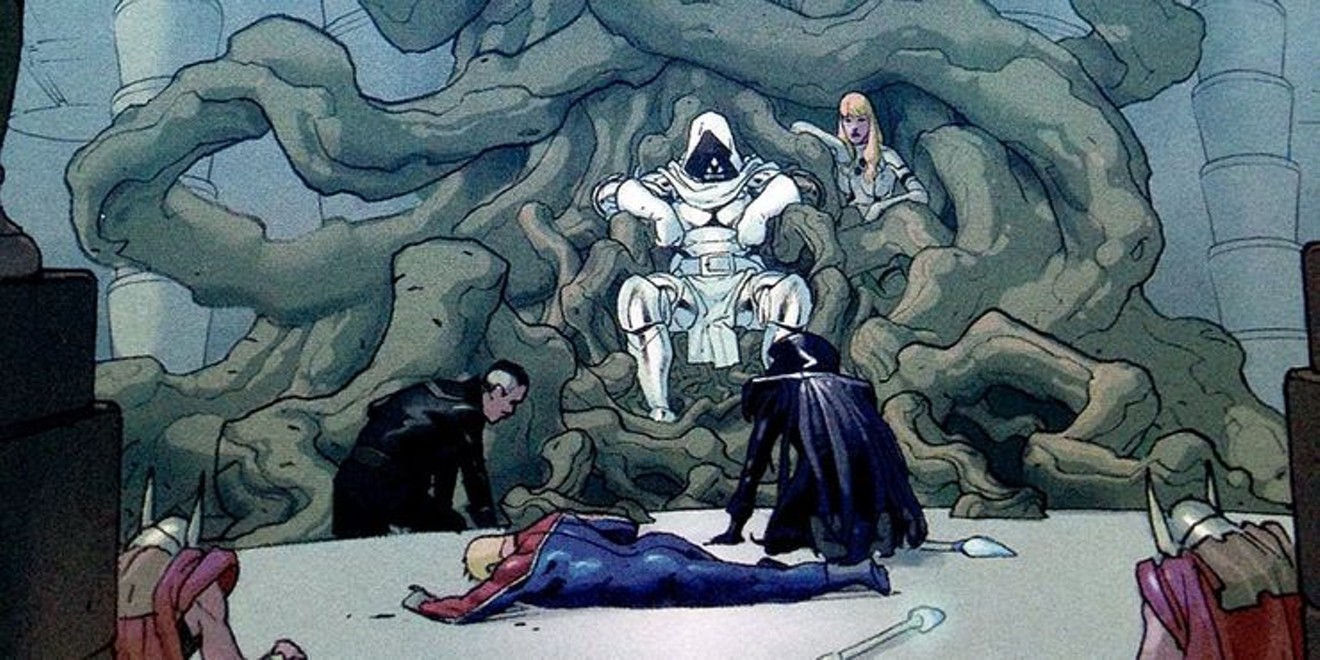 God-Emperor Doom on his throne in Battleworld Screengrab from Secret Wars
As the next phase of the Marvel Cinematic Universe gets properly underway with a combination of movies and television shows, the big question is what will the next Endgame look like. Who will be the new Thanos, a cosmic threat that gathers all our heroes together for a massive fight for survival?

My guess is that the MCU is laying down the foundation for it to be Doctor Doom and an adaption of the 2015 mega-crossover event Secret Wars.

The series was both a storyline and a solution for a practical problem. The Ultimate line of Marvel comics was coming to an end, and the company wanted to find away to introduce break-out fan favorite Miles Morales into the mainstream continuity. To a lesser extent, they also wanted to find room for other characters from different universes like Old Man Logan.

What they did was set it up so that different universes were crashing in on each other. With little hope left, Doom, Dr. Strange, and the Molecule Man devised a plan to salvage chunks of different realities and combine them into one patchwork universe. Doom being Doom, took over and created Battleworld, a realm where different facets of the multiverse would swear allegiance to him as God-Emperor. Think of it like Game of Thrones where Doom sits on the Iron Throne.

The MCU has a similar problem to fix right now. They have the rights to the X-Men characters back again and no real way to put them in the current world they have built. It’s hard to have a set of players who represent a long-time oppressed minority that no one has heard of in the 80 years of Marvel Earth history represented in current crop of films and TV shows.

The obvious answer is multiverse, something that WandaVision teased by having Evan Peeters, known for playing the X-Menverse version of Quicksilver, guest star as Scarlet Witch’s dead brother Pietro. That turned out to be a red herring, but we know for a fact that the MCU is starting to embrace the multiverse concept.

The next Dr. Strange film openly delves into alternate dimensions based on the title, Multiverse of Madness. Scarlet Witch is known to star in the film, as is Tom Holland’s Spider-man. Spidey is about to have his own dimension hopping adventure in No Way Home, where villains from previous, unrelated Spider-man movies as well as possibly other Spider-men are rumored to be appearing.

Opening the multiverse is a simple way to see an alternative world where mutants already existed and even interacted with the current crop of heroes and villains. Once that concept is established, entire movies can be made where, say, Wolverine and Hulk have their epic showdowns without sacrificing the carefully constructed world built over the last decade.

I think it’s telling that the end of Marvel Phase 4 is slated to finish off with Fantastic Four. While I could personally care less about Marvel’s First Family, I’ve always been excited for the rights to Doom to be returned to the MCU. He’s by far the most compelling villain in the company’s entire history, and his absence has always created a massive hole in the franchise.

Much as Avengers did in Phase 1, I expect Fantastic Four to end with a teaser showing Doom as the person pulling the strings on whatever conflict is occurring by then. If they slowly and carefully establish Doom as a cosmic threat the way they did with Thanos, the setting will be ripe for a multiverse cataclysm where Doom establishes the Battleworld and all bets are off on what realities can be shaped into the new paradigm. The X-Men, Deadpool, Blade, Defenders, Agents of S.H.I.E.L.D., maybe even Man-Thing can easily find a home on a new clean slate from which the next epic trilogy can be built.

This is all just a theory, but I think it’s one of the clearest paths forward for the tangled mess of Marvel movies that have existed since the 1990s. One of the best things about the MCU is just how tightly it all fits together canonically. Secret Wars can be the thread that sews it all together, with Doom holding the needle. I guess we’ll see if I’m right in 2023.
KEEP THE HOUSTON PRESS FREE... Since we started the Houston Press, it has been defined as the free, independent voice of Houston, and we'd like to keep it that way. With local media under siege, it's more important than ever for us to rally support behind funding our local journalism. You can help by participating in our "I Support" program, allowing us to keep offering readers access to our incisive coverage of local news, food and culture with no paywalls.
Make a one-time donation today for as little as $1.