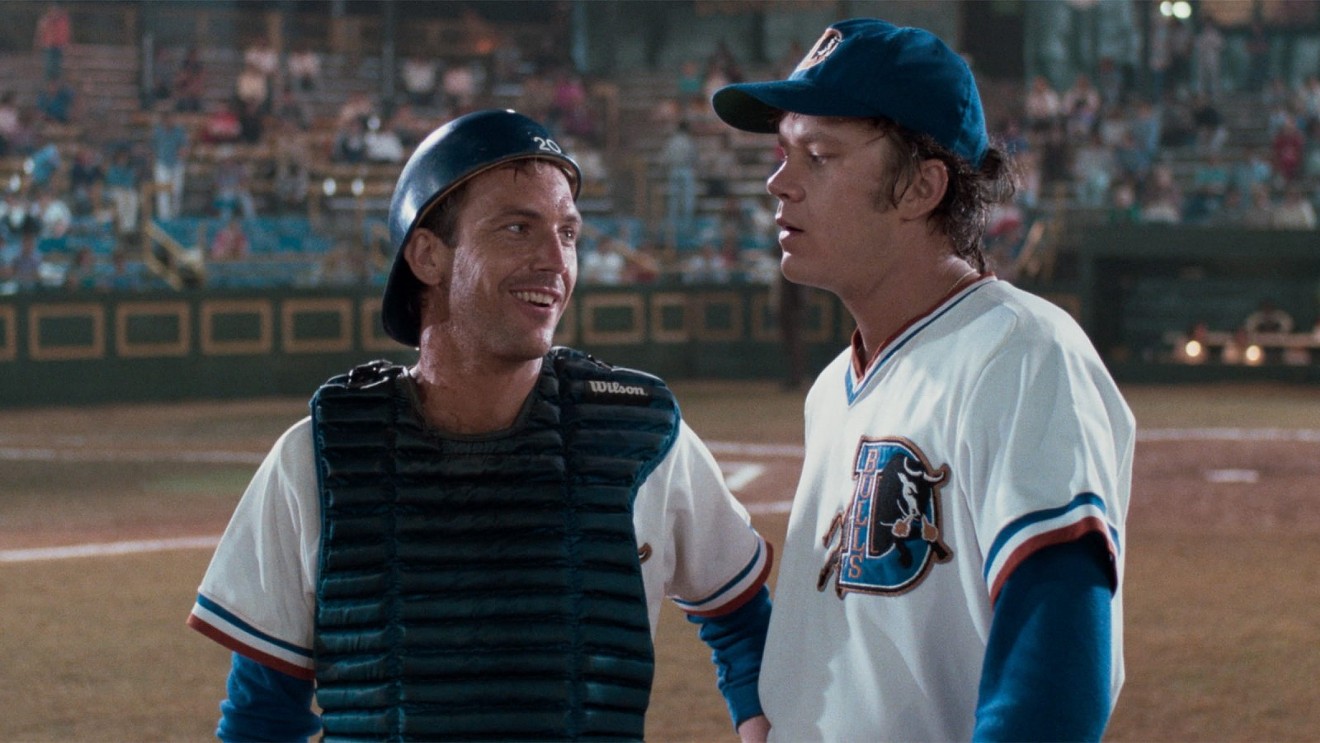 Kevin Costner (left) mentors Tim Robbins in the classic Bull Durham Screenshot
Sports fans get bored easily. Now, compound that with a prolonged absence from sports and perhaps quarantine conditions with family. Suddenly, you have a damn panic on your hands. Instead of freaking out, settle in for some greats sports movies to pass the time. There are a LOT of them, but here we'll stick with ten that, for us, represent some of the best and most entertaining of all time.

There are certainly some omissions from this list including Rudy, Chariots of Fire, Foxcatcher, The Wrestler, Pride of the Yankees, Ali, Miracle and others — feel free to add those to your personal lists — but we had some criteria. We wanted to focus more on athletes than the stories around them. That, sadly, left off Moneyball. We also wanted to go for relevance, so much older films or movies about less popular sports got the boot. That doesn't mean they weren't good. You should dig deeper and find them all. God knows, you have the time.

We would also like to provide an honorable mention in tribute to the recently departed Max Von Sydow: Victory. It also stars someone from our list below and is a hell of a soccer-slash-war movie. See, you already have nine movies for your list even before you read our 10. Have fun!

The sports comedy has never been better than this golf classic. It's ridiculous and hilarious and filled with comedy superstars including Bill Murray, Ted Knight, Rodney Dangerfield and Chevy Chase. It is the movie that set the stage for other sports comedies like Dodgeball, Major League, Talladega Nights and Happy Gilmore.

Spike Lee's long love affair with basketball is well documented with his constant presence at Knicks games. In a complex and dramatic plot, Lee's film stars former NBA star Ray Allen as a young basketball prospect courted by the governor's alma mater. He offers the release of Allen's father (Denzel Washington) from prison as incentive.

This sweeping baseball classic is touching and beautifully shot (a more nuanced version of Robert Redford's The Natural). Kevin Costner, who played minor league baseball, stars in one of his best of his many sports-themed performances (Tin Cup, For Love of the Game, Draft Day, Fastball) as a sweet portrait of how sports links fathers and sons.

Robert De Niro won an Academy Award for his portrayal of Jake LaMotta, a vicious and emotionally volatile prize fighter in the 1940s. Directed by Martin Scorsese, this is a much darker vision of boxing than seen in other films like one also on this list. A brilliant black and white illustration of Scorsese's vision of the kinds of characters we see in his other films, it was the predecessor to movies like Clint Eastwood's Million Dollar Baby.

Despite hockey not being one of the big three of the sports world, this film is one of the most beloved sports movies of all time. Starring Paul Newman, the comedy depicts a minor league hockey team using toughness and determination to not only win games but lift the spirits of the blue collar town where it plays amidst the threats of factory layoffs. Also, it's funny as hell.

League of Their Own

Very few movie quotes have been as repeated as Tom Hanks's "there's no crying in baseball" from Penny Marshall's beloved classic about a women's professional baseball during wartime. Hanks is hilarious as the drunk former ballplayer coaxed into coaching the league and the relationship between sisters Gina Davis and Lori Petty helps drive a story that includes performances by Rosie O'Donnell and Madonna.

The movie that launched a legendary string of boxing films won an Academy Award for best picture and turned Sylvester Stallone into a household name. The gritty and heartwarming tale of Philly boxer Rocky Balboa is surprising with real depth and more than just fight scenes, like its many sequels. But, we do really love Rocky III and Rocky IV if we're being honest.

This fascinating documentary following two young ball players in high school in their attempts to reach the NBA. As much a story of family and the inequities in society, particularly for poor African American kids like the ones in the film. It is a fascinating look at the real world of sports in the vein of other great sports documentaries like Murderball and When We Were Kings.

Kevin Costner takes another turn at baseball, this time as long-time catcher Crash Davis, recruited for his swan song by the Durham Bulls to mentor young pitcher "Nuke" LaLoosh (Tim Robbins) on his way to the majors. The film also stars Susan Sarandon as the eccentric Annie, who tutors Nuke in the ways of the heart, while ultimately falling for Davis. It's a movie with a lot of laughs and a ton of heart.

Uplifting sports movies like Remember the Titans and Glory Road owe their existence to Hoosiers, the feel-good story of a small town Indiana high school team and their coach, Norman Dale (Gene Hackman) whose checkered past threatens the team's prospects. Hackman is brilliant as the caring but tough Dale, but it is Dennis Hopper who steals the show as the basketball-loving town drunk and father of one of the team's players.
KEEP THE HOUSTON PRESS FREE... Since we started the Houston Press, it has been defined as the free, independent voice of Houston, and we'd like to keep it that way. With local media under siege, it's more important than ever for us to rally support behind funding our local journalism. You can help by participating in our "I Support" program, allowing us to keep offering readers access to our incisive coverage of local news, food and culture with no paywalls.
Make a one-time donation today for as little as $1.