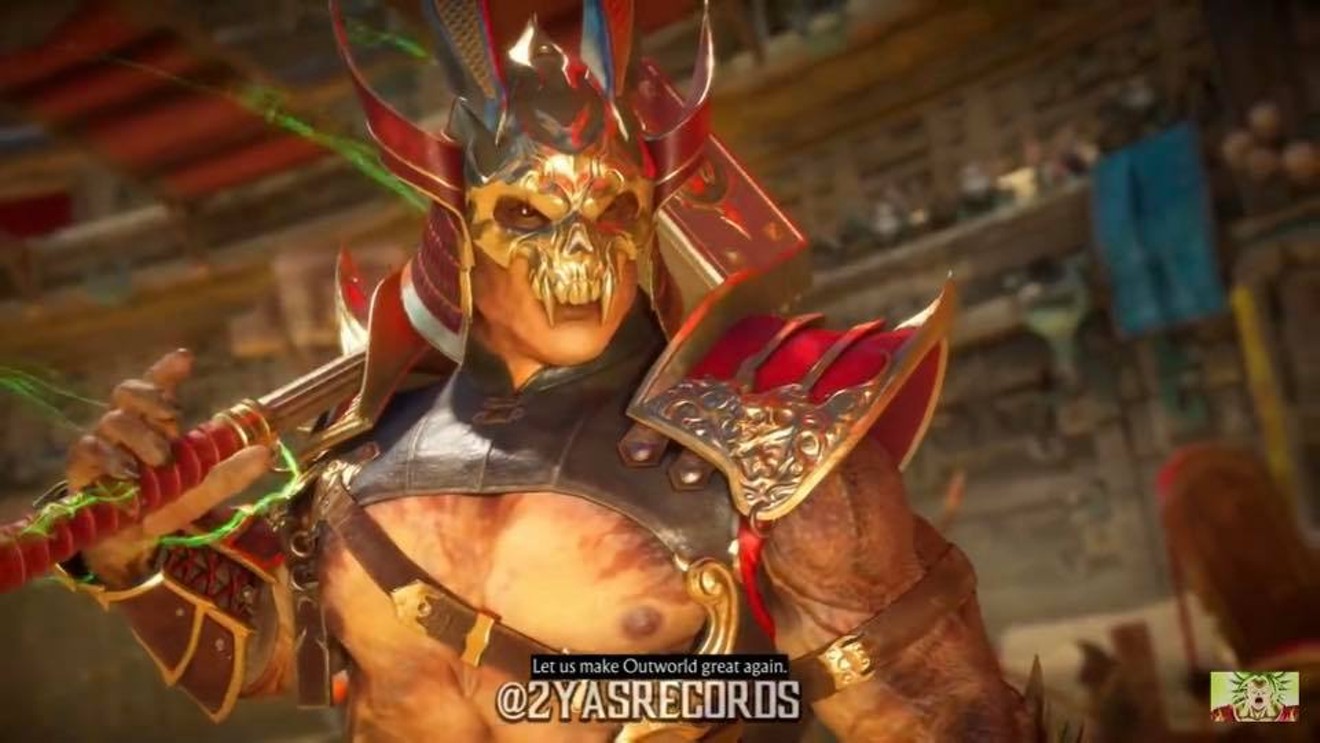 Shout out to TuYasRecords, where I watch a LOT of NatherRealm dialogue videos Screengrab from Youtube
My second favorite thing about Mortal Kombat (and Injustice) games after the stellar story modes is the pre-fight banter between characters. It’s a really good way to add some narrative without burdening the story mode with baggage. Mortal Kombat 11 is no different. We learn a lot of thing from the traded barbs. Jacqui and Takeda are engaged (yay!), Ferra/Tor is dead (boo!), and Kotal Kahn and D’vorah apparently were sex buddies (…!). Oh, and apparently Shao Kahn has been watching Donald Trump speeches.

In an exchange with Kollector, Shao Kahn praises Kollector for remaining loyal for the 25 years between his death and temporal resurrection. Kollector says something sniveling, and Shao Kahn responds that they’ll “make Outworld great again.”

Now, I’d say it’s pretty clear this is not meant as a compliment to Shao Kahn. He ends this game getting his throat slit by his adopted daughter, who got so sick of his scheming and heartless cruelty that she united the oppressed races against him and repaired his disastrous foreign policy. I’d say having a woman succeed the brutal ruler on the throne was a very on-the-nose reference to American politics.

In one fatality Shao Kahn uses his war hammer in a golf swing to knock an opponent’s head out of their own ass. It’s a neat move on its own, but after hearing the connection to Trump, an avid (and allegedly cheating) golfer, it feels more meaningful. Finally, his chief lackey in this game is a greed-obsessed thug who is basically a six-armed version of Paul Manafort.

Nonetheless, various gamers are convinced that the allusion to Trump actually makes Trump look better. Apparently being compared to a brutal, untrustworthy warlord who can’t win by the rules and is eventually eaten by the authorities when they catch up with his crimes is a good thing in #MAGA world. Here are some reactions on Twitter.

Screengrab from Twitter
The references to Jax’s ending are another disappointing backlash from regressive gamers. He uses time magic to make it so that chattel slavery and African colonialism never occurred, so things are much more Wakanda than they are now. A lot of gamers felt this was an “SJW agenda” or “racist,” because frankly a lot of gamers are complete garbage.

There’s no doubt Mortal Kombat has grown more progressive since the reboot in 2011. Mortal Kombat X did away with sexist costumes for the female characters and expanded their roster to include more women and people of color. They even added a canonically gay character in Kung Jin. Mortal Kombat 11 continued the trend, elevating three female characters (Frost, Sheeva, and Kitana) to major leadership roles in various factions and expanded the mythology to include two goddesses (Kronika and Cetrion). There are even a few anti-regressive digs, such as Noob Saibot telling Frost that he would not have let women be part of the Lin Kuei.

Taken all together, it’s clear Mortal Kombat writers are taking the piss out of Trump with the line, no matter what the more meat-headed parts of the gaming community think. The only thing Shao Kahn ends up doing to make Outworld great again is bleeding out on the sand while a competent woman ends his authoritarian nonsense.

God, I love this series.
KEEP THE HOUSTON PRESS FREE... Since we started the Houston Press, it has been defined as the free, independent voice of Houston, and we'd like to keep it that way. With local media under siege, it's more important than ever for us to rally support behind funding our local journalism. You can help by participating in our "I Support" program, allowing us to keep offering readers access to our incisive coverage of local news, food and culture with no paywalls.
Make a one-time donation today for as little as $1.