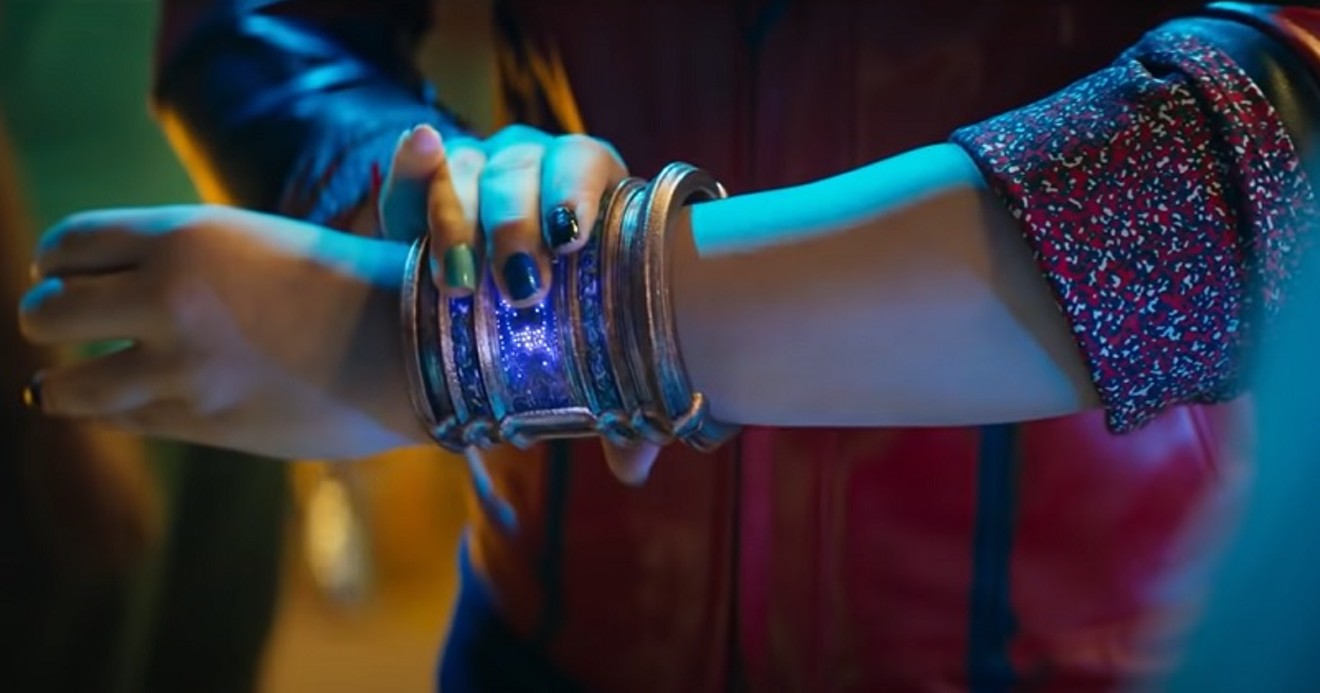 There's a lot happening with this jewelry. Screencap from the Ms. Marvel trailer
The trailer for Disney +’s Ms. Marvel dropped this week, giving fans a look at one of the most beloved of modern superheroes and the Marvel Cinematic Universe’s first Muslim hero played by Iman Vellani. The show will explore the life of superhero-obsessed Kamala Khan, who spends most of her time daydreaming about becoming just like her idol, Captain Marvel. One day, she develops powers of her own and begins to fight crime in New Jersey under a name inspired by Carol Danvers.

One thing that has had fans worried was the report that Kamala would not have the same powers she does in the comics, which included super stretching and size manipulation. That was confirmed in the trailer, when she showed of a set of strange bracelets and the ability to make solid energy projections rather than her traditional moveset.

There are some theories as to why Disney and Marvel went this direction.

In the comics, Kamala is an Inhuman, a race of humans who were genetically experimented on by the spacefaring and warlike Kree race. Inhumans often develop superhuman abilities after being exposed to terrigen crystals, which causes them to enter a cocoon and emerge with power. This background was used extensively in the show Agents of S.H.I.E.L.D. which partially focused on an Inhuman operative.

Despite Inhumans being a big part of the MCU, it’s not surprising that Kamala has been culled from their ranks. The profile of the Inhumans was raised by Marvel considerably in the last decade as they tried to use the race as a replacement for mutants, whose film rights were held by Fox. Marvel and Disney had no desire to provide Fox with lucrative storylines for free, so they rebranded the Inhumans as an oppressed minority of genetically separate humans. Kamala Khan was one of these.

Things have changed much since the Disney/Fox merger. Now, Marvel will be able to do whatever mutant storyline they want, and it’s expected the Inhumans will fade further into the background. There has been no word on whether prominent MCU Inhumans like Quake (Chloe Bennet) will be in future projects, but the removing Kamala from the race’s ranks doesn’t bode well.

There’s also the fact that Kamala will soon have stretchy power competition in a big way. Marvel has already announced that Phase 4 will end with the introduction of the Fantastic Four next year. Their leader, Reed Richards, is one of comicdom’s most famous stretchy superheroes, something that would make Kamala somewhat redundant. Though no concrete plans have been announced, it’s almost certain that Richards will fill the hole left by Tony Stark as the MCU’s most accomplished scientific mind.

It makes sense to switch Kamala to a more mystical and cosmic origin story like that of Carol Danvers, especially as her bracelets hint of some big happenings in the future of the MCU. In Shang-Chi, the titular hero uses a set of very powerful rings to augment his martial arts prowess. During the credits, there is a scene where Captain Marvel remarks she hasn’t seen anything like his rings, though they are definitely alien.

Kamala’s bracelets in the trailer appear very similar to Shang-Chi’s rings, possibly indicating they have a shared origin. With Carol already apparently investigating the origin of such weapons, it would make sense for her to contact Kamala. That would set the stage for Captain Marvel and her biggest fan to team up for the upcoming movie The Marvels, to be released next February.

In the meantime, it still looks like Kamala has the ability to make her fists big and smash things, so it’s clear the spirit of the original comic is present. While her origins may have changed, one look at the trailer shows that what makes her so irresistible will still be on hand.

Ms. Marvel premiers on Disney + on June 8. Watch the trailer below.