In Savage Journey, Peter Richardson casts a dispassionate eye on Hunter S. Thompson, seated here at his desk in his fortified compound near Woody Creek, CO. Photo by Helen Davis, licensed under the Creative Commons Attribution-Share Alike 4.0 International license.
Certain individuals among us – primarily those of us who were once teenage males, fancied themselves writers, and edited their high school newspapers during the 1970s – could recite this passage from Fear and Loathing in Las Vegas verbatim:

"We were somewhere around Barstow on the edge of the desert when the drugs began to take hold. I remember saying something like `I feel a bit lightheaded; maybe you should drive…' And suddenly there was a terrible roar all around us and the sky was full of what looked like huge bats, all swooping and screeching and diving around the car, which was going about a hundred miles an hour with the top down to Las Vegas."

Hunter S. Thompson was our avatar. He showed us how to write. How to live. How to stick it to The Man. 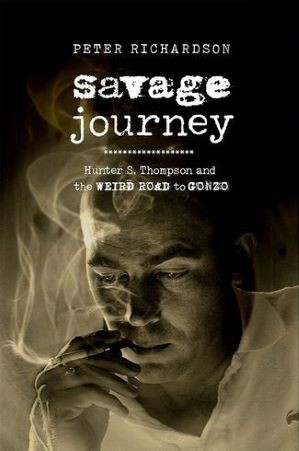 Book Cover
Well, that was then. Decades later, in the cold gray light of dawn, Peter Richardson has cast a dispassionate eye on Thompson and his literary legacy in Savage Journey: Hunter S. Thompson and the Weird Road to Gonzo (University of California Press, 271pp. $26.95). This is not a collection of “Hunter stories,” which tend to revolve around Thompson’s drug use and the resulting conflagrations (some literal, some metaphorical). There are other books for that.  E. Jean Carroll’s Hunter – The Strange and Savage Life of Hunter S. Thompson comes to mind. Rather, Richardson presents a thoughtful (and at times academic) examination of Thompson’s best work, his impact on journalism, and the price that he paid for those years when he burned the candle at both ends and in the middle.

Thompson operated under the umbrella of “New Journalism,” along with contemporaries like Tom Wolfe (The Electric Kool-Aid Acid Test), Truman Capote (In Cold Blood), and Terry Southern (Red Dirt Marijuana and Other Tastes). What distinguished these writers from those who came before them was the use of fiction techniques in a nonfiction context. In some cases (like Thompson’s), New Journalists introduced what might be termed “fantastical elements” into their work, often using hyperbole to make a point.

Richardson explores the notion of objectivity in journalism and whether this quality is possible to attain even when writing straight news. Richardson points out that Thompson drew inspiration in this regard from Jack London (The Call of the Wild). “Like Thompson, London believed that fiction was more truthful than mere fact. ‘I have been forced to conclude that Fact, to be true, must imitate fiction,’ London wrote. ‘The creative imagination is more veracious than the voice of life.’”

A significant portion of Savage Journey examines Thompson’s work when he was at this peak, a period from 1967, when his book Hell’s Angels was published, through 1974, when Richard Nixon resigned. It was during these years that Thompson developed his unique style, which came to be called Gonzo journalism. In the Gonzo mode, the reporter is part of the story, a character in the drama, and his reactions to the event he is covering represent a significant part of the narrative.

“For years I've regarded his very existence as a monument to all the rancid genes and broken chromosomes that corrupt the possibilities of the American Dream; he was a foul caricature of himself, a man with no soul, no inner convictions, with the integrity of a hyena and the style of a poison toad.”

Beginning with “The Kentucky Derby is Decadent and Depraved,” an article published in the counterculture magazine Scanlan’s Monthly, Thompson moved from an involved spectator to a committed provocateur. What would become familiar tropes in Thompson’s writing first emerged here, later to be amped up in the Vegas book. Among them: massive drug and alcohol consumption, uneasy encounters with “straights,” pranks bordering on cruelty, large American cars, assault (by Thompson) with Mace or something similar, intimidation of those who stand in the narrator's way, and a finale in which things generally go straight to hell. In characterizing Thompson’s Gonzo approach, Richardson notes, “In effect, Thompson plans to solve the problem of mayhem with more potent mayhem.”

In some ways, Richardson believes, this article, which gained Thompson national recognition and kudos from his colleagues, represented the beginning of the end. “If the Kentucky Derby piece was a milestone in Thompson’s career, it also marked a decline in his stamina and craftsmanship,” Richardson writes. “This was no longer the Hunter who would sit down and rewrite a piece three times,” Thompson’s then-wife Sandy is quoted as saying. “He could get out a page, maybe, or a paragraph, a really neat, wild paragraph, and then some gibberish. He couldn’t come out with a full piece.” 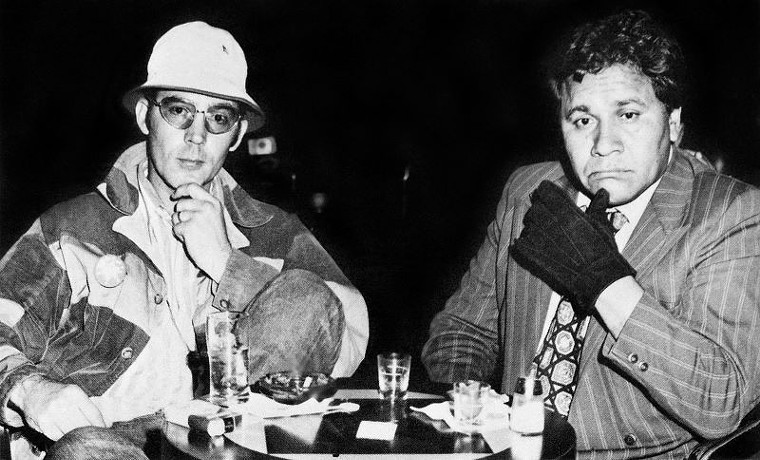 Hunter S. Thompson, along with his attorney and traveling companion Oscar Zeta Acosta, at Caesars Palace around the time of Fear and Loathing in Las Vegas.
Photo by Cashman Photo Enterprises, Inc., Public Domain
“The challenge, however, was part of a larger and more complex problem,” Richardson says. “Thompson’s life, work, and persona were recombining in a way that was simultaneously degenerate and generative. His persona, which was fixed to the new genre he was creating, became his most valuable asset. Indeed, it would eventually eclipse his literary output and outlast his most productive period.”

Richardson delivers a fine analysis of New Journalism, illustrating his points with “compare and contrast” examinations (hey, the guy is a college professor) of Thompson’s writing as it stacks up against authors like Joan Didion (Slouching Towards Bethlehem). He also references Thompson’s own comparisons, e.g.  this one regarding Tom Wolfe: “Wolfe’s problem is that he’s too crusty to participate in his stories. The people he feels comfortable with are dull as stale dog shit, and the people who seem to fascinate him as a writer are so weird that they make him nervous.”

Ahab needed the whale, Holmes needed Moriarty, and the coyote needed the roadrunner. In the case of Thompson, it was Nixon who brought out his best – and certainly most vicious - writing. Nixon, Richardson believes, was Thompson’s muse, and his argument is convincing when considering Thompson passages like, “Richard Nixon has never been one of my favorite people, anyway. For years I've regarded his very existence as a monument to all the rancid genes and broken chromosomes that corrupt the possibilities of the American Dream; he was a foul caricature of himself, a man with no soul, no inner convictions, with the integrity of a hyena and the style of a poison toad.”

Hunter S. Thompson and candidate George McGovern deep in conversation during the 1972 presidential campaign.
Photo by Annie Leibovitz, Public Domain
Just as Thompson’s writing mojo was starting to fade, Gary Trudeau introduced a character named Uncle Duke in his comic strip “Doonesbury.” There was no doubt that Duke was Thompson and Thompson was Duke. “Uncle Duke was bald, wore Hawaiian shirts, and sported a cigarette holder. He wrote for Rolling Stone, consumed vast quantities of alcohol and drugs, and was usually armed,” Richardson writes.
According to Richardson, “Thompson hated the character and often denounced Trudeau. Perhaps more than any other single source, however, “Doonesbury” reinforced Thompson’s celebrity well after his literary output had peaked.”

Richardson uses a substantial number of lengthy Thompson quotes throughout the book, but why not? They support his contentions, and they are fun.
When writing about someone like Thompson, who frequently weaponized the language, it would be a disservice to deprive readers of his singular, angry verbiage.  Case in point:

“It is Nixon himself who represents that dark, venal and incurably violent side of the American character that almost every country in the world has learned to fear and despise. Our Barbie-doll president, with his Barbie-doll wife and his boxful of Barbie-doll children is also America's answer to the monstrous Mr. Hyde. He speaks for the Werewolf in us; the bully, the predatory shyster who turns into something unspeakable, full of claws and bleeding string-warts on nights when the moon comes too close.”
KEEP THE HOUSTON PRESS FREE... Since we started the Houston Press, it has been defined as the free, independent voice of Houston, and we'd like to keep it that way. With local media under siege, it's more important than ever for us to rally support behind funding our local journalism. You can help by participating in our "I Support" program, allowing us to keep offering readers access to our incisive coverage of local news, food and culture with no paywalls.
Make a one-time donation today for as little as $1.