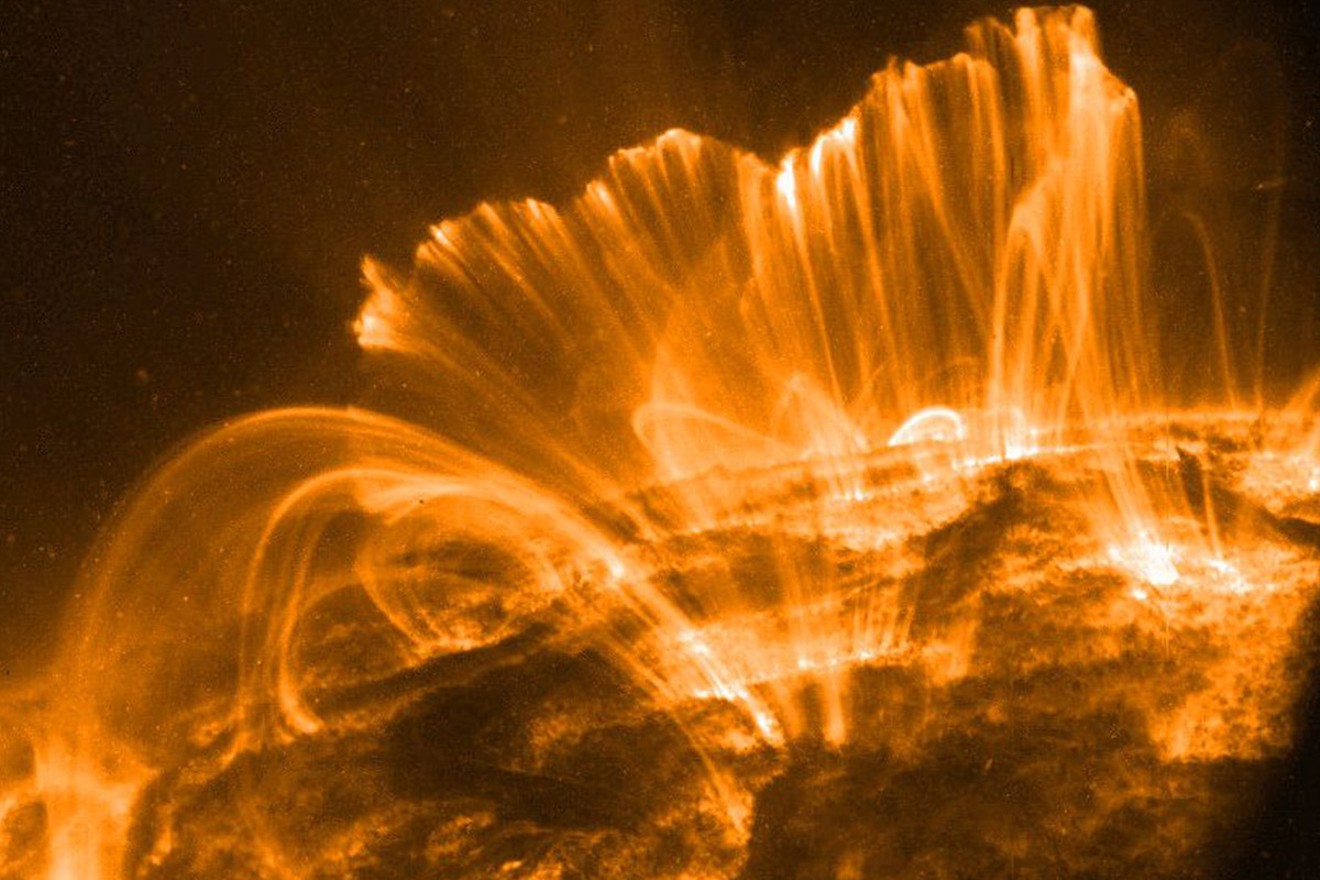 Solar flares, like this one captured by the orbiting TRACE telescope in 2017, spew forth a storm of particles that will shower satellites with high energy protons. It is followed by a coronal mass ejection that impacts Earth's magnetic field. Photo by NASA/GSFC/TRACE
With so many things to worry about these days, do we really need another? If it's not ISIS heading north from Honduras or Chinese hacking or Russian tampering, there are still plenty of natural disasters to cause angst in the Bayou City, hurricanes and flooding being at the top of that list.

We could curse science nerd and New York Times bestselling author William R. Forstchen for adding coronal proton ejections to our list of worries but, after learning the probabilities, we should thank him for shedding light on what could happen with back-to-back catastrophic solar storms.

His new book, 48 Hours, set to release January 8, unfolds this very real threat as a technological thriller, weaving complicated science throughout and embedding a morality lesson that society should stop with all the in-fighting and learn to get along. 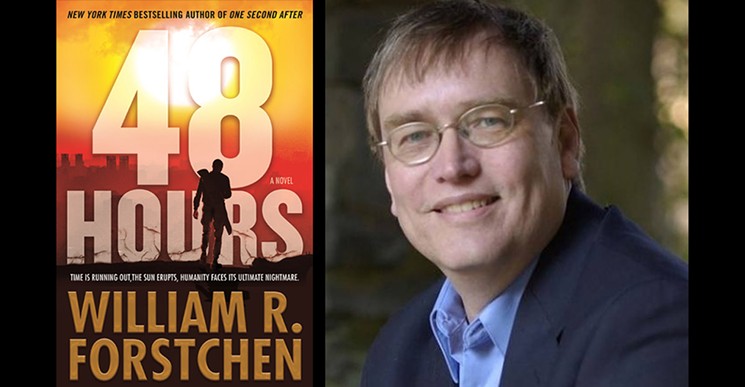 New York Times bestselling author of One Second After, William R. Forstchen, is releasing a new book in January.
Author photo by Mindy Clinard
"You don’t want the readers sitting there, cross-eyed, saying, 'This is boring, this is worse than junior high,'" says Forstchen, who uses a BB (Earth) and grapefruit (the sun) to demonstrate the probability.

"Picture a little BB orbiting around a grapefruit. At random intervals, a .24 Magnum bullet gets fired off that grapefruit and there’s an explosion. What are the odds that it’s going to hit the BB?," asks Forstchen.

In recorded history we've already had a few close calls. A solar storm in 1859 — now referred to as the Carrington Event — induced one of the largest geomagnetic storms on record. "The internet technology of the day went down: telegraphy. But it had only been around for 15 or 20 years and the wires were burning off poles, telegraph batteries were bursting into flames, even railroad ties were on fire because the metal rails were taking the charge," says Forstchen.

We had a near miss in July 2012 when a coronal mass ejection, or solar superstorm, tore through Earth's orbit. Had it occurred a week earlier we would have suffered widespread power blackouts and urban populations wouldn't even have been able to flush toilets because of water suppliers' dependence on electric pumps.

In Forstchen's book, a catastrophic solar storm peels back our planet's protective magnetosphere and, when it's followed by a second storm, it destroys the world's electrical infrastructure. "We get hit by a CME, that pulls back the magnetosphere, then the CPE [coronal proton ejection] strikes the earth’s surface. That’s game ender, an extinction level event. We might all die within two days," warns Forstchen.

"I started working on the whole issue of our electrical infrastructure in 2004 when the government put out the report of an EMP [electromagnetic pulse] attack on the electrical infrastructure. The congressional report stated we could lose the next war in one second, start to finish, if an opponent popped three nukes over the United States, about 300 miles up.


"...we could lose the next war in one second, start to finish, if an opponent popped three nukes over the United States..."

An electromagnetic disturbance overloads the power grid, the power grid is gone. The chilling part — and this is a congressional report — the casualty rate would be 90 percent of all Americans would perish within the year."

So how can governments prepare for these types of events, and how can we as individuals hedge our bets to become a ten percenter? Forstchen says Texas is better positioned than most states, but we need to shore up our systems. "The federal government has done nothing, underline nothing, to push the utility companies toward hardening the grids to survive such an event. Texas has five grids of its own."

On a personal level, Forstchen says the preppers are onto something. We can't all get off the grid, growing our own food, digging our own wells and going solar. And it's not as simple as buying a farm out towards Brenham. He says Houston has about 25 days worth of food on hand, between what's in stores and in our cupboards, so its more than two million inhabitants will soon start spreading out to keep from starving.

He suggests adding a few cans of food to your basket during each grocery run until you've stockpiled a month's worth of food. Fill up those empty soda bottles with water so you can stay hydrated. Agree on a safe spot for family members to rendezvous if all communication systems go down. For those who choose to own a firearm, be sure to go through proper training.

The National Oceanic and Atmospheric Administration is responsible for issuing forecasts of solar activity, and Forstchen also recommends the website space.com, which links to solar weather.

48 Hours
Publisher: Forge
Release date: January 8, 2019
ISBN-10: 0765397919
ISBN-13: 978-0765397911
Available from Amazon.com, Barnesandnoble.com and other online retailers.
For more information visit tor-forge.com.
KEEP THE HOUSTON PRESS FREE... Since we started the Houston Press, it has been defined as the free, independent voice of Houston, and we'd like to keep it that way. With local media under siege, it's more important than ever for us to rally support behind funding our local journalism. You can help by participating in our "I Support" program, allowing us to keep offering readers access to our incisive coverage of local news, food and culture with no paywalls.
Make a one-time donation today for as little as $1.