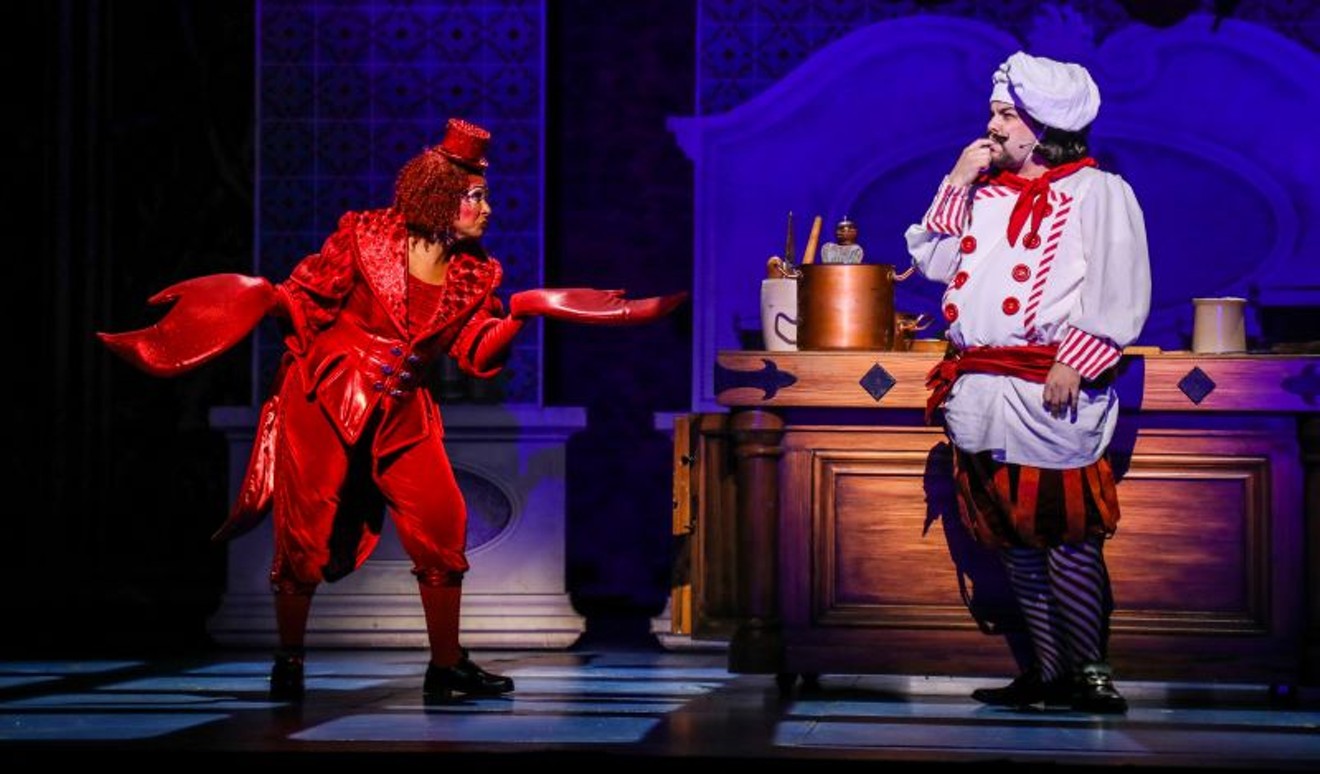 Carla Woods as Sebastian and Mark Ivy as Chef Louis in Disney's The Little Mermaid. Photo by Melissa Taylor
First, the holiday shows started canceling performances. Often at the last minute. Some productions ended their runs early while others pushed out opening dates by weeks. Then, as if COVID hadn’t done enough damage to the theater scene in Houston, an entire Broadway touring production was pulled from the schedule.

All this thanks to the surging Omicron variant that in dramatically cruel fashion hit the city just as our badly battered theater scene was beginning to bloom once again. Despite best efforts, breakthrough cases in casts and limited or no understudies meant that shows had no choice but to shutter. Actors were once again shut out of the work they love after yearning for two years to get back in front of a live audience.

“It feels very triggering to March 2020 because it wasn’t too long ago that this happened to all of us”, says Mark Ivy who was performing in The Little Mermaid at TUTS when breakthrough cases started popping up in the cast.

“We were doing amazing work on testing protocols in line with CDC and Actor’s Equity, “says Ivy. Then we had one positive case, but we had swings go in, and then someone had food poisoning, so another swing goes on. Then we had another positive case on Saturday, this was around the same time NYC shows were closing and lots of Houston artists were testing positive so the air was very much like what do we do? How many cases does it take to shut the show?”

Initially, Ivy hoped they would shut down only for the weekend and pick things back up. But further testing told a different story and the decision was made to cancel the final week of the show.

“The last couple of weeks have felt like I'm moving through the world floating. I've had friends ask how I'm doing and I'm like OK, I’m grateful I have my health and that those in the company who tested are fine”, says Ivy. But it makes me really sad, last year I think it took me six months to even sing again I was so depressed about my livelihood. It just feels like this is all I’ve ever known and done. It’s where I feel confident in my work.”

For Karina Pal Montano-Bowers, the decision to cancel came before the show she was cast in even got off the ground. Brian Jucha’s They Do Not Move at Catastrophic Theatre was slated to begin performances on February 11, with rehearsals starting January 3. But as cases started popping up over the holidays, there was concern about the safety of moving ahead.

“Our show was very physical and intimate so we discussed what we were comfortable with”, says Montano-Bowers. “We didn’t see a way around being able to create the piece and feel safe. We didn’t even see how we could start the creative process without risking everybody.”

Like any artist who has an opportunity taken away, Montano-Bowers was disappointed. But in this case, that disappointment was twofold as she saw history repeating itself. They Do Not Move was slated to run before the first shutdown in 2020, so this cancellation felt like being kicked just as you’re finally getting up from an earlier pummeling.

“We were so hopeful that the show was going to finally happen as we were seeing more shows go up, but then we started hearing about shows on Broadway shutting down and more people testing positive in casts”, says Montano-Bowers. “To postpone it again is super disappointing and I’m supposed to go into rehearsals for a show coming up in February and who knows if that’s going to happen”

All things seem to be going ahead for Avery Vonn Kenyatta, a cast member in the upcoming Dance Nation at Rec Room Theater. That is, going ahead after the company decided to postpone the show’s opening by a few weeks, disrupting the rehearsal mid-stream in the process.

Kenyatta is pragmatic about the experience. “Navigating this business during this period is the art of pivoting,” says Kenyatta. “It’s been so long since we’ve been able to freely work on our craft it’s been challenging. This is what we do, how we attain happiness, pay our bills, so it’s not a happy feeling. We want a full run of a show but you have to roll with the punches.”

Easy to say, but with such uncertainly still clouding productions, it’s hard for these actors not to feel on edge about their careers and the industry as a whole.

“I don’t even know if what I do, what I love is even going to be the same”, says Montano-Bowers. “I can’t imagine sitting in a normal crowded theater watching a play like it was before. I know we’ll have to find ways to adapt and change until that time comes…but when will that be? I was hoping it would be soon, it was feeling like it was soon, but now I feel like the carpet’s been pulled out from under me.”

“It's scary to think that one breakthrough case can affect everyone’s artistic process”, says Kenyatta. “For me, it's not helpful to live in anxiety and fear, so the way my mind works, I try to be as optimistic as possible right up until the point that it’s not a thing.”

Thinking about these recent closings and postponements, Ivy is more frustrated now than ever. COVID, he thinks, isn’t going away any time soon and no one, he believes, is figuring out how theater can exist in this space.

And yet still, with all this uncertainly and vexation, all three actors say they aren’t prepared to give up on theater. Sure, they have side jobs. Bills need to be paid. But even after the roller coaster of the last two
years and no clear future ahead, their love for the craft wins out.

“There’s nothing I’d rather be doing than performing,” says Ivy. “So, I just hope this one is a quickie.”
KEEP THE HOUSTON PRESS FREE... Since we started the Houston Press, it has been defined as the free, independent voice of Houston, and we'd like to keep it that way. With local media under siege, it's more important than ever for us to rally support behind funding our local journalism. You can help by participating in our "I Support" program, allowing us to keep offering readers access to our incisive coverage of local news, food and culture with no paywalls.
Make a one-time donation today for as little as $1.