A New Houston Theater Company: On the Verge Theatre 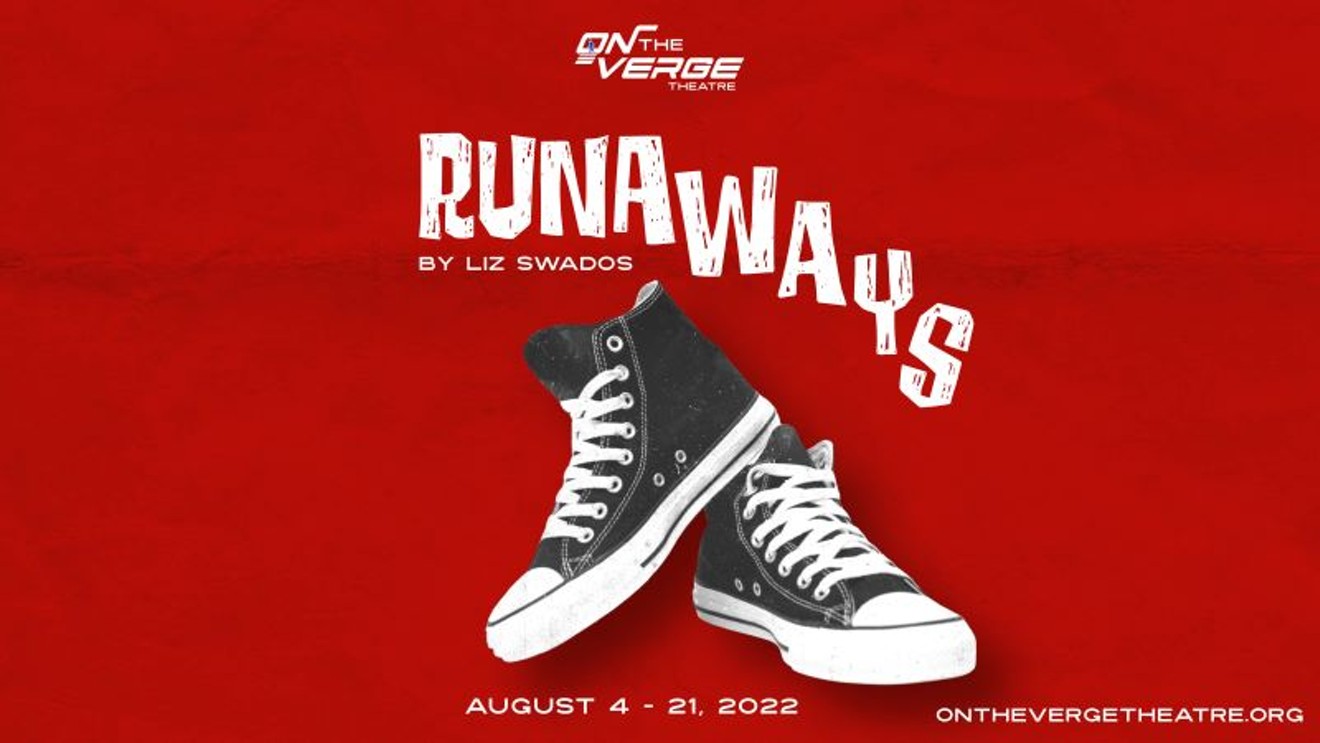 The start of a new season and a new Houston company. Poster art

What Houston really needs is another new theater company — at least that's what veteran directors Bruce Lumpkin and Ron Jones are saying as they announce plans for On the Verge Theatre whose first show Runaways will be performed this August at Queensbury Theatre.

After that there will be the world premiere of the one-man show Tied by Houston actor and playwright Crystal Rae at the Ensemble Theatre. "It's about an event that took place in 1965 in NBirmingham, Alabama, the bombing of the 16th Street Church where four little girls were killed. The bombing was done by the Ku Klux Klan. The play's about one of the father's of one of the girls who was killed," Lumpkin says.

Locations for the next two plays are yet to be determined — with some very special requirements. For the immersive Red Speedo, On the Verge is looking  for a local swimming pool and ... drum roll please ... some of the audience members will be seated in the pool along with the cast.  "That means we're going to have to have a lifeguard and a stage manager to move their floats around," Lumpkin says.

And for the other immersive — Catholic School Girls — the theater company is looking for a high school or college classroom capable of holding 100 people at a time. Audience members will be involved "as if they were students in the classroom and they'll be sitting behind desks," Lumpkin says.

It's an ambitious undertaking at a time when all theaters are on somewhat shaky ground following the pandemic but according to Lumpkin this actually levels the playing field for them, raising the chance that they'll be successful.

Lumpkin, of course, is best known in Houston as the former artistic director of Theatre Under the Stars. a job he took on almost 10 years ago in 2012 and a post he relinquished in 2016 in an abrupt and unexplained departure.

When the Houston native was named to the position he was seen as both a veteran director who appreciated everything TUTS had been doing and one ready to shake things up a little bit. In 2014, he took the shaking things up tactic a bit too far in the opinion of the authors of Hands on a Hardbody when he made several changes to the musical (he reportedly said he just changed the order of the songs) without consulting with them first. The show's creator Amanda Green was in the audience on that opening night and she was signaled her displeasure in several interviews at the time.

One of Lumpkin's most distinctive moves was to create TUTS Underground where edgier works in the smaller Zilkha Hall at the Hobby Center were staged and were designed to appeal to a younger audience as well as others who in general wanted something other than a mainstream musical. It did attract new theater goers and good critical reviews but despite immediate statements by TUTS management that it would be retained, it was instead discontinued — shutting the door on Lumpkin's hopes that it would be his enduring legacy .

In the ensuing years, Lumpkin has been engaged to direct some local productions. One such, Lady of Agreda, A Mystical Journey at Queensbury was a victim of terrible timing, closing after the third preview on March 15, 2020 because of COVID. "We had to close. It was a big blow to everyone." He has also been in New York City helping out a friend at a theater there, Lufkin said. Now he's back in Houston for this latest venture and because his youngest daughter lives with her mother here.

Jones, who recently directed the well-received Clybourne Park with Dirt Dogs Theatre Co., has been an actor, director and producer for 50 years. He has also worked as a director at Main Street Theater, The Ensemble Theater, Theatre LaB Houston, Stages, Mildred's Umbrella and a raft of others.

The pair of them have enough financial backing to last for the upcoming 2022-23 season and depending on their success, they'll also be looking for grant funding and a permanent home for the 501c3 nonprofit company, Lumpkin says.

Lumpkin says he is very interested in the possibilities of immersive theater. "I look at immersive not as confrontational. I'm one of those people who hate to be called out as an audience member. But I don't mind having to be moved from one place to the other or to have a show happen around me.  Basically it's being part of the show but not being drawn into it and asked to perform in it."

Their first show this season, Runaways, which will be done in the round, is a musical based on monologues about runaway kids, similar to A Chorus Line. Most of its cast members will be students from Houston area high schools and colleges. According to Lumpkin: "Runaways is a show that was written in 1975 by Elizabeth Swados.  She interviewed a lot of people and then wrote the monologues based on that and wrote the musical based on the monologues. And it's about runaway kids.  It was nominated for many many Tony Awards. Didn't win any. That was the the year of Ain't Misbehaving which won everything. I think the same stories that are talked about in this piece of theater exist today. I think it's important to be seen."

Tied: September 8-25 at The Ensemble Theatre. By Crystal Rae. Directed by Bruce Lumpkin.

Red Speedo: January 19 through Februrary 12, 2023 at pool to be determined. By Lucas Hnath. Directed by Ron Jones.

Catholic School Girls: April 13 through May 6, 2023 in classroom to be determined. By Casey Kurti. Directed by Jimmy Phillips.
KEEP THE HOUSTON PRESS FREE... Since we started the Houston Press, it has been defined as the free, independent voice of Houston, and we'd like to keep it that way. With local media under siege, it's more important than ever for us to rally support behind funding our local journalism. You can help by participating in our "I Support" program, allowing us to keep offering readers access to our incisive coverage of local news, food and culture with no paywalls.
Make a one-time donation today for as little as $1.