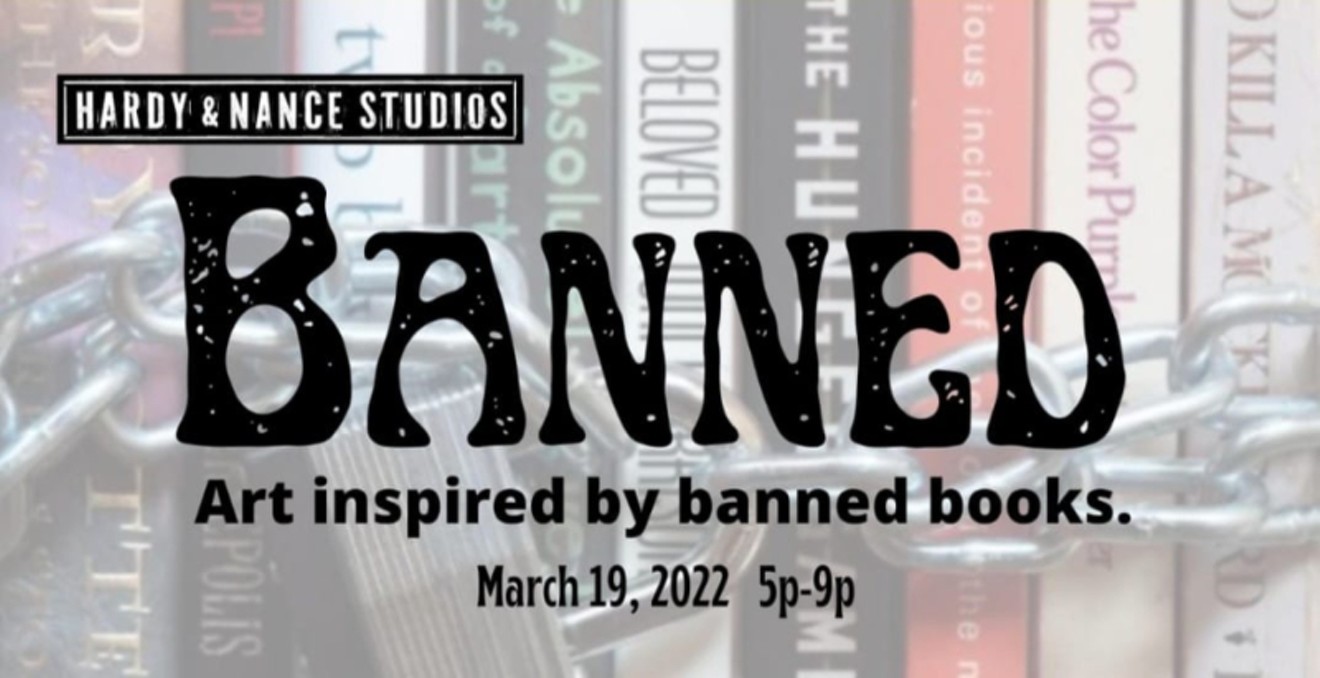 Literature just became a lot more interesting. Screen grab from hardyandnancestudios.com
As the saying goes, "Reading is fundamental." Yet, as of late, books have become one of the latest targets of sociopolitical arguments, which has resulted in a swath of literature being banned from local school districts. Most of the titles on the banned list stem from people of color and LGBTQ individuals, which raises a curious eyebrow.

Because, you know, Pulitzer Prize-winning and Nobel Prize-winning Toni Morrison is ripping apart the fabric of society with her terrifying novels of truth and humanity.

As a side note: If you're going to be a lawmaker who makes decisions about books...you might try reading one every so often. I'd suggest reading one book (or the Constitution) once every 21 years, if that's not too much to handle. You might have to take off your pants to count that high. And that's assuming you can count or read.

But whatever. <Insert eye roll/> Take a look. It's in a book. And if you don't know what that reference is, then perhaps call LeVar Burton for an enlightened point of view. But with that, I digress. Back to the news.

One silver lining around this subject is that this debate has renewed an interest in literature, and it's the Houston arts community that is stepping up this weekend to give notice to the topic. On Saturday from 5 - 9 p.m., Hardy & Nance Studios will present Banned: Art Inspired by Banned Books. In it, more than 30 artists will display their works that draw inspiration from across the boards regarding the aforementioned illicit materials.

Robin Baker and Wood Fancher Anthony of RobinWood Art Studio, one collaborative group who will display art at the event, spoke to the necessity of this act and why they got involved.

"Robin approached me about collaborating for the banned book show. He suggested we do something based off of Orwell’s Animal Farm," Anthony said. "Robin and I sat down together and reviewed several banned book lists. Many of these books are being banned for issues related to the LGBTQ community, religious views, political views, and sexuality. We did not have an idea as to how to approach any of these topics on canvas. Then, as he was leaving my house, he said we should just paint about banned books in general."

This thought evolved into the ideas about book burning and how that might be portrayed on canvas.

"In many cases, books are not only banned but also burned. I researched images of people burning books. It dawned on me that I should use animals to represent this type of human. In the end we decided to paint farm animals dancing around a pile of burning books," he added.

The final image the duo resulted with is a combination of black and white, acrylic, and oil on canvas with symbolic meaning coursing throughout the work. ‘Texas PTA Meeting’ 2022, 40x40 inches. Acrylic and oil on canvas.
Painting by Wood Fancher Anthony and Robin Baker
"The attack on knowledge is absolutely repulsive. This painting will strike a nerve with many people...as it should! It is a controversial painting about a controversial act regarding controversial books. The sacred heart will be strategically replaced by a stack of burning books," he continued. "These pigs are hypocrites, and they dance around those pious acts of banning and burning books. I’m attacking religion in this painting because religion and people’s mentalities about religion are the ultimate source of why so many books get banned."

It isn't lost on us that the apple pattern wallpaper behind the image of Jesus represents the fruit of knowledge, which the library and books can ultimately provide.

Since the event is dedicated to underscoring the power of literature, it makes perfect sense that the Houston Public Library would be invited as a guest. The organization will take part in the event to sign up library card subscribers as well as give the public a general sense of the services that are available - including reading those naughty, naughty books.

And it turns out, those naughty, naughty books aren't that naughty. Or at least they're not banned. The Houston Public Library has a policy, in fact, that they don't ban books.

"The public library is a diverse community. We want to provide as much material as we can on diverse topics, and we know that some of the topics perhaps are controversial. Some people might not like them, but we feel that it's in our best interest — and part of our mission statement — to provide a diverse set of material for people to be able to read different viewpoints on different topics," Atkins said.

That's a somewhat diplomatic answer, but it's completely understandable. The library has always been an even-ground provider for research, discovery and knowledge. Lest we forget, knowledge is power, and the key to unlock that knowledge is through a well-observed understanding of such circumstances...which is most accurately and fully-told through writing and reading.

When it comes to how the Houston Public Library selects its arsenal of literature, Atkins says the organization takes a lot into consideration.

The list includes relevance to the community's need, the suitability of subject insight into human and social conditions, the reputation of the author, the demand for material, the book's reviews in professional media, the publisher's reputation, availability and accessibility of materials in the collection on the same subject, the clarity and accuracy and logic of the presentation, and the ability of format for library use.

And while we're on the topic, access to the Houston Public Library is available online as well as in person, and it includes tens of thousands of books, streaming movies, magazines, music, databases, historical archives and a plethora of more amazement. Because it all goes back to the same theme: Reading is fundamental.

Banned: Art Inspired by Banned Books takes place from 5 - 9 p.m. Saturday at Hardy & Nance Studios, 902 Hardy Street. For information, visit hardyandnancestudios.com. Visit the Houston Public Library as well. Free.
KEEP THE HOUSTON PRESS FREE... Since we started the Houston Press, it has been defined as the free, independent voice of Houston, and we'd like to keep it that way. With local media under siege, it's more important than ever for us to rally support behind funding our local journalism. You can help by participating in our "I Support" program, allowing us to keep offering readers access to our incisive coverage of local news, food and culture with no paywalls.
Make a one-time donation today for as little as $1.