Opinion: 10 Things We Can Learn From the Downfall of Andrew Tate 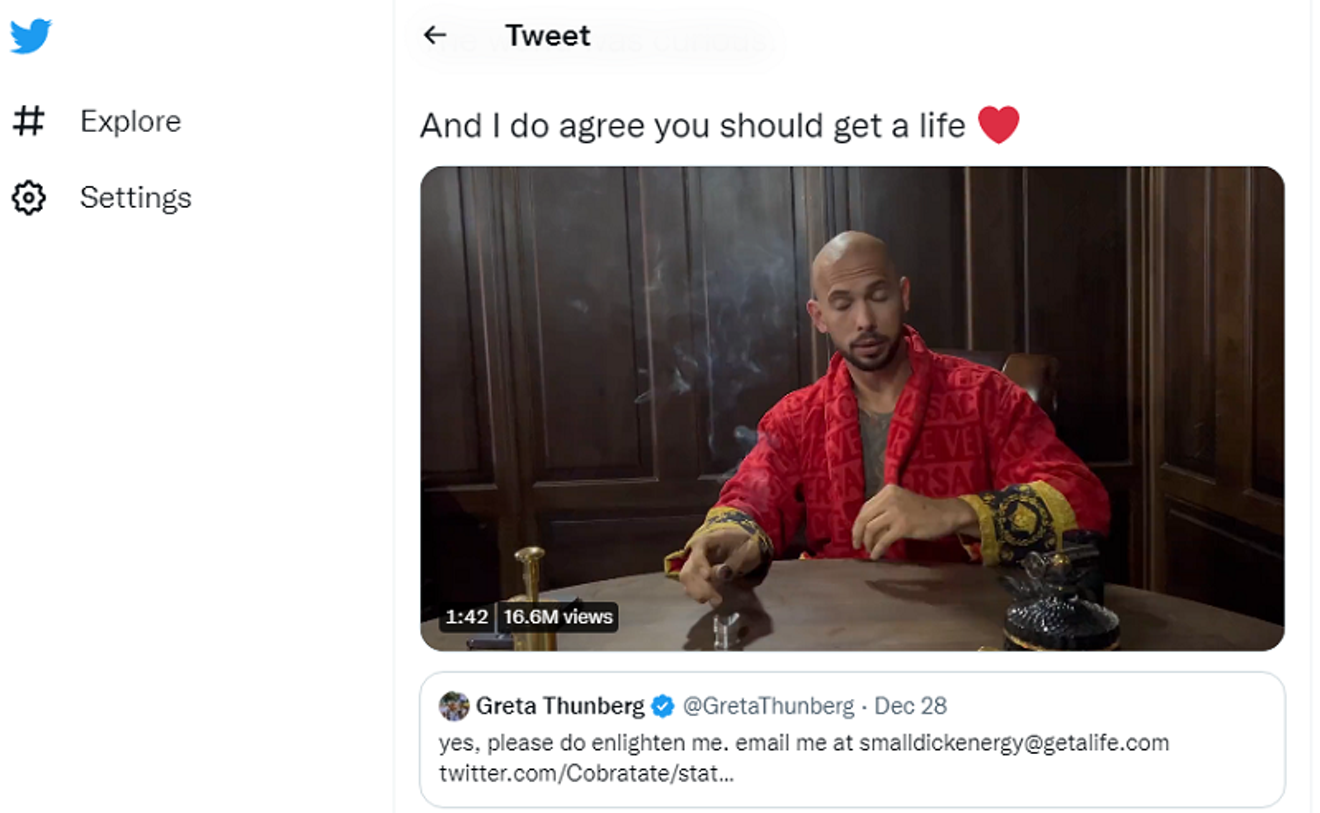 Pictured: a very silly man who is not a good person Screencap from Twitter
Andrew Tate is a former kickboxer turned raging misogynistic podcaster who built a name for himself as an alpha male guru. His blatant bigotry got him booted from most social media platforms, but he was let back onto Twitter following Elon Musk’s purchase of the company. Last week, Tate decided it would be fun to start publicly harassing teenage climate activist Greta Thunberg by telling her about his many cars. She told him to email her details at [email protected] Her insult is now one of the most popular tweets of all time.

Tate then filmed a ridiculous clapback video. Immediately following that, he and his brother were arrested by Romanian police for human trafficking, though Romanian police deny the two incidences were related. Tate has joked in the past about moving countries to escape rape charges.

Many young men look up to Tate as a model for masculinity. He is, but only in the sense that he is a good example of everything not to do. For those young men, here are ten lessons that you should take away from this.

Tate is 36-year-old man who randomly picked a fight with a teenage girl who probably didn’t even know he existed. No matter how much you hate climate activists, that is just pointless bullying. It only made Tate look like an insecure craven. Not the least because it took him hours to launch a half-hearted rebuttal. Speaking of which…

Learn to Take the L

When the person insulting you gets 2 million likes, you lost. Christ and St. Nicholas combined aren’t going to raise you from the dead after that. Tate could have simply walked away knowing he’d been beaten, but he couldn’t deal with that.

There has been a lot of whining about cancel culture and the alleged censorship of people over jokes. Rape jokes are usually brought up as case in point of what you “can’t say” anymore. To be clear, you can absolutely say rape jokes, but Tate is another example of how the people who do often aren’t really joking. That’s one of the reasons he is going to jail.

I cannot stress enough how creepy Tate tweeting at Thunberg about his big engines and powerful emissions was. It’s a transparent sexual metaphor, probably related to how green behavior is considered unmanly. Everything about the whole interactions screams “middle aged dude worried about the virility of his semen and insisting a young woman validate it.” On that note…

No Man Who Needs That Many Props is a Badass

Tate is rarely seen without cigars, whiskey, cars, dark sunglasses, or surrounded by women who are obviously paid to be there. He desperately flexes into every camera pointed at him. In short, he is a man barely duct taped together with whatever masculine accessories he can find. If your entire self-image is reliant on more doodads than Batman’s utility belt, it might mean there’s not much at the core.

It’s a popular right-wing fantasy that social media companies are run by nanny-state leftists who cruelly silence conservatives at the merest hint of offense. This has never been true. Most of the people who get booted from multiple platforms are harassers, misinformation peddlers, and outright Nazis. Repeatedly violating terms of service and basic human decency is not a badge of honor. It’s indicative of poor impulse control and a venomous mindset.

Saying Women That Beat You Have Dicks is Very Revealing

In his painfully bad clapback video and associated tweet, Tate said Thunberg had admitted to having a small penis in her original response. So, to recap: the master alpha male responded to being humiliated by immediately trying to frame a woman as a man (yes, women can have penises, but not in Tate’s worldview). He soothed his wounded masculinity by trying to make Thunberg more masculine since it’s less embarrassing to get your ass handed to you by a man. It’s the rhetorical equivalent of denying a strike out by claiming innumerable foul tips, and I remain baffled why anyone this weak makes other men feel strong.

Seriously. I not-did both of those things today and it was super easy. I plan on not doing them again tomorrow.

Tate literally has nothing to contribute if he’s not responding to someone else. He crafts no new thought and has nothing but regurgitated patriarchy to offer his followers. It’s a life entirely defined by how uncomfortable he makes others. This is not a healthy place to be in. It’s a defining characteristic of bad people who no one likes.

Not every MMA fighter or person who makes their living with performative violence is a bad person. Mick Foley consistently proves you can be both a hardcore legend and an embarrassingly good human being. That said, a lot of these dudes end up in trouble for rape, beating up their girlfriends, or both. Fighting doesn’t make you a monster, but a lot of monsters gravitate to fighting. People like Tate aren’t paragons of masculinity. They’re brutes who are good at forcing people to do what they want. You’re not actually supposed to look up to guys like that.
KEEP THE HOUSTON PRESS FREE... Since we started the Houston Press, it has been defined as the free, independent voice of Houston, and we'd like to keep it that way. With local media under siege, it's more important than ever for us to rally support behind funding our local journalism. You can help by participating in our "I Support" program, allowing us to keep offering readers access to our incisive coverage of local news, food and culture with no paywalls.
Make a one-time donation today for as little as $1.