Checking on Race and Community in Amerikin 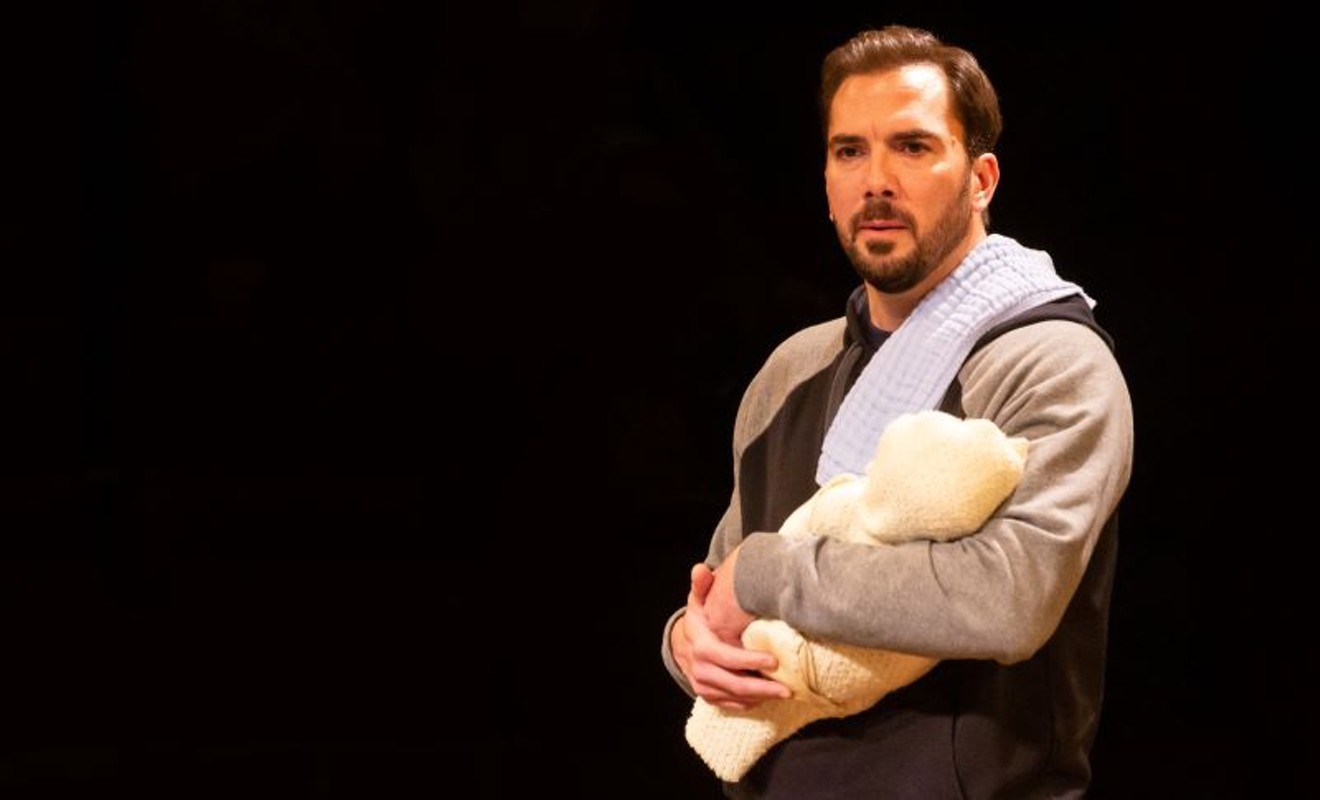 Jeff Browning (David Matranga) is a young father who decides he could use a little help in his new role. Thanks to a friend, his search for support leads him to a white supremacist group — which at first seems an outlandish premise until you consider that for some people, community trumps everything.

"I wrote a play about a guy who doesn't even consider himself racist who is trying to join this white supremacist group because he's had a baby," says playwright Chisa Hutchinson who will see the Alley Theatre present a world premiere of her work  Amerikin this week.

"I think that the appeal of those groups is that it really is a tight knit community. They really help each other out. If somebody loses a job there’s professional networking, there are family events, the moms'  carpooling the communal babysitting. They do good in their community. It's just they don't really care too much for outsiders."

Browning is at the center at the start, she says. "The first act really just focuses on the white guy and his experience of being a new father who's trying to connect to community and making some questionable decisions in the process.

"The second act is this outsider, the black journalist comes in to investigate what’s happened because the white guy as part of his initiation had to take a DNA test to prove his racial purity and got some inconvenient results. And sort of winds up becoming a target of he hatred of the group he was trying to join. So this black journalist comes in to shine a light and winds up learning some things about himself in the process."

She had a tough start in life herself with her mom giving her away when she was three years old. "I grew up really poor. I had to scrap for everything that I have today," she says. "I also know that there were forces helping me out at every turn and I guess in the stories that I tell I really want to honor those people, those people who keep striving themselves or help other people strive to to get out of impossible situations.

A self-described "word nerd," Hutchinson says despite her poor early circumstances she was able to get a scholarship "to a swanky private high school in New Jersey." There, a drama teacher exposed her to all shorts of plays and playwrights including Paula Vogel's How I Learned to Drive (1988 Pulitzer Prize winner) and August Wilson's work (two of which, 1984's Fences and 1987's The Piano Lesson each won the Pulitzer for drama.)

In the case of Amerikin, she began developing the play in 2017. She got the idea for the play after repeatedly driving through Sharpsburg, Maryland (population 784 in 2019) which seems to be mainly known for its Antietam National Battlefield which was the site of a bloody battle in the Civil War. From her drives through and her reading on the place, Hutchinson says she didn't think there were many people like her in the area. She began to second guess herself about her presumptions until she says she found a survey on line to see whether people there said "soda" or "pop" and included in the hundreds of answers were two comments to "kill all blacks."

"That's how I got the idea for the play. Drop this guy into the most human situation I could think of and throw in a little racism."

She  workshopped the play in New York City and at other venues. "It's had a few readings," she says, changing along the way. In 2019 it was further developed in the Alley All New Festival, and was supposed to premierei n the 2019-20 and 2020-21 seasons, but COVID-19 disrupted those plans.

"I really want people with this play in particular, I want to put out there that racism doesn’t always look like the redneck from the backwoods of Mississippi who drops the 'n' word every other sentence," she says. "There’s a spectrum. There are  plenty of behaviors and activities and action sand inactions that are racist or that at least allow to flourish.

"I just want to make it OK for people to examine their own behavior. If we can all acknowledge there are gray areas and if we can forgive ourselves for screwing up every now and then and not being perfect or for maybe prejudging someone when we shouldn't have because I know I've done that, I think we can start to move toward a place where none of this matters anymore. We're all guilty. Everybody screws up when it comes to race relations in this country. "Until we acknowledge that, I don't think we're ever going to get to the point where we can all be human together."

Performances are scheduled for February 15 through March 13 at 7:30 p.m. Tuesdays through Thursdays and Sundays, 8 p.m. Fridays and Saturdays and 2:30 p.m. Saturdays and Sundays.in the Alley's Neuhaus Theatre,  615 Texas Avenue. Proof of vaccination or negative COVID-19 test required. Masks are required. Call 713-220-5700 or visit alleytheatre.org. $28-$57.

From March 14-27, a paid digital version of Amerikin filmed live at the Alley, will be available for viewing. Guests who have purchased an in-person ticket and do not feel comfortable attending in-person may transfer their ticket before the start of their ticketed performance to a digital ticket. Digital tickets are $25 and can be purchased at alleytheatre.org. Limited digital tickets will be available for purchase.
KEEP THE HOUSTON PRESS FREE... Since we started the Houston Press, it has been defined as the free, independent voice of Houston, and we'd like to keep it that way. With local media under siege, it's more important than ever for us to rally support behind funding our local journalism. You can help by participating in our "I Support" program, allowing us to keep offering readers access to our incisive coverage of local news, food and culture with no paywalls.
Make a one-time donation today for as little as $1.