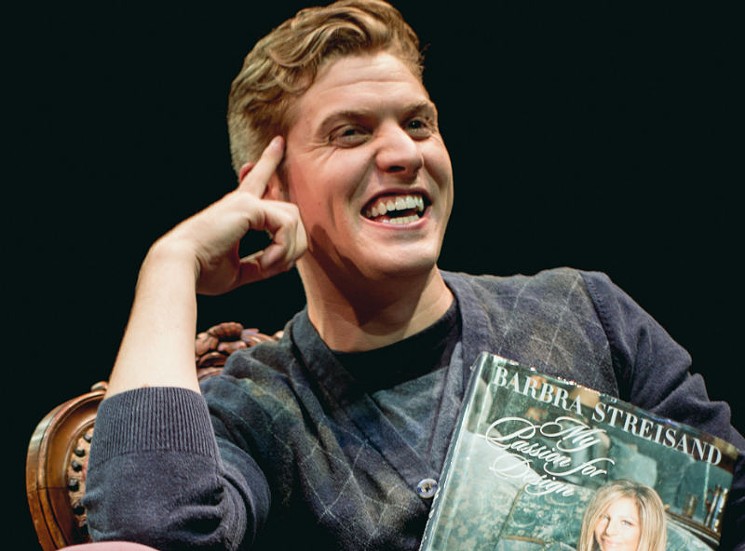 Doug Atkins
Photo by RicOrnelProductions
As soon as he read Jonathan Tolins' Buyer & Cellar, actor Doug Atkins knew he wanted to do this play about a man living in Barbra Streisand's basement, taking care of the dolls, memorabilia and other objects the mega star collected there.

In real life, Streisand really did have a sort of mall in her Malibu basement which the world found out about when she mentioned it in her book My Passion For Design published in 2010. The rest is whimsy prompted by a stray remark at a party Tolins was attending, Atkins says, when one person asked "Wouldn't it be funny if someone worked down there?"

Atkins' character Alex Moore is an out-of-work struggling actor (fired from Disneyland no less) who has accepted the basement detail. "Basically I’m hired to work down there if she was ever to come shopping in the mall." Eventually, of course, she does and they begin talking. During the 90-minute, one-act, Atkins gets to play Alex, Streisand, her husband James Brolin and three other characters.

Although Atkins has done this play before in Fort Worth, he says this production is completely new. He credits director Brandon Weinbrenner with giving him new insights and perspectives on the show. That and he's a couple years older than the last time he did it and he thinks that helps him understand it better.

Growing up in Allentown, Pennsylvania, Atkins says he was interested in theater from an early age and had to make the decision as an eighth grader to go on to a performing arts high school in Bethlehem, PA. Now based in Houston, he says the more he studied, the more he fell in love with theater. An added bonus is that in doing a play like this, "I get to do these kinds of things that affect social change; I couldn't be more happy and proud."

Performances are scheduled for July 14 through August 12 at 7:30 p.m. Thursdays, Fridays and Saturdays; and 3 p.m. Sundays at Main Street Theater - Rice Village, 2540 Times Boulevard. For information, call 713-524-6706 or visit mainstreettheater.com. $39-$42. At the July 14 performance a special fund-raiser will start at 7 p.m. and tickets to that performance are $50-$75.
KEEP THE HOUSTON PRESS FREE... Since we started the Houston Press, it has been defined as the free, independent voice of Houston, and we'd like to keep it that way. With local media under siege, it's more important than ever for us to rally support behind funding our local journalism. You can help by participating in our "I Support" program, allowing us to keep offering readers access to our incisive coverage of local news, food and culture with no paywalls.
Make a one-time donation today for as little as $1.