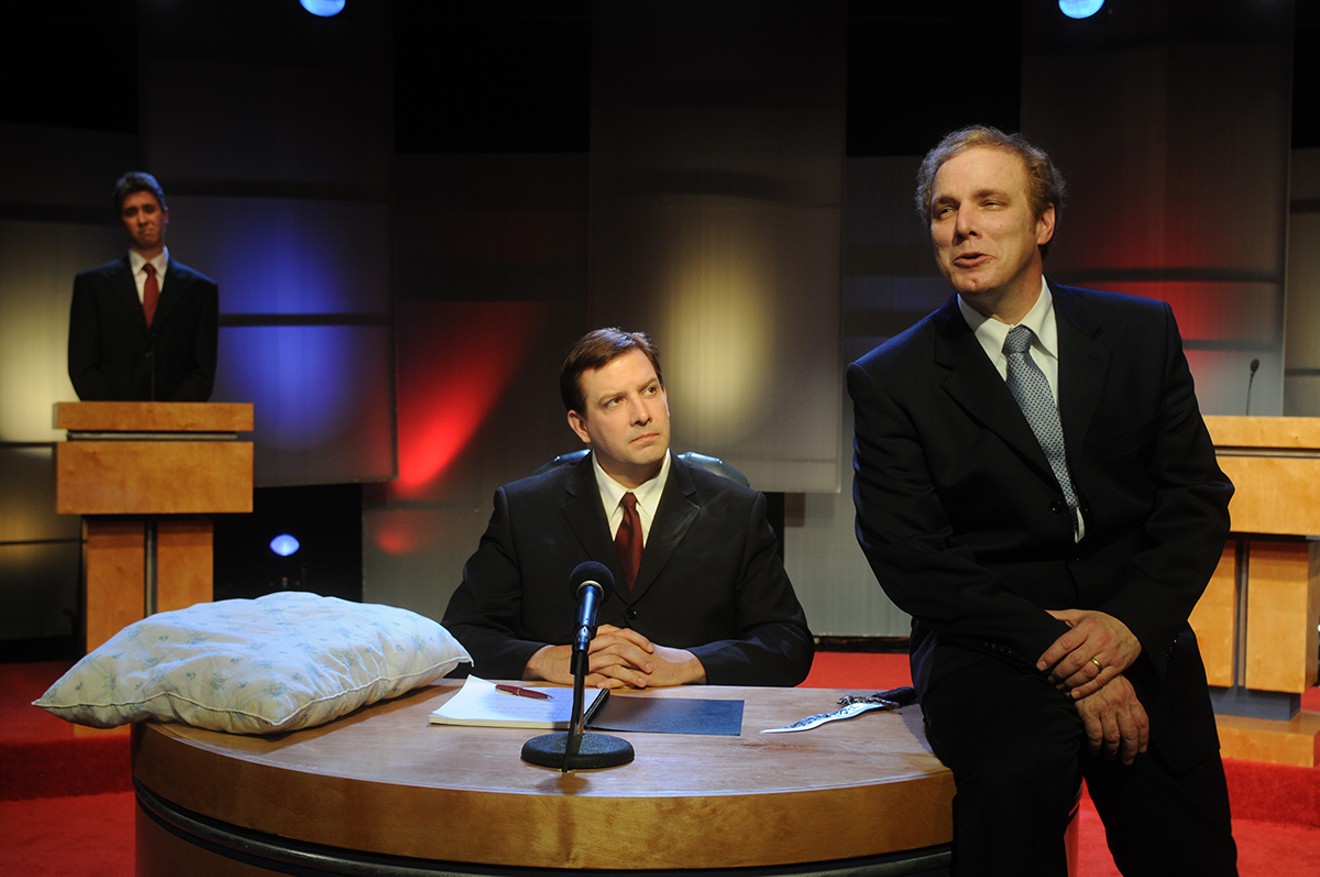 The Catastrophic Theatre produced The Strangerer in 2008. Now Seán Patrick Judge, Paul Locklear and Troy Schulze are reprising their roles, this time in repertory with Mickle Maher's sequel, Jim Lehrer and The Theater and Its Double and Jim Lehrer’s Double. Photo by George Hixson
The Strangerer, Mickle Maher's riff on that famous George W. Bush-John Kerry debate, doesn't dabble in conspiracy theories about whether or not that bulge in Bush's coat was hiding a radio receiver.

The play actually gets much weirder than that. Before it's all over Bush tries to murder the moderator, PBS newsman Jim Lehrer, but it all makes perfect sense in a surreal sort of way. Loosely based on author-philosopher Albert Camus' novel The Stranger, the script plays off Lehrer's uncanny ability to focus solely on the facts while seemingly keeping his own personal observations to himself.

It's an inside joke that worked well in 2008 when The Catastrophic Theatre introduced the playwright to Houston audiences. Ten years later the same three actors — Seán Patrick Judge, Paul Locklear and Troy Schulze — are reprising their roles as Lehrer, Bush and Kerry. Artistic Director Jason Nodler directed the production in 2008 and, this time around, it's being directed by Charlie Scott who earned our accolades in 2005 for his direction in Infernal Bridegroom Productions' Medea.

"As far as the production ten years ago, we want to be faithful to it. It was a successful production, they got it absolutely right and we don’t want to mess with that," says Scott. "At the same time we’re all ten years older and that makes a significant difference in how we approach things and we’re also approaching things in a different way in terms of the political landscape of the country."

"At a certain point it really sort of focuses in very intensely on Bush as a kind of existential enigma both to the audience and to himself. The play really is about this kind of bizarre angst that wells up inside of him," says Scott. "It definitely presents George W. as the much more frightening person than the superficial, goofy, good old boy that we saw in public. He’s definitely scarier. Definitely much more — if you will — fucked up, but he’s also kind of pathetic."

In spite of the dark subject matter, the play is definitely a comedy and Scott says he has to work hard to keep from laughing during rehearsals. "There are parts of it that are like a Saturday Night Live satire sketch and we have three actors who are just able to impersonate the three characters to a T," says Scott. "It’s absurdism, for sure, but it’s absurdism that’s very much akin to comic sketches."

The Strangerer is being presented in repertory with a "sort of" sequel, also by Maher and also using Lehrer as the central character. Scott serves as assistant director and flips roles with Greg Dean, who is directing Jim Lehrer and The Theater and Its Double and Jim Lehrer’s Double.

The premise is that the retired Jim Lehrer (Seán Patrick Judge) coexists with his future burgeoning playwright self (John Dunn) against a Gothic horror-comedy backdrop that borrows from Edgar Allan Poe.

"Basically the two of them exist simultaneously and share a house together. I love it. I love it," says Dean. "Very little is made of it; it’s just treated as a given. Although one of the Jims temporarily forgets that another Jim lives with him."

They've all been burning the midnight oil watching old footage of Lehrer to get his affectations down pat. "One of the best is one where Mitt Romney kept interrupting him, and refusing to observe the time limits, and how flustered Jim Lehrer became," says Dean. "It's his involuntary physical reaction that is so funny."

Both plays are less about Lehrer himself and more about how he is perceived by the general public. "He’s maybe too reasonable, too fair, an even-tempered guy who’s devoted to just presenting the facts and not sharing one’s own conclusions with viewers or listeners or readers," says Dean.

"This character is kind of myopic: He has his tasks, his agenda, his routines and he focuses on them so rigoriously that he’s unaware of the larger danger," says Dean. "That becomes really poignant in the second play because Jim is in retirement so there’s very little left to report on.

"I really, really love this play. It’s very funny. Like all of Mickle’s plays, I think, 'Oh there’s no way that can work.' Then I read and and I see it and he always [pulls it off]," says Dean.

Both productions have Tamarie Cooper on costume design, Hudson Davis on lighting design and Shawn St. John on sound design.