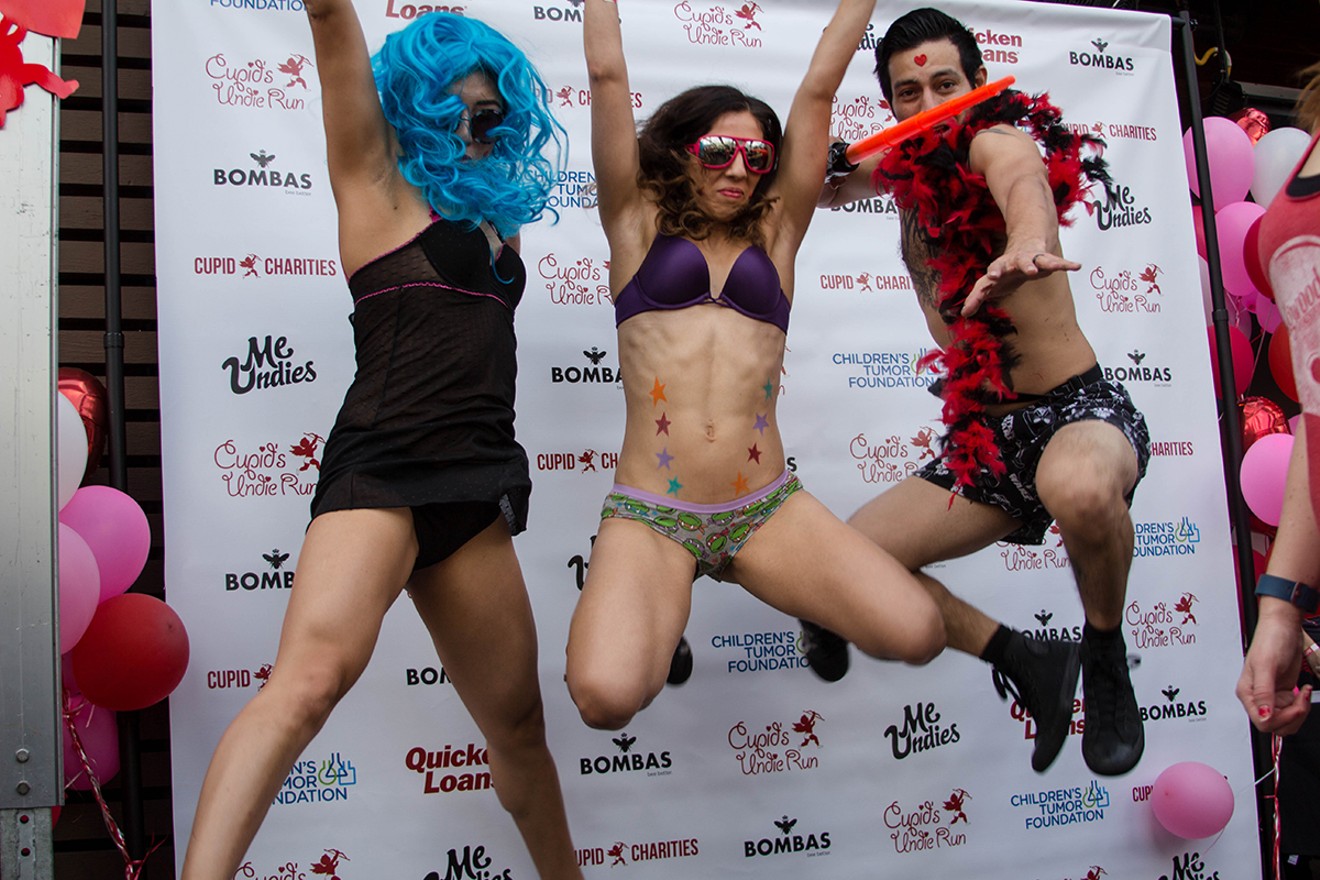 Houstonians are dropping trou this Saturday for Cupid's Undie Run, a mile(ish) fun run that helps raise money to find a cure for neurofibromatosis. Photo by Chris Pivonka
We're not exactly sure what the weather's going to look like this weekend, but there's a 100 percent chance of distracted driving when Houstonians drop trou for Cupid's Undie Run. And if the thought of stripping down to your tighty whities or bra and panties makes you a little bit uncomfortable, well that's kinda sorta the idea for this mile(ish) fun run for a cause.

"People who have neurofibromatosis, they’re very uncomfortable a lot of times, from my own personal experience," says race director Krista Fredrick, about this fundraiser to help find a cure for the rare genetic disorder. Fredrick was diagnosed when she was just six months old; NF affects one in every 3,000 people and there's currently no cure. "There are some days it’s very emotionally and physically draining. I’ve tried to have a positive outlook on it. For those who deal with this on a day-to-day basis, they are uncomfortable and we wanted other people to just run a mile in their underwear for ten minutes to just be a little bit uncomfortable too.

But no worries; we can't all look like Marky Mark in his Calvin Klein boxer briefs and nobody's going to be grabbing their junk. This is a fun run wrapped inside a party and creativity is in play with team names (Team Tighty Aphrodite, TX Underwear Traders, and No Shame is Our Game), as well as with the attire.

Underwear is optional, but creative outerwear isn't. Don your pajamas, jammie jams, onesies or Halloween costumes.
Photo by Chris Pivonka
Some extroverted racers wear pajamas, robes, jammie jams, cartoonish striped onesies, group T-shirts or even Halloween costumes. Anything goes, and the inhibitions melt away fairly quickly at the pre-party at Fuego's Saloon. There's an entrance fee to participate in the undie run, but then those who are able to also raise money qualify for swag (like the signature Cupid's undies that say "I take my pants off for charity") or even free drinks for those who raise $250.

It's a nationwide, 30-city initiative that began eight years ago with a group of people who wanted to do something, anything, to help the younger brother of one of the founders. Chad Leathers' brother wasn't diagnosed until he was 16, but as the tumors grew inside his body, they began to encroach on his spine and he was soon paralyzed.

Forget 13.1 or 26.2 race stickers; purchase this 1-ish mile sticker for just $5.
Screenshot of 1-ish Mile Sticker available online from Cupid's Charity Store
"When the event started in 2010, the organizers, it was kind of a random thought they had. One of the organizers, his younger brother had NF, he had been bedridden for eight months; such bad pain," says Fredrick.

She says their idea was, "Well, people could run like a mile in their underwear," and they were surprised when 600 people came out for that first run in Washington, D.C.

"Cupid’s Charity started a new effort called Project: Cupid to inspire do-it-yourself fundraisers. I think it’s a new trend with the goat yoga, the yoga classes with the goat fundraiser, a Ron Burgundy brunch; they get creative," says Fredrick. Project: Cupid sees folks fundraise on their own schedule by organizing a bathrobe brunch, trivia night or even a birthday party with donations instead of gifts. It seems to be working, too, as Cupid's Charity already has raised more than $14.5 million dollars to help #endNF.

"I want to do whatever I can to find a cure. This has been such a great outlet. I’ve met so many people, between people affected, the volunteers, the people who don’t even know what neurofibromatosis is," says Fredrick. For those who have the genetic disorder, tumors form in the nervous system — on the brain, spinal cord, skin or nerves — and can lead to hearing or vision loss, bone deformities, chronic pain or, like the founder's brother, paralysis.

"It’s been amazing to see all the progress that’s been made in the past eight years," says Fredrick. She said that in 2010 there were barely ten trials but, through the efforts of Cupid's Undie Run and other organized efforts, now there are more than 75 clinical trials. "I feel like we might cure within five years."

The pre-party kicks off at noon, the race starts at 2 p.m., and then there's more partying with Cupid's Undie Run.
Photo by Chris Pivonka
The shebang kicks off at noon, where they'll hand out swag for those who've met some of the fundraising benchmarks, chug down some liquid courage, then walk/run/jog the mile(ish) and then continue with an after-party with DJ and dancing. It's happening, rain or shine, and the organizers are standing by with parkas just in case the clouds open up.