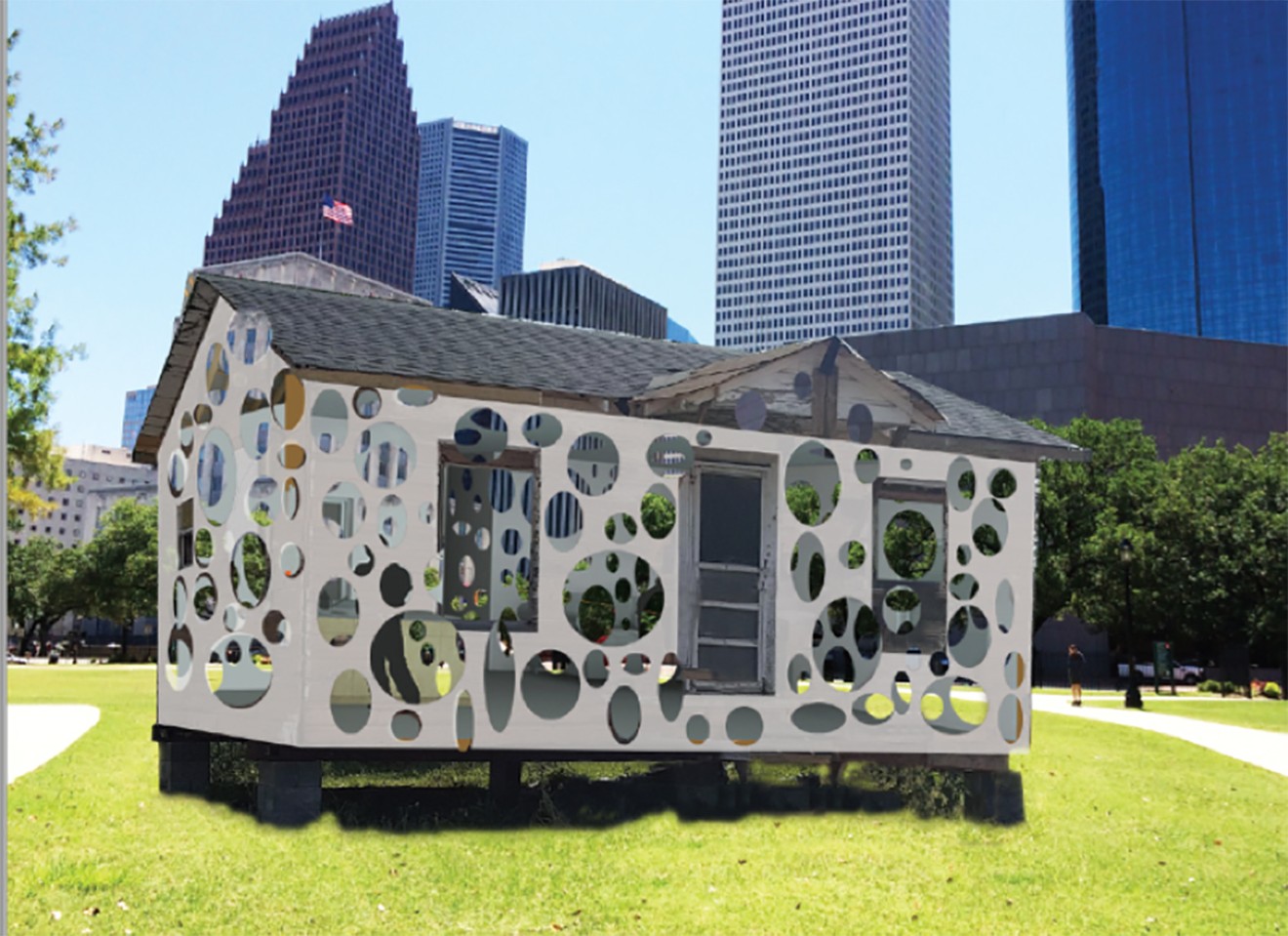 The above rendering gives an idea of what-comes-next, though there's a whole lot going on with this project. This month they're starting work on Open House, where they take an empty house that's been moved to Sam Houston Park, line the walls with historic photos, and then chainsaw the structure into Swiss cheese.

All great quests have a beginning and this one starts at the Houston Public Library's historic Julia Ideson Building where they'll hunt for iconic images from Houston's history.

"We’re just getting that started now but we’ll be using the Ideson collection and also working with The Heritage Society and also using their collection," says Ruck. "Whatever resources we can find. We're trying to reach the full spectrum of the Houston community; we’ll reach in different directions."

Their search should yield some fascinating results. Photography was invented right around the same time that Houston was born, back in 1832 when real estate promoters John Kirby Allen and Augustus Chapman Allen snapped up that tract of land at White Oak Bayou and Buffalo Bayou (now known as Allen's Landing). The Ideson collection dates back to the 1860s and includes photographs of early Houston leaders like Jesse H. Jones, Howard Hughes, Colonel House, Alfred C. Finn, Mr. and Mrs. Hobby and Rev. Jack Yates.

Sam Houston Park itself is a living, breathing piece of history, serving as home to The Heritage Society with its ten historic buildings ranging from an 1823 cabin to a mansion built in 1905. Which will make for a very meta art project when they go mining through the society's archives.

"We’re going to be using the photographs and source material to create a large digital layout for the intrior of the house. The actual photographs won’t be used — they’ll be digitized and laid out in a way that we can primarily wallpaper the interior of the house with these photographs," says Havel.

"They’ll be printed onto a vinyl material which should hold up pretty well to the interior," adds Ruck.

The project was commissioned by the Downtown District (the folks who have energized downtown's Main Street Square with its "Art Blocks" initiative) and The Heritage Society, and the 16-foot by 24-foot home was purchased from the demolition division of Cherry, a local recycling and demolition company.

There's no telling what they'll find when they start cutting into those walls, but that's part of the fun. Not only will the cut-outs be placed at varying heights — perfect for the arms, legs and heads of everybody from pint-sized to basketball-worthy — but they'll also frame important vignettes surrounding the house.

"Despite the fact that our work is always a social experiment, we like to see how people react," says Havel. "One of the joys that Dean and I get out of that is seeing the piece get animated by viewers' particpation.

"The one thing that I’m still gong to explore is visual relationships to the site. Creating portals to views of the skyline, views of the rest of the park; those will be overlaid by the historic photographs. We’ll be seeing the past and the present at the same time.

"As an artist I’m looking forward to creating those portals," adds Havel.

And so are we. A videographer has been shadowing the pair and already has documented the house's move to the site. Visitors will be able to watch their progress over the next couple of months, although the house will remain fenced off until it opens in June.

Most work will take place on weekends as both artists have to answer to the man: Ruck works at the University of Houston and Havel is a teacher at St. John's School. But viewers can still visit The Heritage Society during the week, check out their new partnership with 2015 MasterMind Award-winner Houston Arts and Media, and make Houston's history part of their own story.