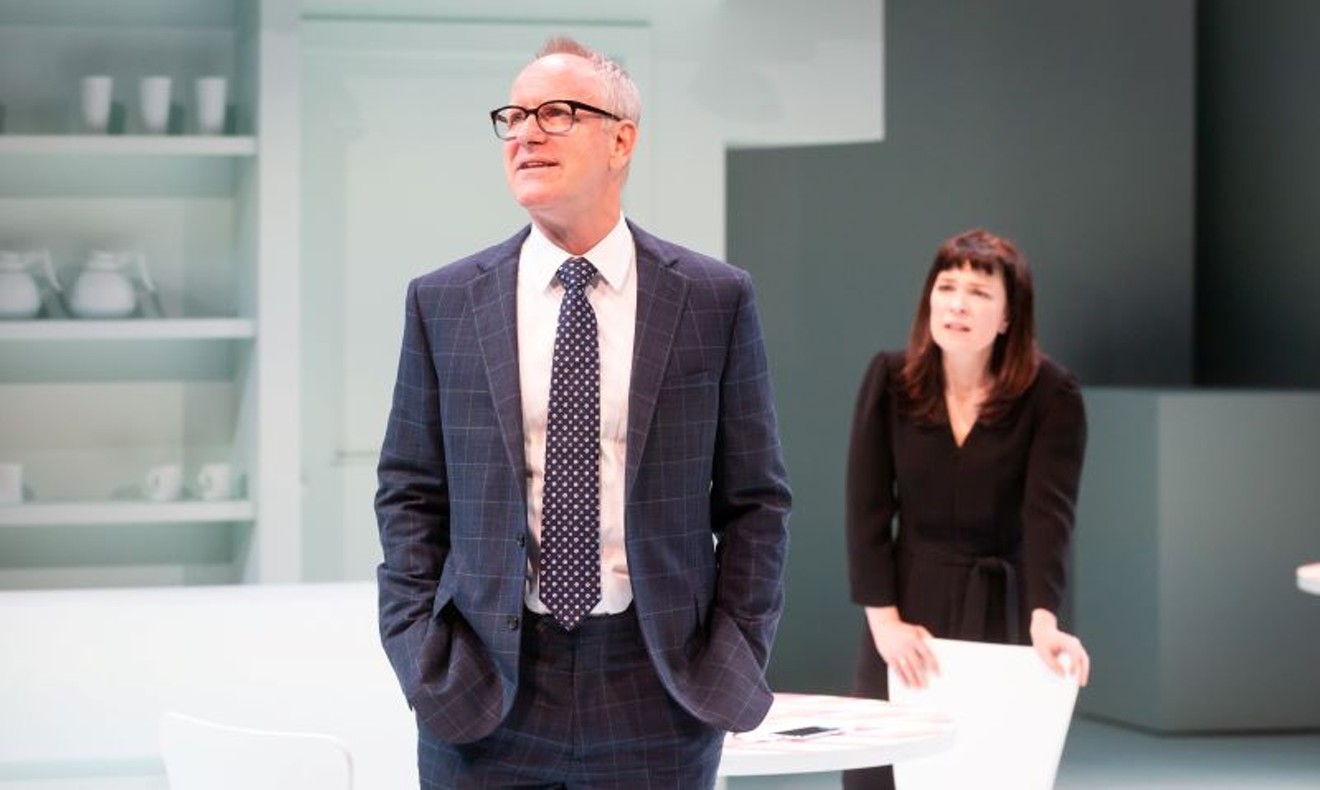 Chris Hutchison as Gordon and Elizabeth Bunch as Jean in Alley Theatre’s production of Dead Man’s Cell Phone. Photo by Lynn Lane
For a dead man, actor Chris Hutchison gets a lot of time on stage. In the Alley Theatre's production of playwright Sarah Ruhl's Dead Man's Cell Phone, he plays Gordon, who's passed on to his great reward. But still very much a part of the story in what Hutchison calls "a whimsical. dark comedy."

The play begins, appropriately enough, with a cell phone that won't stop ringing in a quiet cafe. And a woman who decides she has to answer it. As the play develops, it becomes clear that Gordon is more than what he seems to be at first glance. "He leads on the surface a conventional life but when we find out what he actually does for a living, it’s pretty dark," Hutchison says. "There's a lot of danger involved in it and it implies that he is dangerous also.

“Your first view of him is as a dead person and I don’t think you have an expectation when you’re coming to see the play that you’re then going to get to know him pretty well in a variety of ways throughout the play," Hutchison says. "He is sort of delightfully surprising and the character itself he’s got a sort of dark secret that’s fun to mess with.”

Hutchison calls Ruhl “a very unique voice in contemporary play writing because all of her plays are very poetic" in how they address bigger concepts and the manner in which they are written.  “I think this play is unlike a lot of plays I’ve worked on,” he says. “It’s really beautiful; the tone of it is incredibly unique. It’s goofy and it’s good-hearted but it's also about real emotions and depth of feeling and I think it might be a lovely play for this moment for people to come and meditate on and ponder as it's happening.

The set for this play has been in storage for two years thanks to the pandemic and the actors only recently got a look at it. At the time of the shutdown, the Alley had just opened 1984 and the actors for Dead Man’s Cell Phone were still a two or three weeks away from beginning rehearsals..

With a cast almost exactly the same as what was planned two years ago and the same set of designs and costumes, Hutchison says the real set of changes for the production "is that we're all very different than we were two years ago. We've all been through a tremendous amount and have survived and come out the other side different people.

"Whatever I'm bringing to this character is different than it would have been two years. In our business experience, knowledge and life informs your work very much."

A digital version of Dead Man's Cell Phone will be available May 9-22. $20.
KEEP THE HOUSTON PRESS FREE... Since we started the Houston Press, it has been defined as the free, independent voice of Houston, and we'd like to keep it that way. With local media under siege, it's more important than ever for us to rally support behind funding our local journalism. You can help by participating in our "I Support" program, allowing us to keep offering readers access to our incisive coverage of local news, food and culture with no paywalls.
Make a one-time donation today for as little as $1.