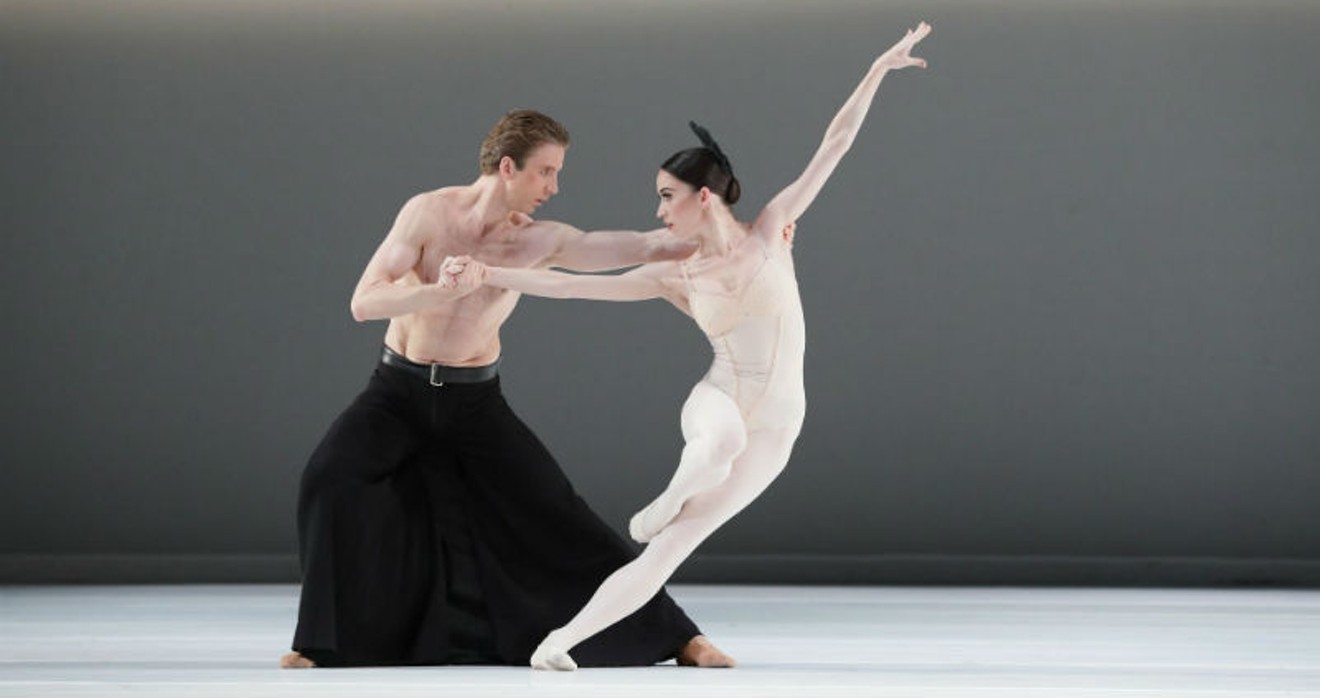 Madeline Skelly and Linnar Looris seen here in the Houston Ballet production of Grosse Fuge Photo by Amitava Sarkar
For the first time in more than ten years, former Artistic Director Ben Stevenson's choreography for Don Quixote will be performed by the Houston Ballet. The short run offers only four chances to see the ballet which will be staged at one of the ballet's regular homes away from home: the Hobby Center.

First soloist Linnar Looris is one of the men dancing the title role and has the task of portraying a man who lives mostly in his own head with dreams and visions of things that actually aren't there. He has decided to be a knight and embark on a chivalrous journey. "He's trying to set right all the wrongs in the world," Looris says. Part of his quest entails looking for what he believes is his dream woman Dulcinea. All the while, the old nobleman is carefully cared for by loyal retainer Sancho Panza (Christopher Gray).

In the opening scene the Don is shown in his living quarters with Sancho Panza. "Sancho is trying to bring him into normal day-to-day activities," Looris says. "He sees his own shadow and thinks it's a big ghost. He pulls his sword It sets the tone right from the beginning."

"I'm really old in this performance," Looris said and has been growing out his beard in the hopes that it will work for the production. If not, he'll have to shave it off and go with a fake beard as well as they white wig he'll wear. "I wear a bald cap and then a wig on top of it. I've played older characters but this would be the oldest." He's been practicing how he walks as well, he says.

Looris grew up in Estonia. When he was young, his parents took him on a two-and-a-half hour trip, telling him just before he got there that he would be auditioning to be part of a ballet school. He hadn't expressed any interest in ballet but his parents thought it might be a good thing for him to do, he says. Fortunately, he really liked it. "It was a Soviet time when I grew up and whenever anything bad happened they played Swan Lake on TV."

In part what drew him was that it was very disciplined and gave him a framework in which to work. "It was something completely new for me. That was a big bonus." He lived in the capital where the school was, living with a succession of family friends. When he was 13 or 14 he got his own studio apartment. He credits the support of his parents for his success saying that although they brought up ballet, they also told him if he didn't like it, he could leave. "We're not going to make you do this," he says they told him.

From there he went to Birmingham Royal Ballet in England and later to Houston, whose program he heard of through a ballet friend.

He says one of the effects of Hurricane Harvey which he refers to a "that terrible thing" is that the Houston Ballet personnel have been brought even closer together, as they've had to perform at other venues while their home at the Wortham Center is still being prepared.

Don Quixote is a full-length, three-act ballet that goes very quickly, Looris says. "It's so fun and it's such an easy treat for the audience. You don't have to be a serious ballet appreciator. It's a full-on family story. There's good humor, a good story, good emotion. There would be very few moments when you could fall asleep. It's not boring."