Say what? Playwright Will Power had to do a double-take when he first saw the photograph of heavyweight boxing champ Muhammad Ali with Stepin Fetchit, a 1930s Hollywood actor who parlayed a dim-witted, lazy, jive-talking character all the way to the bank. It just didn't seem to make sense.

"Ali is strong; Stepin Fetchit is weak in public. Ali would stand up to the power structure, Stepin Fetchit wouldn't. Almost like direct opposites," says Power, who fell down a rabbit hole trying to get to the bottom of this odd pairing. "It's like something that you’ve been told and all of a sudden you see a picture; it’s like seeing Jesus and the devil."

He thought to himself, "Wait a minute, there’s something deeper here than I’ve been told. Who are these people?" His research — which included interviews with preeminent Ali experts Tom Wolfe and David Ramsey, as well as a host of Princeton scholars — eventually led to the scripting of his creatively titled 2015 play, Fetch Clay, Make Man, about to make its regional premiere at Houston's The Ensemble Theatre.

Power is quick to point out that not everything Ali said in public has turned out to be true. "Ali says he threw his gold medal in the river when he wasn’t able to eat at a restaurant; later he said he lost it." But what is definitely true is that both men knew how to manipulate their image for the media.

"Muhammad Ali might have been messing around," says Power, about Ali's claim that Fetchit shared Johnson's secrets. "[They] were tricksters. I take the perspective, just like in King Lear, the fool was very wise. A lot of older people have wisdom. Now whether that really happened or not, we don’t know, but they never changed the story." 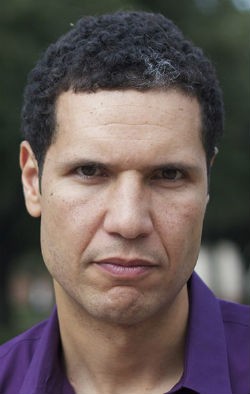 Will Power wrote the play, Fetch Clay, Make Man, now making its regional premiere at The Ensemble Theatre, January 25-February 25.
Photo courtesy of The Ensemble Theatre
As for their unlikely friendship, Power suggests that those in the public eye are not necessarily presenting their authentic selves. "What I’m really exploring is the complexity of the true whole contradictory person. Everyone has a public persona, no matter what their ethnicity, and then they have a private thing that is more complex than anyone could imagine.

"In African-American culture, we say what we have to say to the white society and then there's who we are. Women have to do that sometimes. 'Who am I, what can I say?,' though that’s changing," says Power. "But a lot of times in traditional history if you want to protest, you have to protest in a subtle way."

Power says he originally thought it was going to be a two-actor play but, as he started to explore the story, he found that several other characters wanted to speak. Or, as the second half of the script plays out, argue.

"It’s like five characters and basically four kings and a queen, you dig. How problematic can that be on a chess board?," asks Power. "Every character was the best in their field. Sonji Clay [Ali's first wife] was the best she was in Chicago, Muhammad Ali was the champion, Stepin Fetchit was the best actor. Not only did [Hollywood studio chief William Fox] own Fox Theaters, he was in real estate; he was the biggest."

The fifth role, Brother Rashid, is a composite character. "He’s the best bodyguard. When the Nation of Islam wants to protect someone, they send Brother Rashid," says Power. "A chess board with no pawns, no bishops, no rooks, no [knights]. Just four kings and a queen just going at it." Mirron Willis (who acted in The Merchant of Venice and Macbeth during 2015's Houston Shakespeare Festival) directs this production for Ensemble.

Power, who has penned nearly a dozen plays, also drew on his background in music in writing Fetch Clay, Make Man, which he describes as a drama with irony and comedic moments. "I’m not old but I’m not young. A couple of [my scripts] were solo plays, some ensemble, some hip-hop theater. I explore different forms.

"Before that I did a lot of music, jazz groups, hip-hop groups. Even though I'm writing plays I still add a sense of rhythm," says Power. "It’s a play; it’s not a musical. I’m really into the rhythms of the dialogue. I pull from my music and theatrical backgrounds; a call and response.

During Power's visit to Houston he's also slated to present a workshop titled, "The Origin of Hip-Hop with Will Power," where he'll discuss the origin and evolution of hip-hop. The workshop is scheduled for January 26, from 6 to 8 p.m., The Ensemble Theatre, 3535 Main, 713-520-0055, ensemblehouston.com, free.