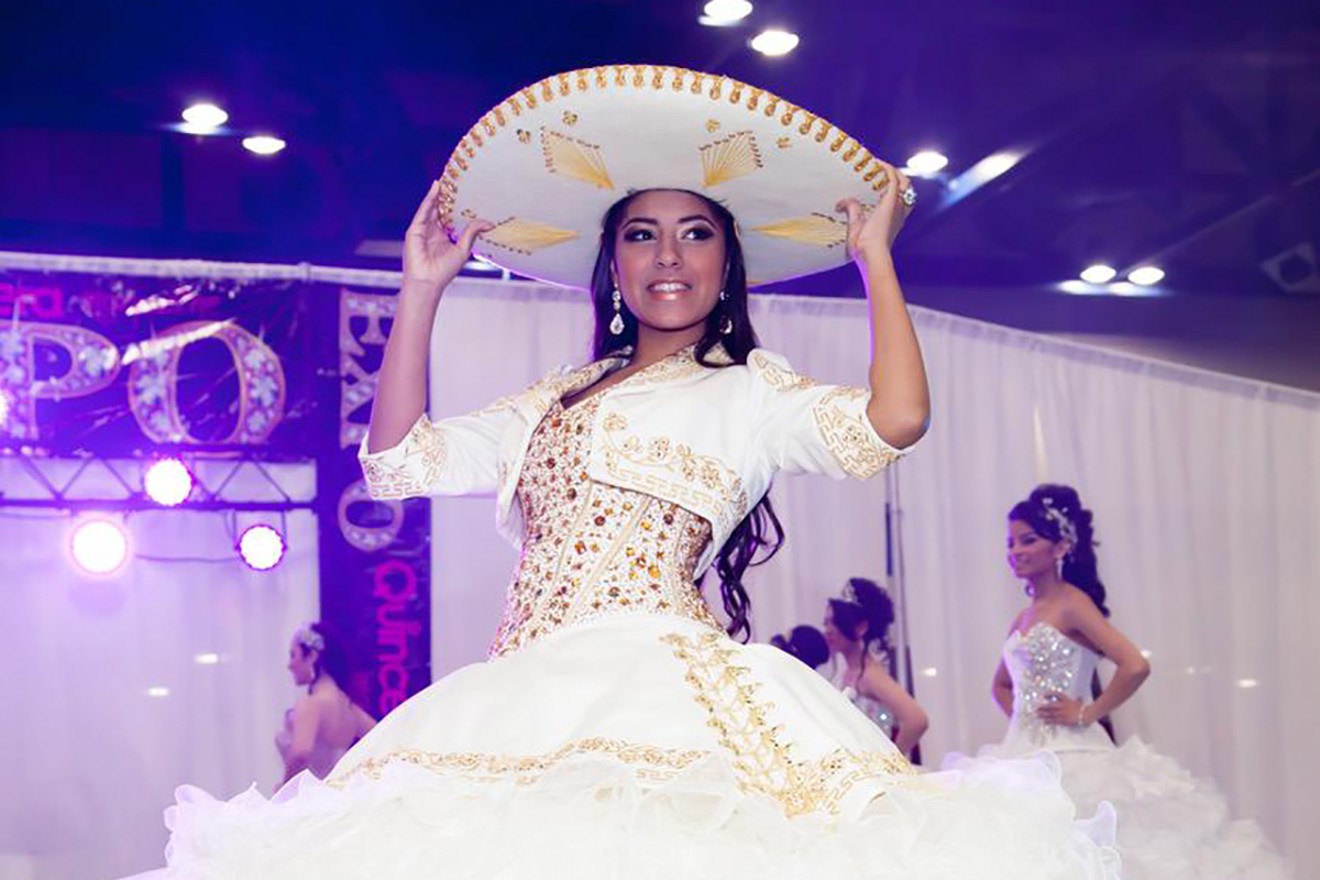 A quinceañera is the biggest day in a young woman's life and planning typically begins when she turns 13. Photo courtesy of Houston Quinceañera Expo
Planning and pulling off the perfect quinceañera is a huge gamble, full of peril and pitfalls. Get the right dress, cake, band, venue and photographer and you'll be the envy of all, but one wrong move and you could end up a meme gone viral and social media's latest whipping girl.

Bad quickly turned into worse when Rubi Ibarra Garcia’s father posted an invitation on Facebook, intending to invite just the locals from Villa de Guadalupe in northern Mexico. Except Daddy made the invite public and soon more than a million folks had RSVPd "si," they would be attending Rubi's 15th birthday bash.

Rubi and her family quickly became an Internet sensation, launching all sorts of memes (fake Ticketmaster tix to XV Ruby Fest, pics of massive crowds and even President Donald Trump peeking over a border wall asking if he could attend).


Maybe they were interested in the amateur horse race that was part of the entertainment, with a prize of 10,000 pesos (about $536 U.S. dollars) to the winner. Whatever the draw, it's estimated that between 20,000 and 30,000 folks showed up to Rubi's party, crippling the town with a population of about 140 residents.

The media were all over Rubi and her mother and, in spite of efforts to prevent disaster (they had the Red Cross and ambulances lined up), tragedy struck when one of the race horse owners was killed when he stepped in front of a competing horse.

So, rule No. 1 for planning a quinceañera is to not post the invitation publicly on social media. Even better, consider hiring a local stationer to print up some invites and send them through the mail, old school.

But there are so many other ways a teen's big day can go wrong and Jose Medrano, publisher of Quinceañera Magazine and director/owner of Quinceañera Expo, says there's no shortage of fly-by-night operators ready to take your money and run.

Get the 411 on the perfect attire for maids and chamberlains at the Houston Quinceañera Expo.
Photo courtesy of Houston Quinceañera Expo
Medrano has witnessed all sorts of horror stories over the years. "[Some organizers claim to] do the whole package for just $5,000. It’s impossible to get a super deal like that. These kind of people they make money fast and they go fast," says Medrano. "That’s why I always say to everybody, 'Don’t go for the best price, try to investigate everybody.'

"The worst I see, the day of the quinceañera, they get to the ballroom and there’s another wedding or quinceañera," says Medrano. "You always have to know all of the people working with you. Even if you go with one person to get everything, ask that person to let you meet everybody: the photographer, the DJ, you have to ask questions. It’s a big party, and even $5,000 or $1,000 is too much to lose."

He says he's also seen an increase in bait and switch type scams. "They make big deals, they promise a lot of stuff and they don’t deliver everything or when they deliver they deliver cheap stuff. They promise really good food and they deliver, I don’t know, not even a buffet, something really disgusting," says Medrano. He's also seen subpar decorations sent out, never washed and filthy or just cheaply constructed.

Lighter colored fabrics are trending now, but big skirts are always in.
Photo courtesy of Houston Quinceañera Expo
At the upcoming Houston Quinceañera Expo, set for February 25, Medrano's advice is to use the event as a guide to get ideas. But be wary of anybody who walks up and hands you a business card. Just like TSA's no fly list, there's a subset of shady characters who are banned from these expos, but they're sneaky and sometimes make it past security. "They are good at hiding. You can’t catch them. You can’t find them on the internet. The phone is always busy. It’s hard to find those people." He says once they have your money, good luck getting them to ever answer the phone again.

Planning a quinceañera is like planning a wedding, and most teens start dreaming when they turn 13. "The investment is between $10,000, $20,000, $30,000, I also have some quinceañeras, they spend good money like $100,000," says Medrano. "One of the vendors said that in Denver, Colorado, there is one quinceañera, she spent five million dollars." Of course not everybody wants or needs to throw a concert for 5,000 guests, and a party can be just as successful held on the back patio of a home.

Medrano says these events aren't just for Latina teens anymore; he says he sees a lot of African-American, Chinese and other cultures celebrating the 15th birthday of a young woman.

So what's hot this year? "Every year it changes. Right now I see a lot of flowers and also in Mexico, some of them, they are using [denim] to do dresses now. It’s a new trend they are doing there in Mexico."

These transformer dresses take a young woman from the formality of church to the party-party-party afterwards.
Photo courtesy of Houston Quinceañera Expo
Also new are transformer dresses that take the birthday girl from the church mass to the reception to the dance. "They can use it for the church, go outside then they can take off the shawl, at the dance they can take off the big skirt for a little skirt. Now it’s like a three or four pieces," says Medrano.

No matter the budget, the one "must have" for any quinceañera is the dress. This year's expo has fashion shows set for 1 and 2:45 p.m., between 50 and 100 vendors, and a chance to win some serious swag (one prize per family).