A Soupçon of Houston's Fringe to Tide Us Over Until Fall

Houston Fringe Festival veteran jhon r. stronks channels his Miss Understood persona with a medley that combines song, dance, drag and a gender-blending performance during the second night of Best of Fringe 2018. Photo by Pin Lim
Like a small boat drifting precariously upon a vast ocean, the resilient Houston Fringe Festival persevered last September, but not without taking on some water.

The timing couldn't have been worse. Houston traffic was a nightmare with many roads still impassible, arts organizations and venues were only just beginning to assess the damage from flooding, and big name national and international artists were backing out of the festival.

"We lost about 70 percent of the participating artists last September. We went on with a total of seven unique shows. It was a small festival. It was a short week but the show went on," says festival Executive/Artistic Director Adam Castañeda. "We didn’t bring in the big touring shows but the festival still happened and part of the reason we’re doing Best of Fringe 2018 is so we can get an early start in attracting those national submissions for the upcoming [2018 Houston Fringe Festival] in September."

It's scary to think that the Bayou City almost lost perennial favorite Houston Fringe Festival but, thanks to more than a few angels, the show will definitely go on.

"I received — I was very fortunate — a grant from the Harvey Arts Recovery Fund. The application was hosted on the Fresh Arts website and the money came from the Harvey Arts Recovery Fund. We were awarded a grant so basically we were able to absorb the loss," says Castañeda. "Honestly, if we hadn't gotten that grant we wouldn’t be preparing for a festival in September this year. Thank goodness for that.

"So, thankfully, the Fringe will live on because of it."

Just as ripples expand across the water, the HARF bailout accomplished much more than allowing the Houston Fringe Festival to continue into its next decade. For many performers, the alt-meets-art fest offers a rare opportunity to get on stage and in front of audience members.

We'll see festival veterans jhon r. stronks and Cirque La Vie during Best of Fringe 2018, as well as a few groups who are dipping their toes into the water to see if the festival format (ten- to 15-minute snippets) is right for them. 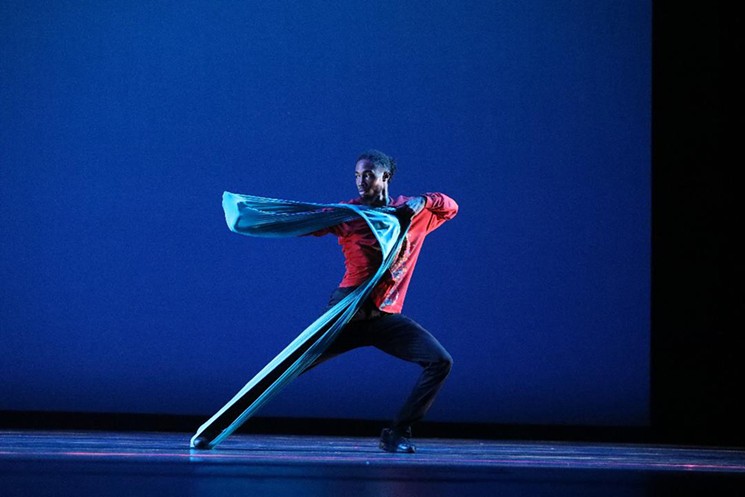 Local hip-hop troupe FLY Dance Company, led by Artistic Director and Choreographer Kathy Musick Wood, takes the stage May 17 in Best of Fringe 2018.
Photo courtesy of FLY Dance Company
"Some people that I really admire said 'yes' and were eager to jump in: Fly Dance Company and Kathy Wood, who is the mom of Jennifer Wood who I’ve danced with; Psophonia Dance Company, one of the first dance companies in Houston that I really enjoyed watching; Sophia Torres," says Castañeda. "The rest of the artists were people who I trusted and are doing really good work."

Both nights are different, so the only way to see all of the theater, dance, music, circus arts and theatrical comedy is to attend back-to-back shows of Best of Fringe 2018.

Best of Fringe 2018 continues on May 18 with a new dance work by Adam Castañeda titled "Leaves of Gold (excerpt)."
Photo by Pin Lim
"I will not be dancing but I am excited to be presenting a piece. I don’t get to go in the studo that often to create my own stuff but I’m really glad that I can show my own work," says Castañeda. "I am excited that I was also the recipient of a production grant from Dance Source Houston to create my own costumes. I've been busy cutting fabric, sewing, and I’ll be able to watch from the sidelines."

Castañeda says the piece is inspired by a book of prayers and prose from the 1940s, and the costumes reflect the themes of geometry in nature and its intrinsic beauty. "The costumes will be built from green metallic patterns to give the impression of leaves on the stage blowing through the wind," says Castañeda. "Not literal costumes, very much based on the thematic content of the book."

"One of the main reasons to go to Best of Fringe is we’ll be announcing a partial line-up of the full festival," says Castaneda. "That’s cool."