HGO Has Fun With a Comic Opera Based on Vinkensport. Say What? 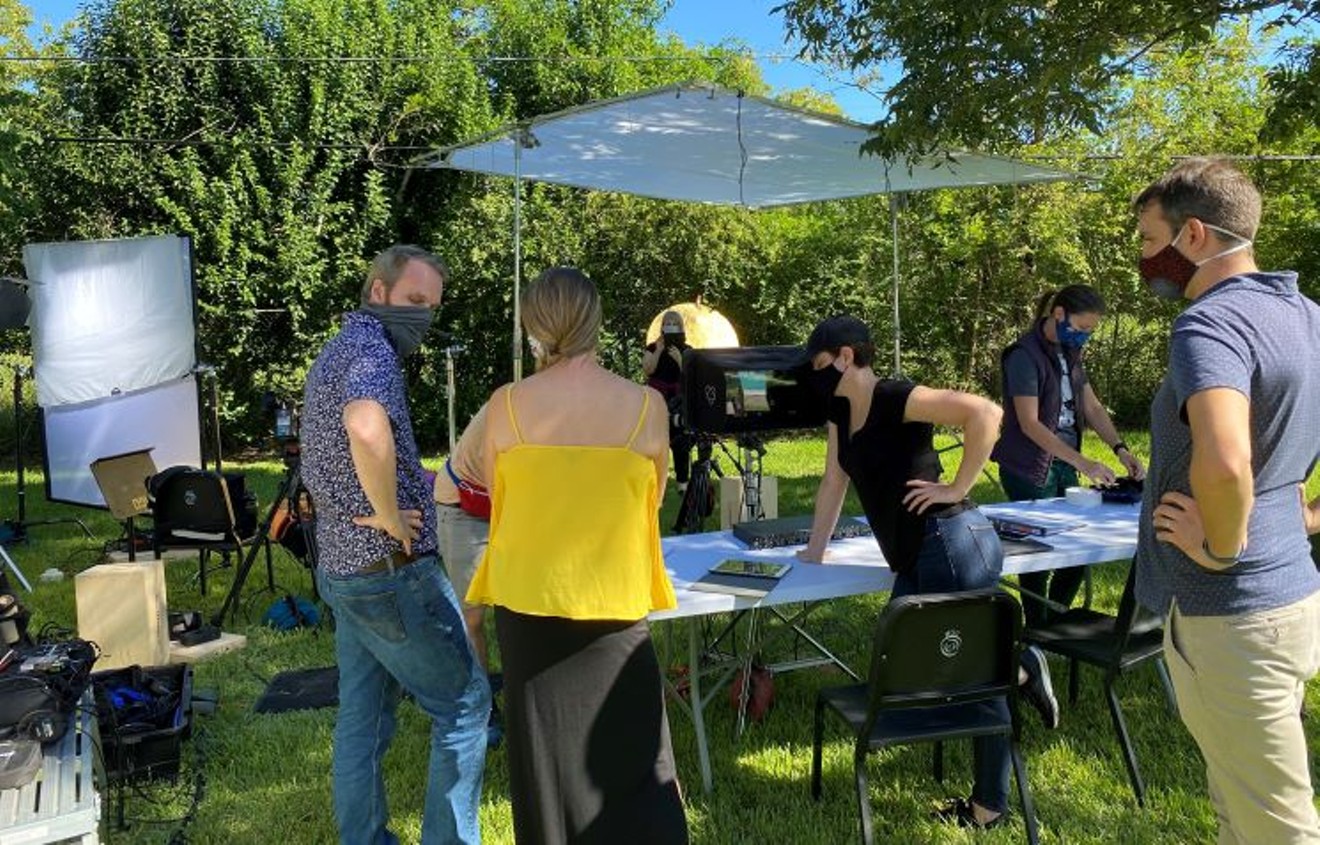 Filming an opera in the time of the coronavirus. Photo by Natalie Barron
Hear the word "Belgian" and where does your mind go to? Belgian ale? Hercule Poirot? Belgian horses? Belgian chocolate? How about the Belgian sport of professional finch calling?

No really, there is such a thing. And it provides the basis for Houston Grand Opera's next virtual venture: Vinkensport, or The Finch Opera. Composer David T. Little and libbretist Royce Vavrek came up with the comic opera which was first performed in 2010 at the Bard College Conservatory of Music in 2010.

HGO Digital will present a chamber version developed later which runs about 45 minutes and enlists the services of six singing cast members plus an "actor" played by HGO Chorus Master Richard Bado, Opera bass-baritone Ryan McKinny (he played the title role in Don Giovanni for HGO in the 2018-19 season and makes his home in Houston) proposed making a film of the short opera to HGO after E. Loren Meeker, artistic director of Opera San Antonio suggested it to him.

"I had started early on in the [COVID-19] lockdown making a lot of videos for our music channels and then had started making a few little short films for opera companies, McKinny says. He began a series of meetings with Meeker and his wife Tonya McKinny — whom he describes as "my partner in crime in all this stuff" — and made a short demo. HGO Artistic and Music Director Patrick Summers was intrigued by the idea and HGO decided to take it on.

In the opera, every singer has a bird and whoever’s bird chirps the most times in an hour wins. McKinny says, adding that while the birds are part of the opera, you never see them as they (supposedly) sit in a box in front of each singer. "It's sort of in the style of a mockumentary." he adds.

An orchestra of about eight people led by a conductor was part of the production, McKinny said. Ben Doyle did most of the filming (with some assist from McKinny because they were working on a tight schedule) in the backyard of an Airbnb rental in Meyerland. Most of it was filmed outside because McKinny says, it worked for the storyline of the opera and they wanted to make something that would have the best chances of keeping everyone healthy and safe from the coronavirus.  McKinny and Meeker co-directed.

"We filmed each singer separately and then we'll edit them together," McKinny says, adding that filming enabled them to do closeups on the singers in a way that live opera cannot.

McKinny thinks that even after the threat of the coronavirus spread calms down and the performing arts are able to resume more normal activities, that the kind of online presentations the Houston Grand Opera and other groups have been doing will not disappear.

"A more interesting way to think of this is not really as a stopgap between now and when things go back to normal but really as a time to experiment and learn what we can do as an art form. Opera was historically made as the art form that included all the other art forms. It’s music, it’s dance, it’s visual. … I know that if somebody like Verdi or Wagner were alive today they would be using all of the artistic tools they could.

"I don’t think it will ever totally replace live performance because that’s something humans inherently love. But I do think as an addition to that that this kind of art form is really here to stay."

Besides McKinny, the other singers include Alicia Gianni, Nicole Heaston, Ricardo Garcia, Elena Villalón and Kelly Markgraf. HGO made the selections of the performers.

"The singers are really excited to do it. A lot of them hadn’t been able to work for the last several months. And even more than that it’s really fun and new for them and they were all really game to jump in and try a new thing and I have to say they all were terrific," McKinny says.

"It’s a ton of fun. It’s not going to be like anything people have seen from opera before," he promises. Of and in case you're wondering, there is a winner. "Although how he wins is controversial," McKinny says. Maybe they need to bring in Hercule Poirot after all.

Vinkensport, or the Finch Opera is scheduled for 7:30 p.m. Friday October 23. To access it, go to Marquee TV, an on-demand streaming platform. For more information, visit houstongrandopera.org. Free.
KEEP THE HOUSTON PRESS FREE... Since we started the Houston Press, it has been defined as the free, independent voice of Houston, and we'd like to keep it that way. With local media under siege, it's more important than ever for us to rally support behind funding our local journalism. You can help by participating in our "I Support" program, allowing us to keep offering readers access to our incisive coverage of local news, food and culture with no paywalls.
Make a one-time donation today for as little as $1.