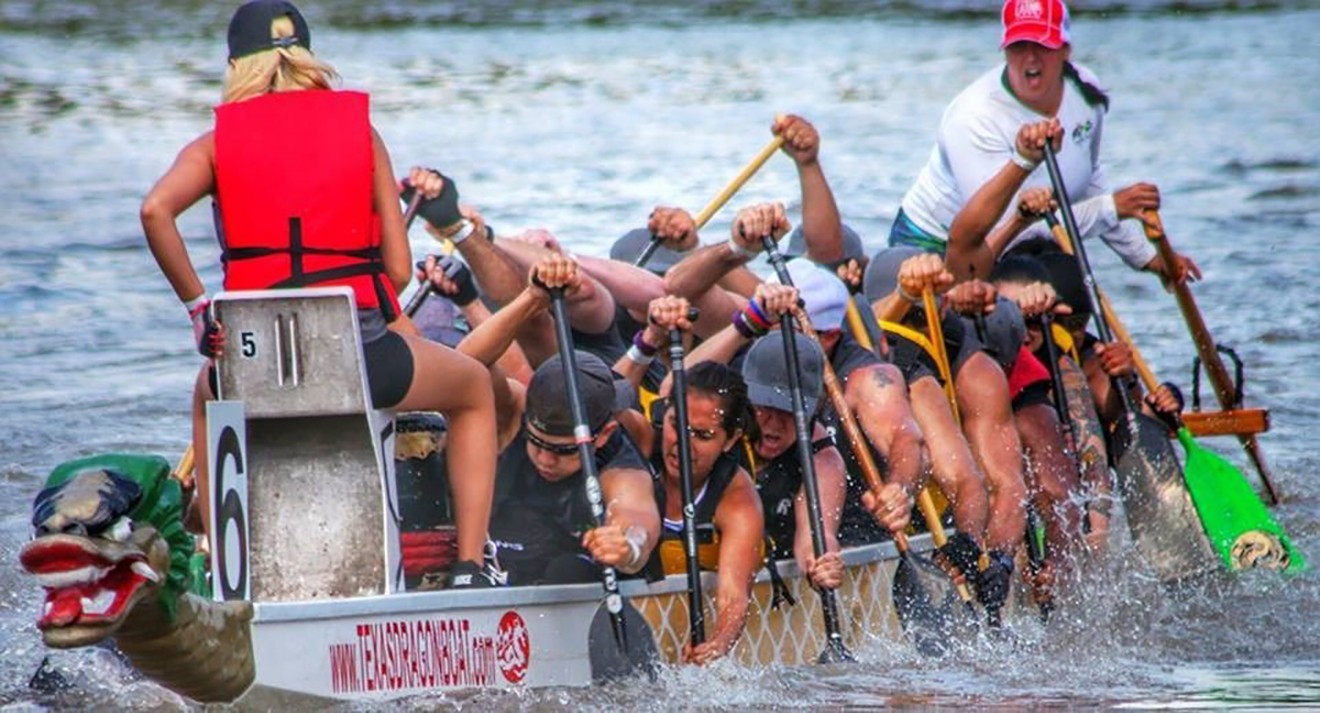 We can't guarantee the water will look like this when dragon boats fly across Buffalo Bayou, but expect plenty of adrenaline when Louisiana's Cajun Invasion tries to beat the reigning Texas teams. Photo courtesy of David Mandell
The tragic tale of drowned Chinese poet Qu Yuan (340-278 BC) is remembered with the sounding of a Chinese gong to mark the beginning of the Houston Dragon Boat Festival.

Yuan could not be saved by the fishermen who paddled as fast as they could to rescue the beloved poet, though they threw rice packets in the water to try and keep the fish from eating his body.

We won't see any zongzi (wrapped sticky rice) at H-town's version of the traditional Duanwu Festival, but we will find food and drink vendors on land as we watch the dragon boats fly across the water. There are plenty of vendors and artisans and even a kids' zone with free mementos from the Xfinity photo booth. 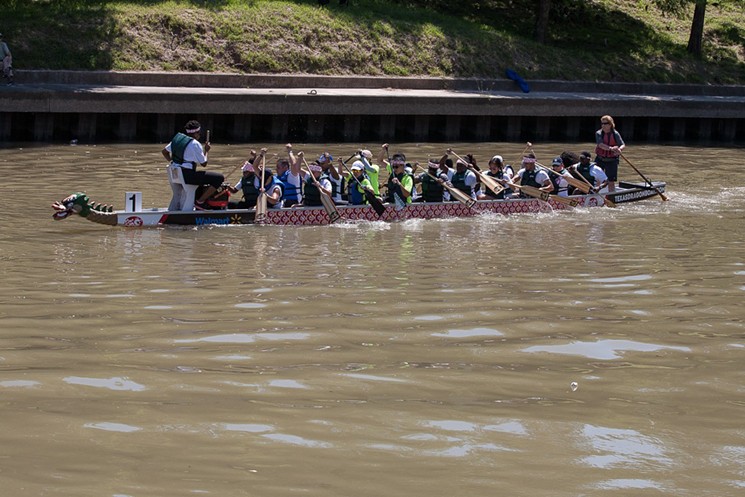 The Texas Dragon Boat Association maintains a fleet of ten boats and supplies all the boating, paddles, life jackets and staffing.
Photo by Eric Sauceda
The Texas Dragon Boat Association owns the fleet of ten boats, so they all have the same dragon head and dragon tail. "Each boat is 20 feet long, weighs 550 pounds and houses 20 paddlers, a steersperson that guides the craft, and a drummer," says David Mandell, TDBA's president and executive director. On paper it looks like a fair race.

Teamwork is critical for breaking away from the pack. "Really it's all about paddling in unison. What we’ve seen in the past is groups that were very, very strong paddling against one another, and teams that weren’t quite as strong were more successful," says Mandell. "We have steers people that we either use locally or we bring them in from all across the country to participate, national and international." 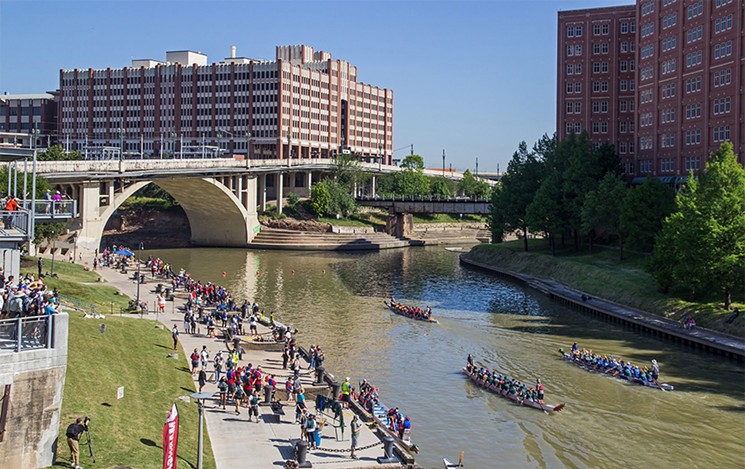 The Bayou City gets more exciting during the annual Houston Dragon Boat Festival.
Photo by Kevin Bailey
Dragon boat jargon includes "take it away," "all up" or "all down" and "engine room," which refers to the larger paddlers seated in the middle to back of the boat.

Louisiana imports Cajun Invasion are back again this year, but they'll have a hard time besting the local teams. "We do have the FYP Island Warriors, Hokulele and University of Houston Downtown. They are all significant teams that produce quick times; they are the ones to watch," says Mandell. "Also ConocoPhillips and KPMG on the coprorate side."

"In the early stages they traveled to China, got the dragon boat itch and they wanted to bring it our city. We partner with Buffalo Bayou Partnership and several other groups," says Mandell.

"[The festival promotes] cultural awareness and cross-cultural understanding and especially today we need to learn more about one another and understand that we’re more similar than we are diverse," says Mandell. "It’s a way of unifying our city and bringing everyone together."

Really, how often is there a good opportunity to wear a Viking helmet in Houston?
Photo by Eric Sauceda
There are all sorts of ways for Houstonians to get involved. "They can come in as a sponsor, as a volunteer, as an individual paddler to participate, and they can come out and watch and catch the dragon boat fever," says Mandell.

For those who do catch the fever, TDBA is hosting three additional events this year, including their first time on San Antonio's Riverwalk (though it's a section of the river that has more straightaways).