An Insider's Guide to 2018's RodeoHouston

Technically RodeoHouston opens February 27, but insiders know there's a whole host of pre-rodeo fun to be had, including the World's Championship Bar-B-Que Contest on February 22-24 (though snagging tix to the team tents depends on who you know), Go Texan Day on February 23 (wear jeans, boots and cowboy hats to work or school), the Rodeo Run followed by the Parade (television icon Dave Ward is the 2018 Grand Marshal) on February 24, and the Old West-inspired Trail Rides.

Sure, seeing 3,000 cowboys on horses riding alongside the freeway is a bit anachronistic, but it's one of the great things that sets us apart from the rest of the nation. Travel anywhere outside the United States and watch sneers of derision turn to wide smiles as soon as foreigners learn you're from Texas. Trail riders from all over Texas, as well as Louisiana, converge on Memorial Park on February 23, engage in some tall tales and campfire cooking, then saddle up for the parade the next morning. 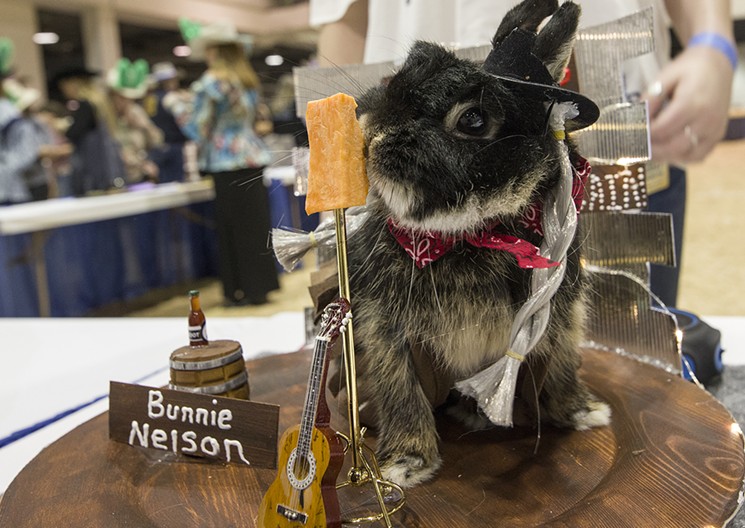 Bad puns and great costumes make for a fun time with the popular Rabbit and Cavy Costume Contest.
Photo courtesy of Houston Livestock Show and Rodeo™
Livestock and Horse Shows

Hands down, one of the most popular events is the Youth Breeding Rabbit and Cavy Costume contest on March 5. You can tell that the kids and their animals have really formed a bond when you see some of the outrageous get-ups.

Every year in the editorial newsroom, the newest reporter gets saddled with participating in the dairy goat milking contest, which is our version of Texas-style hazing. We don't have a victim to send this year, but it's always a blast to watch and this year's Celebrity Dairy Goat Milking Contest is on February 27.

Working dogs really seem to enjoy performing, and the always-popular Sheep Dog Trials on March 17 continue to be fan favorites. Other highlights are the USAF 802 Security Dogs on February 28, the K9s4COPS Hard Dog/Fast Dog Championship on March 5, and the high-flying Houston Disc Dogs on March 14-15 and March 17-18.

Texas 4-H and FFA students have been caring for animals all year long in anticipation of the junior market auctions, but it will be tough to beat last year with so many world records broken. We saw top bids for the Grand Barrow Champion ($212,000), Reserve Champion Barrow ($133,000), Grand Champion Goat ($180,000), and the Grand Champion Lamb ($270,000). All participants are guaranteed a minimum amount, and additional funds benefit the Rodeo's Educational Fund for scholarship and grant recipients.

We're not oblivious to some of the social media grumblings about this year's concert line-up, especially on heritage days, but this isn't the year to skip RodeoHouston. They're unveiling the brand new, state-of-the-art, star-shaped stage. It rotates, each of the five star points can even be raised and lowered, and there's a new 28-foot-tall motion-controlled video backdrop. So if you really, truly hate one particular music act, then vote with your pocketbook and go another day, but don't miss this larger-than-life, Texas-sized tribute to technology.

The OMG! ride at the carnival is just plain scary; we recommend holding onto the harness for dear life.
Photo by Meagan Flynn
Attractions and Activities

Cheesy can be good, and especially when you're talking about carnival food and carnival rides. Throw your diet out the window and be sure to indulge in deep-fried, cheese-covered, cholesterol-laden fare at the rodeo, and be on the lookout for our food writers' top picks for must eats.

Nobody actually ever wins anything with the carnival games. It's sort of like Las Vegas, where the house is stacked to win, but if you can just enjoy the old school fun and accept the fact you'll overpay for a plushy stuffed animal, then it's a nice, neon-colored night of fun under the stars.

Be sure to check out our guide to the carnival rides. We endured getting flipped upside down and experienced a bit of nausea last year so that you could get the 411 on the scary good rides and the scary (but not great) rides, as well as which ones were just kinda lame.

Pint-sized cowboys and cowgirls (no more than 55 pounds) try their hand at Mutton Bustin' in hopes of winning the shiny gold buckle.
Photo courtesy of Houston Livestock Show and Rodeo™
Rodeo

It's not only fun to say, it's fun to watch. Everybody loves the nightly Mutton Bustin', where five- and six-year-olds don safety gear and try to hold on to a sheep the longest, all in hopes of hearing the roar of audience acclaim and winning a shiny gold buckle.

Armed Forces Appreciation Day is February 28, Black Heritage Day is March 2, First Responders Day is March 5, Go Tejano Day is March 11 (with the Mariachi Invitational) and — in an effort to be totally, globally inclusive — International Days are on February 27-28 and March 1-3 (bring your passport or I-94 verification to gain entry to the International Room).

The ticket structure is perhaps the most confusing aspect of RodeoHouston, but here goes. If you've purchased concert tickets, then that gets you into NRG Stadium, NRG Arena, NRG Center and the carnival; ticket prices range from $18 to $350. Otherwise, grounds passes are available ($5 for kids, $15 for adults) and that gets you access to all events on NRG Park except for the rodeo and concert in NRG Stadium. Season passes also are available for $35.