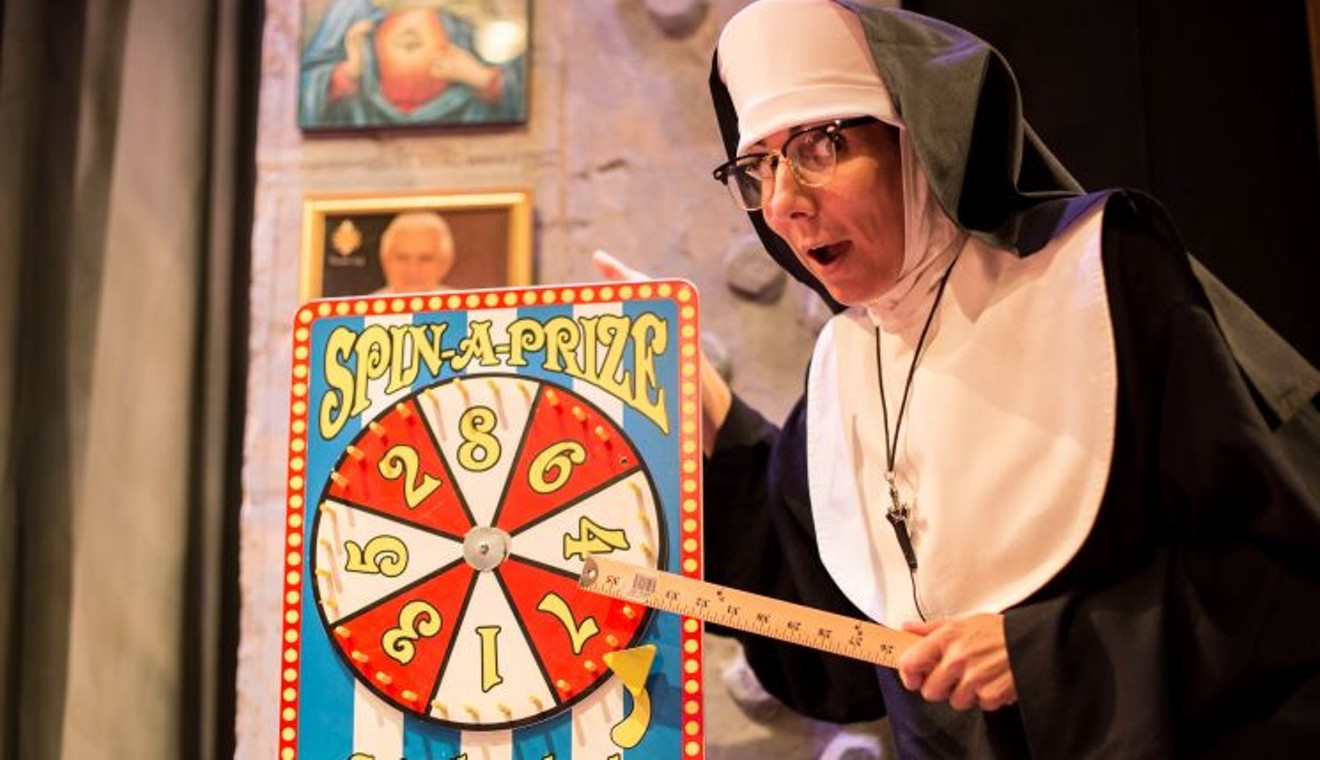 She's back! Photo by Claire Logue
When one of the key aspects of your theater show is interacting with the audience and thanks to COVID-19 there's no live audience in the room, that presents a problem.

As it turns out, not an insurmountable one for the technical wizards working for Stages theater where actress Denise Fennell will once again be channeling Sister at The Gordy, with a new live show every night delivered virtually.

Starting tonight, Fennell will once again return to Late Nite Catechism Las Vegas: Sister Rolls the Dice, to play Sister whose fund-raising talents and abilities at church bingo are now being explored on a whole other level.

Audiences will be interacting with the commanding/funny/determined character via Zoom. They'll be able to see her on stage and thanks to three large screens, she'll be able to see them (followers of The Voice will recognize the staging) as she teaches them how to gamble and remain within the tenets of Roman Catholicism.

Los Angeles-based Fennell is equal parts glad to be back performing live and to be in Houston.

"Playing Sister has been one of the most incredible joys of my life. The character is timeless and what’s so beautiful about this play is that it rolls with the times. Even though I've been playing the character now close to 10 years, every show is brand new to me. Every experience is taking place that day, that moment in time. It keeps the role really fresh for me and it keeps things really creatively stimulating for me as an actor. It's different every time.

"I have to say I love it even more now. There were 365 days this year where I wasn't quite sure how or when I would get back in front of an audience and I missed it so much," she says. "I wasn't sure when the time would be right to make people laugh again and just recently we have started things rolling again and I will see it differently for the rest of my life and I will never take one moment for granted on stage ever again."

"Just recently we have started things rolling again and I will see it differently for the rest of my life and I will never take one moment for granted on stage ever again." — Denise Fennell

The audience plays a huge part in making each show different, she says. There is a script she follows but depending on how the audience responds, Fennell gets to use her improvisational skills. She says she also spends time in whatever city in which she is performing, getting to know the local landmarks (She gave a big shoutout to Carrabba's Italian Grill). "I try to attend local events in Houston so I can share some of my experiences so they can understand that Sister's a real person, we're having a real dialog it's happening in real time."

In this particular Late Nite Catechism, besides the school fund-raiser to help the upkeep and repair for St. Bruno's, Sister is conducting a catechism class "Which is basically teaching the students to gamble within the guidelines of the Catholic Church so we all don't go to hell."

Fennell first became involved in Late Nite Catechism when she was acting off Broadway in Tony and Tina's Wedding when she met Maripat Donovan the co-creator (with Marc Silvia) and lone performer of Late Nite Catechism. When they encountered each other in hallways at the church where they were performing each remained in character.

Eventually Donovan called her, cited her "exceptional" improvisational skills and asked her to do her play. Fennell says she was young and didn't think she was ready to handle a one-person show but eventually Donovan wore her down, trained her in the role and the two became best friends.

Fennell said during the pandemic she finally "surrendered to the fact that when the theater community was ready to put me back in to the room they would do so in a safe responsible way."

Not having the audience in the room with her at The Gordy made her a bit uncertain but a tech run with a Zoom audience Monday night quelled any fears she had. "I am telling you, this is next level. The people at Stages have created a virtual classroom for me that is so real. On three sides of me I see seats where audience members would be. But in this case there's giant screens hanging down and instead of them sitting in the seats, the audience members are in giant boxes so I can see each and every one of them. The audience in the way they've created it, is able to talk to each other which is so wild to me. It's really taking theater to the next level.

"So it doesn't appear that I'm on television. It appears that I'm on stage performing live theater. It's spectacular."

One difference, she laughs about, is that during the tech run, some people's dogs entered the home screens. "I get to see into people's houses now. Last night I got to see some people's pets. People were holding up their dog. I thought, 'This is unbelievable, I'm actually getting to learn things about my audience I would have never learned because they don't bring their dogs to the theater."

Asked about the enduring appeal of Late Nite Catechism, Fennell says she thinks it's because "I bring a lot of my own compassion and love to it and it translates. I believe people are attracted to that realness. I also think people like to be yelled at a little bit. They like to be told what to do," she adds laughing.

Performances are scheduled at 7:30 p.m. Wednesdays through Saturdays and 2:30 p.m. Saturdays and Sundays through May 23. For information, visit stageshouston.com. $25.
KEEP THE HOUSTON PRESS FREE... Since we started the Houston Press, it has been defined as the free, independent voice of Houston, and we'd like to keep it that way. With local media under siege, it's more important than ever for us to rally support behind funding our local journalism. You can help by participating in our "I Support" program, allowing us to keep offering readers access to our incisive coverage of local news, food and culture with no paywalls.
Make a one-time donation today for as little as $1.