Wear Pink to Mean Girls at Broadway at the Hobby 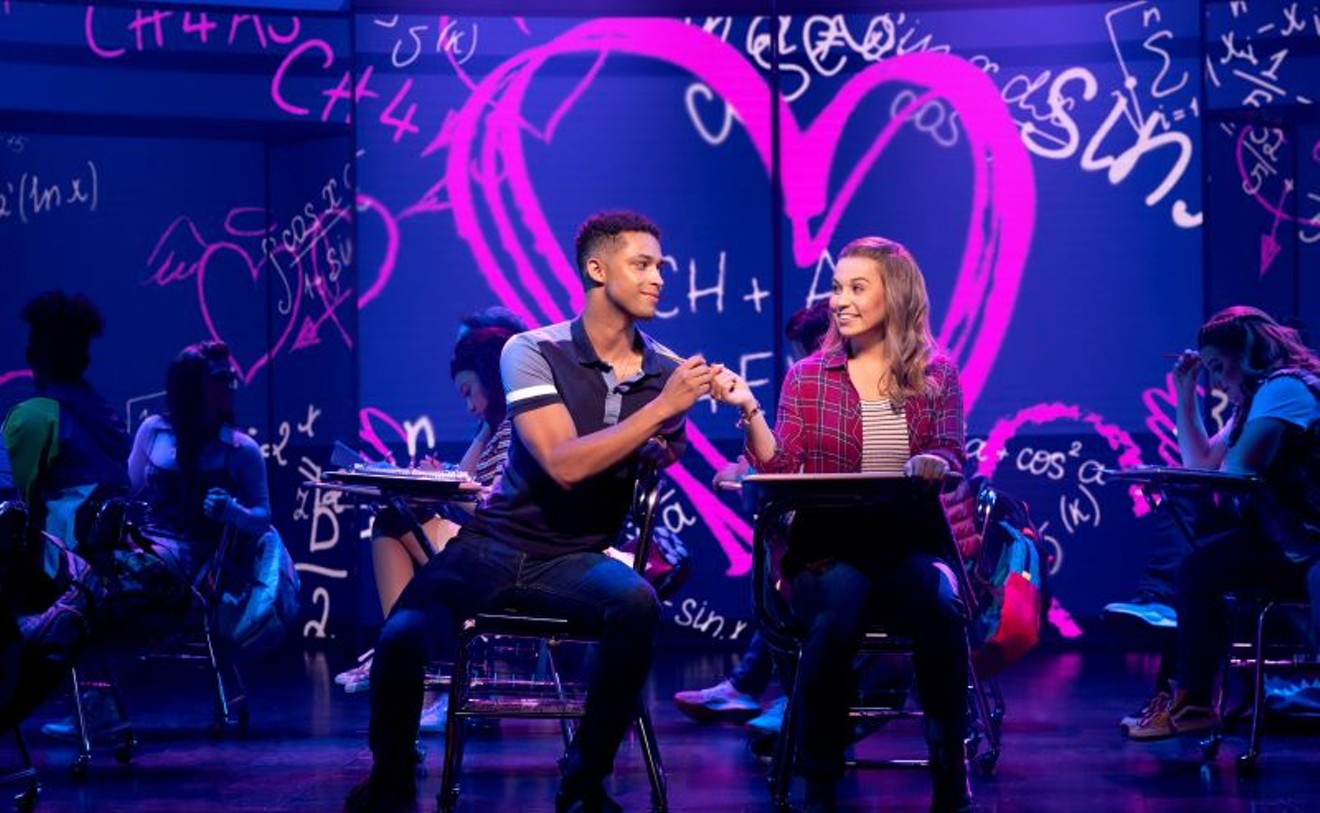 High school can be the most wonderful time in your life, filled with great teachers, forever friends, and perfect memories.

And, as most of us know, it can be awful, or at least have its awful moments. Tina Fey acknowledged that with her movie Mean Girls (based on Rosalind Wiseman's book Queen Bees and Wannabes), telling the story of Cady who moves from homeschooling in Africa to an American high school.

Now the musical version of Mean Girls is coming to Houston's Hobby Center and English Bernhardt  who plays Cady Heron says the storyline centers on her character not knowing who she is. As she tries to fit in she takes on the personas of whatever group she is interacting with, Bernhardt says, until she finally builds up enough courage and self-knowledge to be herself.

Initially, Bernhardt went on the show as a standby for three roles but since May she's been playing Cady alone. This has enabled her, she says, to delve even deeper into the character. "Cady is a character that's very relatable to me to play. She's a very kind soul," Bernhardt says.

"I didn’t deal with a lot of bullying [in her own highschool] but even in a minor way that I don't think you realize until you get older sometimes, there were groups I just wanted to be friends with and you know girls can be mean. They really can. I tried to be that kid who was friends with everyone," Bernhardt says. "There are always people that will exclude you or hurt your feelings or try to put you down to make themselves feel better for their own insecurities."

And as Bernhardt says, it’s something that doesn't stop in high school. "It still happens in the workplace — wanting to fit in and having people making you feel like you don't belong. That is something that I think we all bring our own selves to a little bit in doing this production every night."

The character of Cady is developed a bit more than in the movie, Bernhardt said. "You see a little more of her internal thoughts and her struggles and deciding what to do and how to fit in and how to be this new version of herself. It’s made me like her more and appreciate her more. She is very much the through story line. She is the constant. It makes me appreciate how she has to be receptive to all of it and  kind of like a sponge in a way that I think we all deal with especially growing up and in high school. I think as a character she’s written very honestly."

This being a musical, there's a hefty dose of singing that's been added to the 2004 movie version. "It gives you everything you want with the added musical element. Incredible dance numbers. It just kind of heightens it all and brings it all to life. "

Bernhardt (a perfect last name for an actress) started with dance when she was young. "I loved ballet and jazz and hip hop. I come from a very musical family; both my mom and dad and my brothers sing and play piano. There was always music in my house. My parents put me in a class at this incredible training base we had in North Carolina where I grew up called North Carolina Theater Conservatory. I started taking classes there — voice lessons and acting classes and classes that would teach you to incorporate singing and dancing together on stage. I think I did my first show when I was 8 years old.

All of which made her a perfect match for musical theater.

"Musical theater warms my heart and brings me joy. It's such a gorgeous art form. It can kind of transport you and take you away as an audience member. The magic of live theater is it is live and things happen and things go wrong. People forget lines and there are costume mishaps. The way that actors are so trained to adapt and to act on the fly. It's exciting and thrilling to be a part of it."

She's especially pleased to be back after theaters were shut down during the height of the pandemic and thanks the audiences for returning.

"It's incredible to be a part of a show that people love and know so well.. We'’ll have them say the one-liners back to us. It makes us feel like rock stars."

And she encourages anyone who comes to the show and feels the urge to "Wear your pink!"

Performances ate scheduled for August 16-21 at 7:30 p.m. Tuesday through Thursday and Sunday, 8 p.m. Friday and Saturday and 2 p.m. Saturday and Sunday at the Hobby Center, 800 Bagby. For more information, call 800-982-2787 or visit thehobbycenter.org orbroadwayatthehobbycenter.com.   $40-$189.
KEEP THE HOUSTON PRESS FREE... Since we started the Houston Press, it has been defined as the free, independent voice of Houston, and we'd like to keep it that way. With local media under siege, it's more important than ever for us to rally support behind funding our local journalism. You can help by participating in our "I Support" program, allowing us to keep offering readers access to our incisive coverage of local news, food and culture with no paywalls.
Make a one-time donation today for as little as $1.