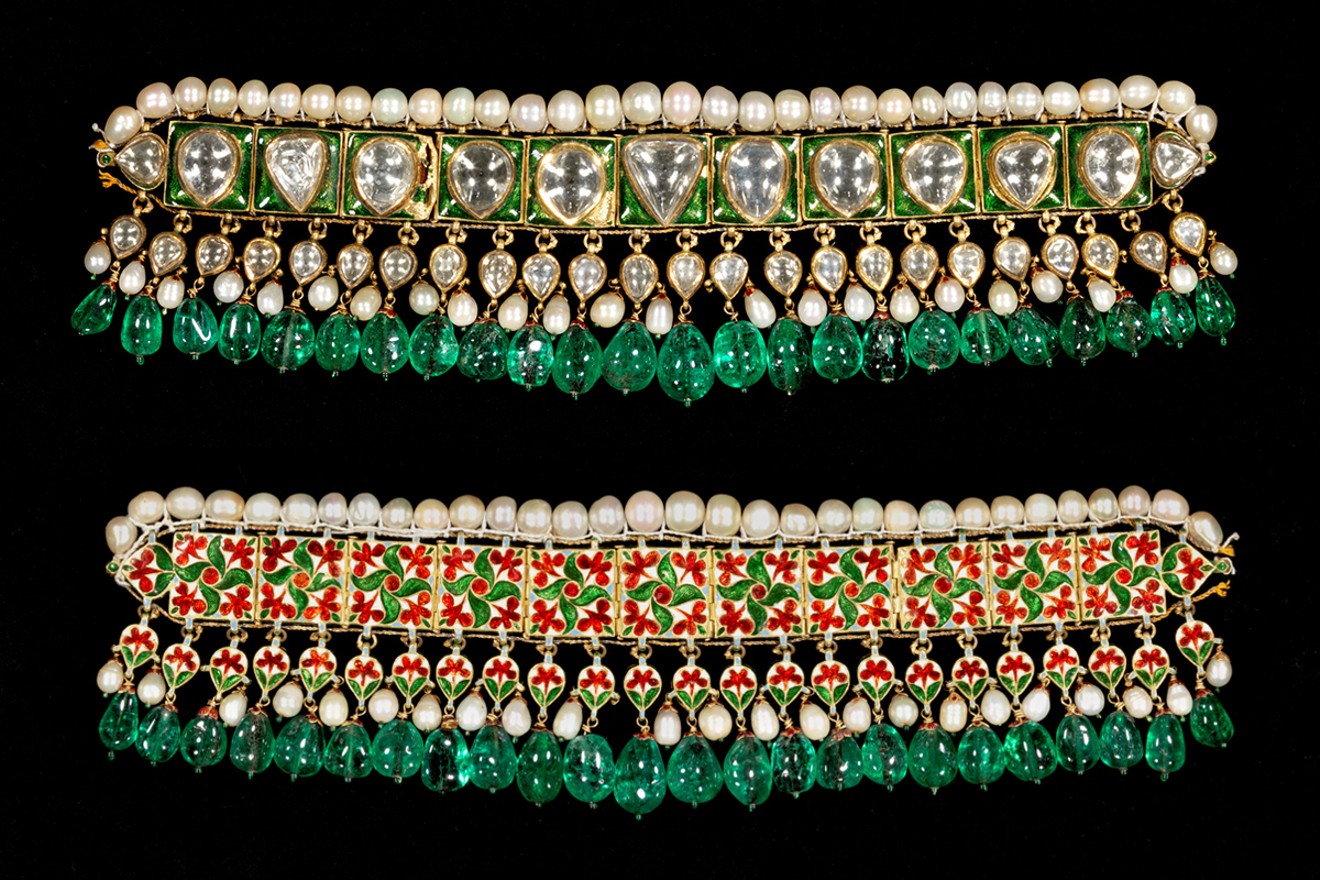 Objects from the Kuwait-based al-Sabah Collection are on view in "Peacock in the Desert: The Royal Arts of Jodhpur, India," including this necklace from India (probably Deccan), an 18th- or 19th-century stunner made of gold, diamonds, pearls, emeralds and enamel. Photo courtesy of Museum of Fine Arts, Houston
Between Meghan Markle's engagement to the most eligible bachelor in England and Netflix's binge-worthy The Crown (Did Prince Philip, the Duke of Edinburgh, really step out on Queen Elizabeth II?), there's a renewed American interest in the British royal family.

So perhaps it's time to cast that net a bit wider and look at another royal family, one with just as much drama, courtly machinations and bling as the House of Windsor. The Rathores ruled one of the largest princely states in India for more than seven centuries, and their jaw-dropping wealth did not go unnoticed by other empires who eventually ruled India: the Mughals and the British.

In 1460, the Rathores carved the Mehrangarh Fort into the imposing rocky terrain of Bhakurcheeria (mountain of birds), 410 feet above the city of Jodhpur, but not before burying a man alive to ensure prosperity and success. Each generation added its own touch, including the construction of several interior palaces and courtyards. Even Rudyard Kipling had fever, writing in his book, Out of India, that the fort was "a palace that might have been built by Titans and colored by the morning sun."

Today the fort serves as home to the Mehrangarh Museum Trust, established in 1972 by the current dynastic head of the Rathore clan, His Highness Maharaja Gaj Singh II, preserving the treasures from this important period in Indian history.

About 250 objects from the museum, along with contributions from the al-Sabah Collection, Kuwait, are coming to the United States for the first time ever in a traveling exhibit that makes its first stop at the Museum of Fine Arts, Houston, before moving on to Seattle and Toronto.

"Peacock in the Desert: The Royal Arts of Jodhpur, India" is divided into six sections. There's an area devoted to wedding traditions that features video projections of 20th-century weddings, horse elephant mannequins tricked out with ornate regalia and royal and clues to how important marriages were in forming key alliances. Could this be evidence of an unidentified flying object? Jodhpur, Shiva on His Vimana (Aircraft) with Himalaya (detail), folio 53 from the Shiva Rahasya, 1827, opaque watercolor and gold on paper, Mehrangarh Museum Trust.
Photo by Neil Greentree, courtesy of Museum of Fine Arts, Houston
We'll learn more about the Rathore clan and its history, view a model of the Mehrangarh Fort (made of silver), turbans by the desert community, and imagine royal life through pages of illuminated manuscripts. Ancient texts reference flying machines that could travel over land and sea or even as far away as the moon; conspiracy theorists have latched onto these air chariots as evidence of UFO phenomena.

When the Mughals arrived and eventually took over, the new empire engaged in political and military alliances, resulting in sabers, daggers rifles. Courtly scenes and documentation of war can be viewed in 17th- and 18th-century paintings, and the "Conquest and Alliance: The Rathores and the Mughals" section of the exhibit even includes a 17th-century court tent, the oldest of its kind still in existence.

More armor is on view in "Durbar: The Rathore Court," although this section also highlights the incredible creativity of artists and craftsmen in the late 18th century through woven canopies, textiles, paintings and a gilded throne.

This 19th century Jodhpur, Pavilion (Baradari), finished with lacquer and gold, is on loan from the Mehrangarh Museum Trust in "Peacock in the Desert: The Royal Arts of Jodhpur, India," on view at the Museum of Fine Arts, Houston.
Photo by Neil Greentree, courtesy of Museum of Fine Arts, Houston
Visitors will experience the mysterious zenana, or women's wing, of the Rathore palace through paintings, carpets, screens, a magnificent pavilion jewelry. Women were able to watch court activities from behind intricately-carved and held an important role in culture through their preservation of heirlooms and rituals.

The last section of the exhibition, "The Raj," includes extravagant, large-scale objects influenced by the arrival of the British in 1818, including clothing, paintings even a 1944 Stinson L-5 Sentinel aircraft.

"Peacock in the Desert: The Royal Arts of Jodhpur, India," opens at the Museum of Fine Arts, Houston, on March 4 and is on view through August 12.

Concurrently on view is "Modernism on the Ganges: Raghubir Singh Photographs," a photographic exhibit of Indian life organized by The Metropolitan Museum of Art, New York, and on view through June 3.