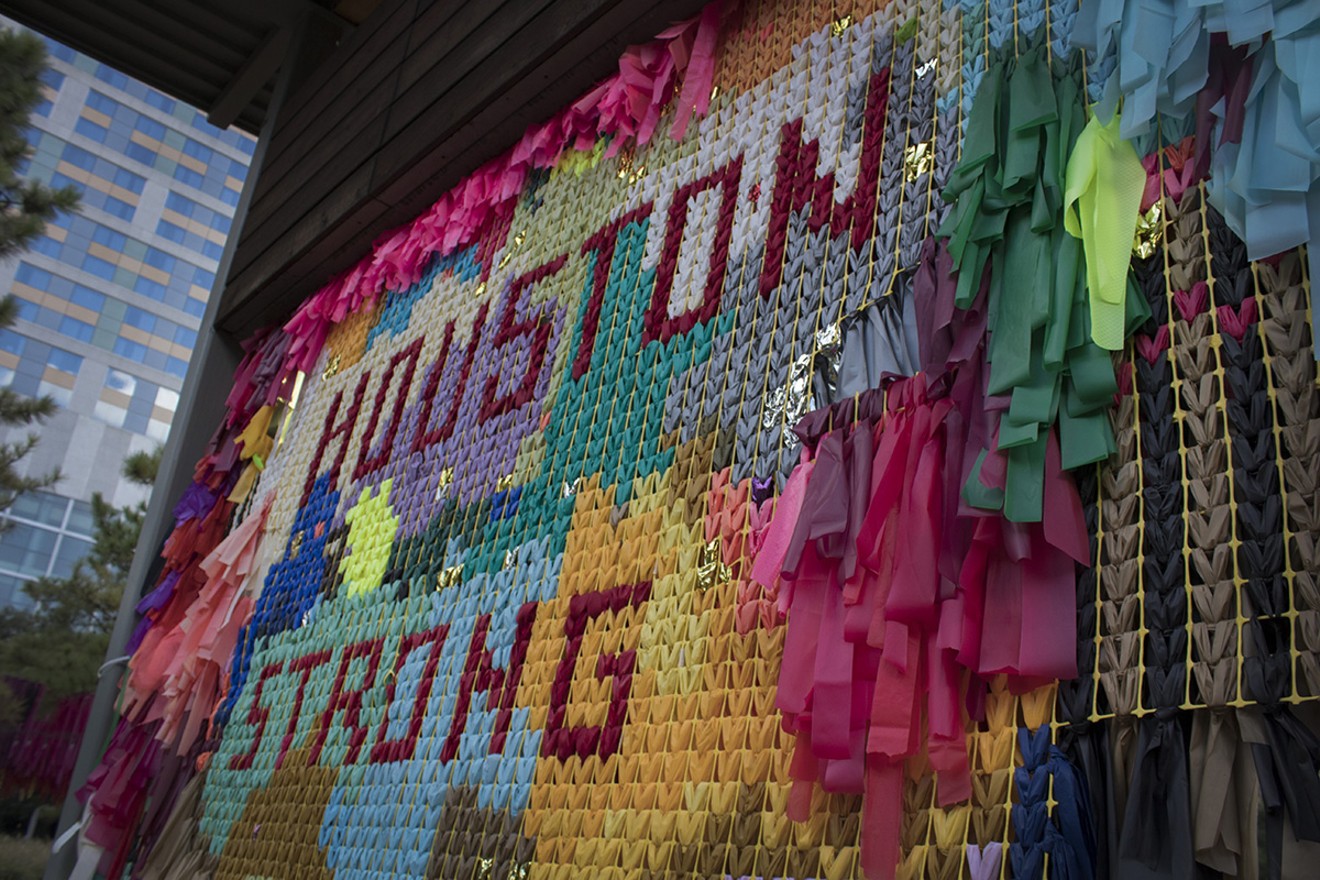 High schoolers across the region turned their cameras on the Bayou City this past year, documenting the roller coaster ride that we called 2017, and the results are rather surprising.

"I think that, personally, I was almost nervous about the images that we would see because of the effects of [Hurricane] Harvey," says Elizabeth Roath Garcia, studio and gallery programs manager at the Museum of Fine Arts, Houston, about the more than 300 submissions received for the 23rd edition of "Eye on Houston: High School Documentary Photography."

"I thought this year would be a dark show. I was pleasantly surprised to see the positivity. Sometimes it takes the eyes of a kid to tell us that."

Celebration of Made History by Andrew Abdalla (Bellaire High School) is on view in "Eye on Houston: High School Documentary Photography" at the Museum of Fine Arts, Houston.
© Photo courtesy of Andrew Abdalla and the Museum of Fine Arts, Houston
What originally began as the annual "Eye on Third Ward" exhibit by students from Jack Yates High School, guided by photography teacher Ray C. Carrington III, expanded about four or five years ago to include more schools in the Houston Independent School District.

"Obviously Harvey played a big part in this year’s submissions and essentially probably a quarter of the submissions dealt with Harvey: during, the aftermath or the rebuild. Other themes are nature, City of Houston and the people of Houston," says Garcia, labeling this year's show an honest snapshot.

What resonates throughout the exhibit is the pride that the students, and Houstonians in general, have for our city. "We had students that were at the parade, taking and documenting their experiences there," says Garcia.

Only Rivers by Larissa Bernstein (Bellaire High School) is on view in "Eye on Houston: High School Documentary Photography" at the Museum of Fine Arts, Houston.
© Photo courtesy of Larissa Bernstein and the Museum of Fine Arts, Houston
The photographs that document Hurricane Harvey will resonate with just about everybody who weathered the flooding. Garcia says it was the students who decided whether to go with color or black and white, and that the monochromatic images, like Larissa Bernstein's Only Rivers, have a somber feel.

Yzette Torres from Carnegie Vanguard High School has two images in the exhibition, each featuring a young girl from different points of view. "One with her looking out so you don’t see her face, that symbolizes a lot of us, and one where it’s more focused on her face," says Garcia. "There's this question of 'What is happening?' Yzette, her depth of field in that photograph is stunning and it really captures that moment that Houstonians were going through."

The Effects of Harvey by Yzette Torres (Carnegie Vanguard High School) is on view in "Eye on Houston: High School Documentary Photography" at the Museum of Fine Arts, Houston.
© Photo courtesy of Yzette Torres and the Museum of Fine Arts, Houston
The exhibit opens to the public on January 24, but the photographers will have to wait a little bit longer for their red carpet moment. "Because they’re still in school, we have a big reception for them generally in March after spring break. They bring their families; we have the students speak about their experiences, the teachers speak — every student here has a teacher who is challenging them. We have the [museum] staff talk."

"We celebrate with a little bit of a party. Light apps, tons of cookies, lemonade, tea on a Saturday afternoon. It is a fun experience because the students get to show off their work," says Garcia. "We have pictures of the students standing by their images. For me it is such a wonderful opportunity to share with the students."

Photographic submissions are sent to the MFAH as digital files, and the curated images are then printed out, matted and framed by the museum staff for the exhibit. After the show closes this summer, the matted prints will be returned to the students. "They’re ten by fourteen, so they’re a beautiful gift back to the students who lent them to us," says Garcia.

"Eye on Houston: High School Documentary Photography" opens January 24 and runs through June 24 at the Museum of Fine Arts, Houston, in the museum visitors center at the corner of Binz and Fannin, 713-639-7300, mfah.org, free.