Sword Fights, Flying and Beasts: Peter Pan Offers it All at Houston Ballet 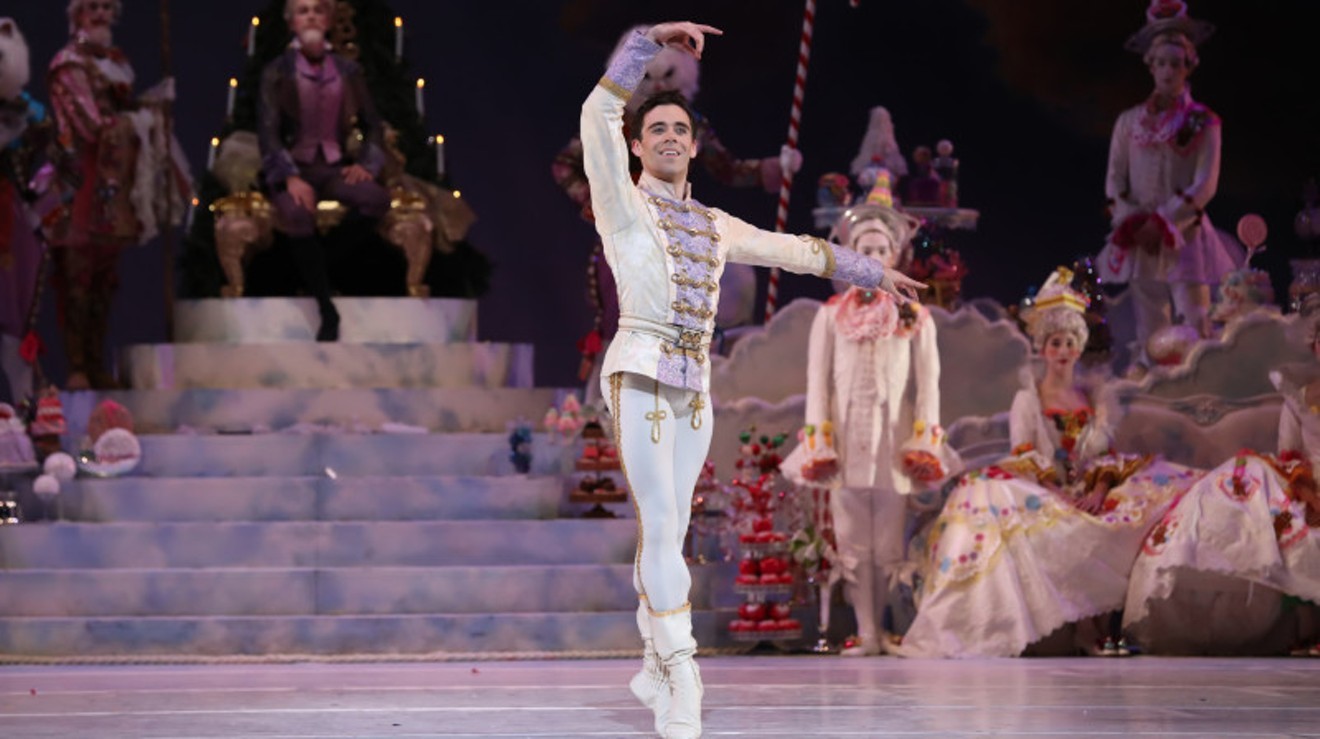 Connor Walsh has been known for roles like this as the Nutcracker Prince in The Nutcracker. Now he'll be dancing as the Father and Captain Hook in Peter Pan. Photo by Amitava Sarkar (2019), Courtesy of Houston Ballet

It's hard to beat a show about flying.  Whether they be superheroes, a nanny with an umbrella or in the case of Peter Pan, a boy who won't grow up, there's something fascinating about watching someone take to the air, unencumbered by the usual laws of gravity.

But, of course, Peter Pan is more than just the story of the boy who could fly, lived on the island of Neverland where he has constant adventures and would never have to worry about mortgage payments. It's as much about the ties between parents and children and the children who decide to become adults and have to figure out a way to do this without losing the best parts of their younger selves.

Scottish author and playwright James M. Barrie wrote Peter Pan in a 1904 play and a 1911 novel. The story has been presented in many forms: the 1954 musical, a cartoon version and the 1991 movie Hook. Now Houston Ballet is about to be once again perform a version by acclaimed choreographer Trey McIntyre with music by Sir Edward Elgar.

Principal dancer Connor Walsh will dance the roles of  Wendy Darling's father in one performance and Captain Hook in another for the first time. This is a version with some less carefree underpinnings — the Darling children have been raised by their nannies and their parents ignore them, still mourning the loss of one brother who disappeared as a baby.

"There are definitely some darker elements and I think part of that is to get to a sense of realism," Walsh says. "Peter is actually a rough kid just like a kid you would imagine if he was raising himself in the woods with other kids; what would he actually be like. It still is filled with an equal amount of charm and familiarity. Anyone who knows the story of Peter Pan will not necessarily be scratching their head to what's going on.

"Equally there's some backstory to Wendy's family who's lost a young child in the beginning which could be Peter — the story alludes to [the possibility] it could be Peter, that Peter is actually related to Wendy. The parents [who first appear wearing masks] show an element of loss and coldness to the children to share what that experience might be like," Walsh says.

As for Hook, he remains "a flamboyant, extravagant character that you would hope any Hook would be," Walsh assures. In fact, it is a role he relishes to have a chance to dance.

"Captain Hook is such a blast. He’s a wild character. He’s a narcissist. The world exists to be his audience. He's like a spoiled child who nobody ever ever told him he could possibly be wrong or that he ever had to be nice to anyone. He is loud. He is extremely into himself. Trey often uses Jim Carrey as a reference that he can just go on tangents and monologues of whatever he wants. He can do no wrong. He doesn’t connect with human behaviors and emotions in the same way as other people do. He tries to put them on, he tries to be nice but he's only pretending just to get what he wants. He has no sense of what it is to be nice to anybody," Walsh says.

At the same time, Walsh says: "He's playful; he's fun. He's a dynamic character which for somebody who plays a lot of lonely princes in my career — melancholic, simpler characters — to play something this wild and extravagant is a really good time for me.

Houston audiences who saw the Houston Ballet production in 2013 will see some changes in the 2022 version.

"Trey is  such a creative guy. His creativity is sort of endless. He’s constantly playing with different mediums whether it's photography or visual art or creating websites. He's a very energetic creator and you can see that in this production whether it's through the flying, through the great sets, the amount of layers that are happening. The amount of different characters. There's no shortage of ideas," Walsh says.

"I haven't seen many full lengths of Trey's so to see an evening of his creativity is I think something to really enjoy and savor."

There are new costumes for the Beasts,. "Trey is also someone who's making changes and adjustments up until the show. So every time he revisits the ballet he's constantly making changes. He rechoreographed a dance, re-costumed it and it's punk rock. It's wild. It's playful. It's colorful. The new costumes are worth the trip out to the theater just to see some of these new dances. "

Growing up, Walsh says identified with the Hook version of the story watching it over and over again. But  rather than being Peter Pan flying about he wanted to be one of the Lost Boys. "I'd love the view but I'm pretty comfortable on the ground."

One thing he keeps in mind to present day is that "Peter Pan  is a story about youthfulness and growing up, what we lose when growing up and what we should keep. I think the arts are very much similar in that way. We're speaking to the part of humanity that we should be holding onto and that we should be striving toward.

"I hope that everybody who comes, leaves feeling like they've touched their inner child, their humor, their creativity, their playfulness as well as seeing some gorgeous dancing along the way."

Performances are scheduled for September 9-18 at 7 p.m., Friday, September 9; 7:30 p.m. September 10, 16 and 17; and 2 p.m. September 11, 17 and 18 at the Wortham Center, 501 Texas. For more information, call 713-227-2787 or visit houstonballet.org. $25-$220.
KEEP THE HOUSTON PRESS FREE... Since we started the Houston Press, it has been defined as the free, independent voice of Houston, and we'd like to keep it that way. With local media under siege, it's more important than ever for us to rally support behind funding our local journalism. You can help by participating in our "I Support" program, allowing us to keep offering readers access to our incisive coverage of local news, food and culture with no paywalls.
Make a one-time donation today for as little as $1.