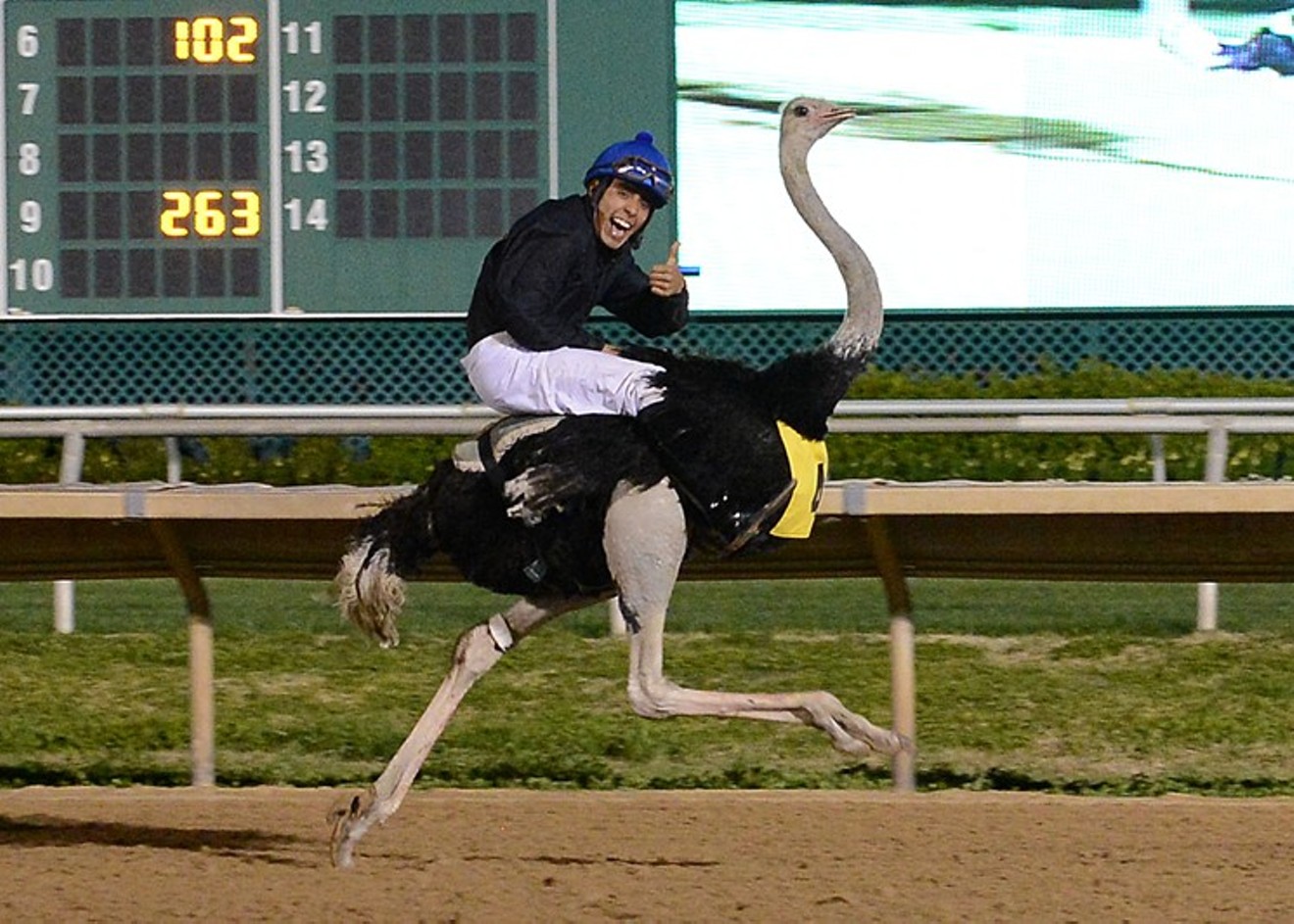 They don't allow betting during the ostrich races but, if they did, our bet is that not all jockeys make it to the finish line. Photo by Coady Photography
Talk about wild mood swings. One of the most sensitive and intelligent of horse breeds, the Arabians, are set to race on the same track as ostriches and camels over at Sam Houston Race Park in early March. The ostrich and camel races are sort of a palate cleanser between live horse racing, bringing plenty of laughs and even a few bumps and bruises.

The cantankerous ostriches are known for being just plain mean. It takes balance and agility to not fall off, and there have been more than a few races where riderless ostriches make it into the home stretch.

The camels, on the other hand, are pretty laid back and there's even a meet and greet before the races. "We actually put up tents and the camels and ostriches have to be separate from each other — two sets of tents out in the pavilion. The fans can come out and walk by and go look at them," says Wayne Hodes, SHRP senior vice president, though he doesn't suggest petting or feeding the animals.

Hodes says the ostriches and camels are 180 degree opposites from one another. "You don't want to go close to [the ostriches]. Whereas the camel is a big animal but it's more like a horse or a dog; most of them are docile," says Hodes. The camels can run at about 30 miles per hour and they generally have celebrity riders or special guest riders, like first responders. "The ostriches are faster and might be able to top off at 40 miles per hour for a certain length of time; our races are 100 yards."

Pre-race activities include eyeing the horses in the paddock area, where curious kids and betting adults can get as close as ten feet away. "There's also an area over there where we have European donkeys, Chip and Dip; they can feed the donkeys peppermints," says Hodes.

Saturday night's big events are the stakes races, where SHRP hosts the H.H. Sheikh Mansoor Bin Zayed Al Nahyan Global Arabian Horse Flat Racing Festival. "One [race] is the Sheikha Mubarak Ladies World Championship, featuring female amateur jockeys from around the world," says Hodes. As many as ten different countries are represented as the jockeys compete for the $41,500 purse.

This year the H.H. Sheikh Mansoor Festival is celebrating its tenth year, kicking off 100 races and events in 90 countries. "Three are in the United States, of which Houston is one of them. It's part of the U.S. Arabian Triple Jewel, the triple crown in the United States. We are the first leg of the Amethyst Jewel, out of three legs, and that’s for professional riders, male or female; Arabian horses specifically," says Hodes. That race brings with it a $48,500 purse.

The late Sheikh Zayed bin Sultan Al Nahyan was the founder of the United Arab Emirates and this year marks the 100th year anniversary of his birth. Hodes says partnering with the festival, which is sustained by the Abu Dhabi Tourism and Culture Authority, allows the race park to highlight Arabian races with this level of funding.

And just like baseball's seventh inning stretch, the race park is known to do a sing-along to Kenny Rogers' The Gambler, along with a few other distractions for those who can't sit still: inflatable sumo suit wrestling, turtle races, baby and dad races, and T-shirt tosses.

"On Friday nights we have a popular promotion, 50 cent beer nights. For a millennial or GenXer, a younger crowd comes out on a Friday night. We have specials like a two dollar glass of wine from 6 to 9 p.m." They also serve a buffet in the Winner's Circle Restaurant ($30) and concessions on the Paddock and Club Levels, plus there's the ultra-swanky member's-only Jockey Club.