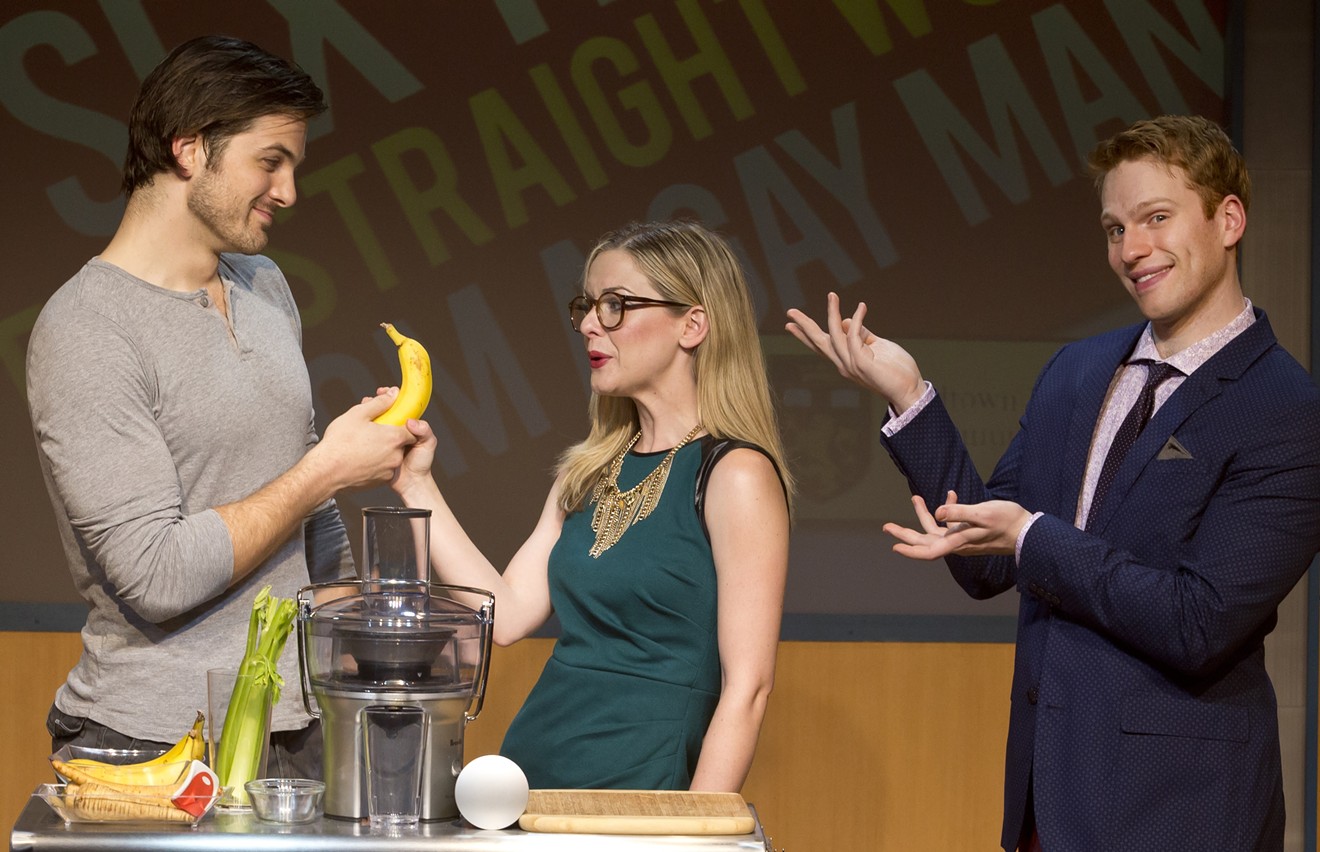 Robyn, Dan and Stefan in "Sex Tips for Straight Women from a Gay Man" Photo courtesy of Lott Entertainment Presents

A few years back, New York theatrical producer Matt Murphy had the inspiration for his next big project. “I said to my wife, ‘I want to do a faux sex tips seminar, but I need to base my advice on something,’” he recalls. “And she said, ‘Well, there’s this book all my friends passed around in college: Sex Tips for Straight Women from a Gay Man.’ And there it was, the greatest title for a show since I Love You, You’re Perfect, Now Change.”

Still running off-Broadway, Lott Entertainment Presents Sex Tips for Straight Women from A Gay Man, the aptly titled, laugh-out-loud interactive sex romp, is coming to Houston for a short-run special event at the Alley Theatre. Murphy, who also adapted the show for the stage, says it’s likely to rev your engine before the curtain is drawn. “The feedback I never tire of hearing is that our show improves people’s sex life,” he laughs. “It’s fun, a little titillating, and will make people blush a little. But it’s also a great refresher course!”

The three-person musical, based on a nonfiction title by Dan Anderson and Maggie Berman, came together after Murphy (who also serves as the show’s producer) met with the literary twosome to pitch the idea. “I met with the authors,’ he recalls. “[Dan] being the gay and [Maggie] being the straight woman, and the beneficiary of his tips…I loved their sense of humor, it was kind of Will and Grace before Will and Grace existed.” After their positive encounter, Murphy had concluded one thing: “I wanted to put that dynamic onstage.”

Due in no small part to Murphy’s history of successful original theatrical productions (he produced the New York debuts of Thurgood with Lawrence Fishburne, Impressionism with Jeremy Irons, Virtually Me and the Tony-Award winning Best Musical production of Memphis), Sex Tips opened off-Broadway in 2014 to good reviews and, more important, high bachelorette party approval. Yet ironically, Murphy notes, the other production he’s most proud of staging couldn’t be more different from Sex Tips. “Oddly enough, The Bernstein Bears LIVE, a family musical – that’s been touring around the country for almost ten years now, it ran in New York for six years.” Talk about a diverse résumé.

Another off-Broadway phenomenon with Murphy’s name on it is Altar Boyz, the 2005 Gary Adler-Michael Patrick Walker collaboration focused on an over-the-top Christian boy band concert (featuring songs like “Church Rulez” and “La Vida Eternal”). “In fact,” the producer chimes in, “I loved Altar Boyz so much, and the way the characters in that show treated the audience as if they were the audience of the event in the story… I loved that feeling so much that I kind of [borrowed that conceit] for Sex Tips.”

Also of note, book author Dan Anderson has been uniquely involved in the stage production. “I knew to pull off that feeling of [their relationship], I needed some sort of framing device. So the framing device was a meet-the-authors night in which the author of the night was Dan Anderson himself,” he laughs. “So the usual moderator at the Houston Community College — when it comes to your town — is suddenly unavailable and so there’s a female moderator stepping in. She’s kind of a shy, reserved, mousy, librarian type. And she has no idea what book is being discussed.”

“This is a romantic comedy in that it’s a girl-meets-hot-guy-gay-guy-helps-girl-get-hot-guy story. And there is a happy ending,” Murphy says, comfortingly. A happy ending: for both the characters…and maybe a few couples in the audience.