Untitled [Houston Ship Channel], by Harry Worthman, 1964, is on view in "South and North of the Border: Houston Paints Houston" at The Heritage Society Museum Gallery, August 16-November 24. Photo by R. Tibbits
Houston's architecture isn't designed to last forever. We wax nostalgic about the Shamrock Hotel with its star-studded opening fête and immense swimming pool, watch anxiously as the Astrodome and Magic Island flounder in architectural purgatory, and are grateful that the 1915 Texaco Building has been transformed into a luxury high-rise. Even the flood-prone Spaghetti Warehouse looks like it will be saved.

But most of our iconic structures won't survive the test of time. Other than through photographs, our only memory of the iconic Witch's Hat house is the Victorian-era roof that has been repurposed at a Sixth Ward dog park.

Except, as it turns out, early Houston artists have been documenting Houston's landscape all along. And now we'll be able to view more than 80 works — dating back to as early as 1852 — in "South and North of the Border: Houston Paints Houston."

"There are some that show specific buildings in the 1850s; those buildings are long gone. Most of the work is from the 20th century," says Randy Tibbits, coordinator of The Houston Earlier Texas Art Group, a group that is sponsoring the exhibition along with the Center for the Advancement and Study of Early Texas Art and the two hosting venues.

"[It shows] the evolution of the city the way artists in the city saw it," says Tibbits. "They look at something and decide how they want to present it." 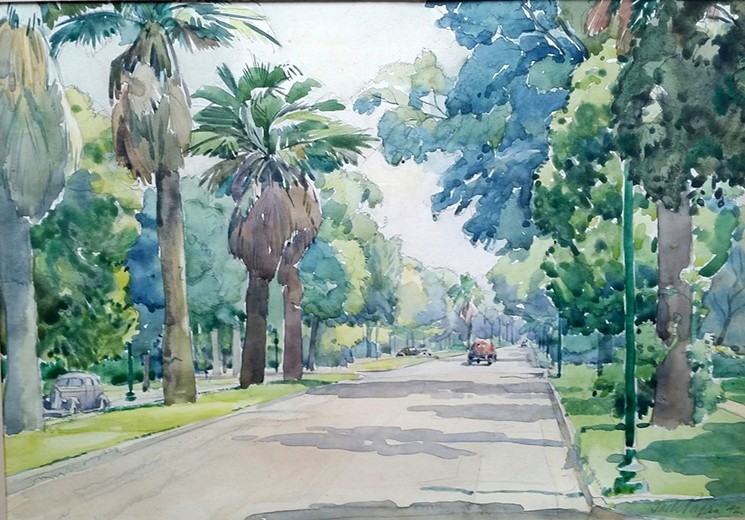 Not a mattress store in sight. Montrose Boulevard, by Jack Pagan, 1942, is on view in "South and North of the Border: Houston Paints Houston" at The Heritage Society Museum Gallery, August 16-November 24.
Photo by R. Tibbits
Tibbits says the body of work does show Houston's progress but also captures a sense of loss. It's hard to imagine Montrose Boulevard — with its narrow lanes, neon sign clutter and a few too many mattress stores — looking like Jack Pagan's scene from the early 1940s.

"The Montrose Boulevard scene is the way it was in 1942 but also, even then, it has that sort of hint of nostalgia. I think the artist was aware it wasn’t going to be that way forever," says Tibbits. "People are going to see the vast change in this city in terms of the skyline; it skyrocketed." (The most recent painting in the show dates to the early 1980s.)

The exhibition is being mounted along with a separate-but-related exhibition, "South and North of the Border: Houston Paints Mexico." Combined, this makes for what should be the largest exhibition of historic Houston art ever displayed. Objects have been borrowed from almost 25 lenders including the Rosenberg Library and Bryan Museum in Galveston, the Museum of Fine Arts, Houston, Rice University, the Houston Public Library and The Heritage Society.

"Even Ginger Berni [collections curator at The Heritage Society] said, seeing the works, she was 'blown away,'" recounts Tibbits. "And that's her life, looking at Houston's historic artifacts. To get to see the extensive number and range of visions of Houston."


"The artists help us come to that vision of what the city was, what it is and what it can be," says Tibbits.


The "Houston Paints Mexico" exhibit is being mounted at a separate location and features more than 60 objects ranging from 1905 to the early 1980s, many from the same artists in the "Houston Paints Houston" exhibit. 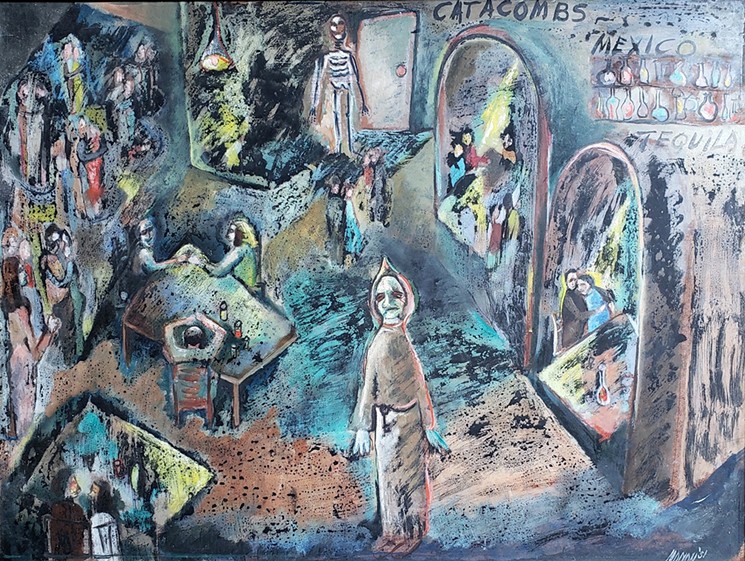 Catacombs [Night Club], Mexico City, by Mildred Wood Dixon Sherwood, 1951, is on view in "South and North of the Border: Houston Paints Mexico" at the Julia Ideson Building, August 25-November 10.
Photo by R. Tibbits
The exhibit demonstrates the length of time that Houston artists were intimately involved with traveling to Mexico, presenting their vision of Mexico — albeit through a North American tourist's eye — and discounting the idea that Mexico should be perceived as a negative entity.

"It's only in the last ten to 15 years that there has been the idea of Mexico being sinister; I think it's becoming less sinister now," says Tibbits. "But there was a time when [early Houston artist] Grace Spaulding John took a train by herself into Mexico with her young children."

"Mexico has never been an enemy; it's a place. Only recently has it been thought of as the enemy," adds Tibbits.

"Houston is a city that looks to the future while also figuring out what it is about Houston that's unique," says Tibbits. "The art community here was not huge. In the early days there weren't hundreds or thousands of [artists]. This is our work; it’s unique to Houston. We do have an art history." 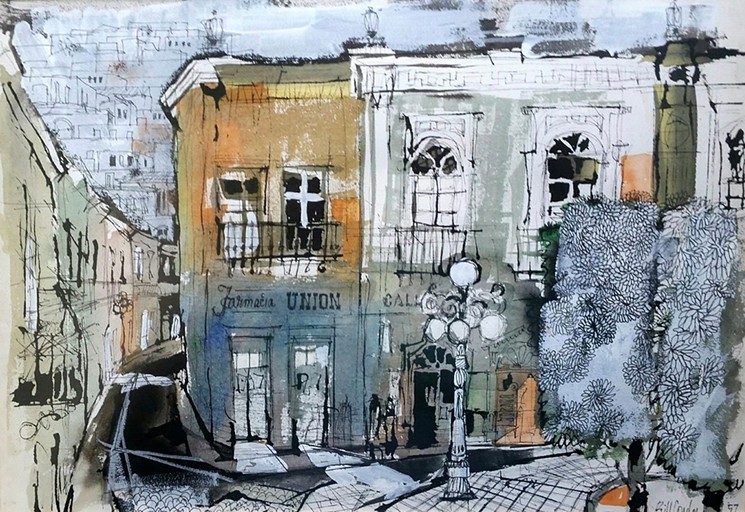 Untitled [Guanajuato drawing], by Bill Condon, 1957, is on view in "South and North of the Border: Houston Paints Mexico" at the Julia Ideson Building, August 25-November 10.
Photo by R. Tibbits
Tibbits points out that the exhibits dovetail with other area shows that are helping to draw greater attention to early Houston artists, which means it's time to get out of the classroom and into the galleries. The MFAH is showing "40 Years of Discovery: Gifts of Clint Willour" through October 14, Beaumont's Art Museum of South Texas is showing "A Sense of Home: The Art of Richard Stout" through September 2, the Panhandle-Plains Historical Museum's Graphics Gallery includes cotton farming prints by Merritt Mauzey, and there's always something on view at William Reaves | Sarah Foltz Fine Art.

"South and North of the Border: Houston Paints Mexico" is scheduled for August 25 through November 10 at the Houston Public Library, Julia Ideson Building, open 10 a.m. to 6 p.m. Tuesdays and Wednesdays, noon to 8 p.m. Thursdays, 10 a.m. to 5 p.m. Fridays and Saturdays, 550 McKinney, 832-393-1662, houstonlibrary.org/location/julia-ideson-building, free.
KEEP THE HOUSTON PRESS FREE... Since we started the Houston Press, it has been defined as the free, independent voice of Houston, and we'd like to keep it that way. With local media under siege, it's more important than ever for us to rally support behind funding our local journalism. You can help by participating in our "I Support" program, allowing us to keep offering readers access to our incisive coverage of local news, food and culture with no paywalls.
Make a one-time donation today for as little as $1.