The tall ship Elissa was built in 1877 and calls Galveston home, but she was built in Aberdeen, Scotland. She is one of only three ships of her kind in the world to still actively sail. Photo courtesy of Galveston Historical Foundation and Tall Ships America
The Gulf Coast is going to see a lot of action this April, with the Tall Ships Challenge® 2018 Series kicking off in Galveston before racing to Pensacola and doubling back for a big New Orleans finish.

It's an immersive experience with plenty of bells and whistles, including sailing trips on some of the visiting ships and land-based activities like a nautical themed tattoo competition (family friendly, please), Elmo Zumwalt's 57th Sailor Chin Harvest (for those sporting brag-worthy beards and mustaches), and the Pickled Brothers Circus. The Lynx is fairly new — built in 2001 — but she was inspired by The Privateer Lynx, a historic ship that served during the War of 1812.
Photo courtesy of Galveston Historical Foundation and Tall Ships America
"The Parade of Sail is the kickoff of the weekend, a way to tie in the other side of Galveston," says Will Wright, director of communications and special events for the Galveston Historical Foundation, which is co-presenting the Tall Ships Challenge along with Tall Ships America. "The rest of the festival is on the north side of the harbor; this involves the Seawall. They’ll be traveling with sails down from East Beach to 35th then turning around and heading back." 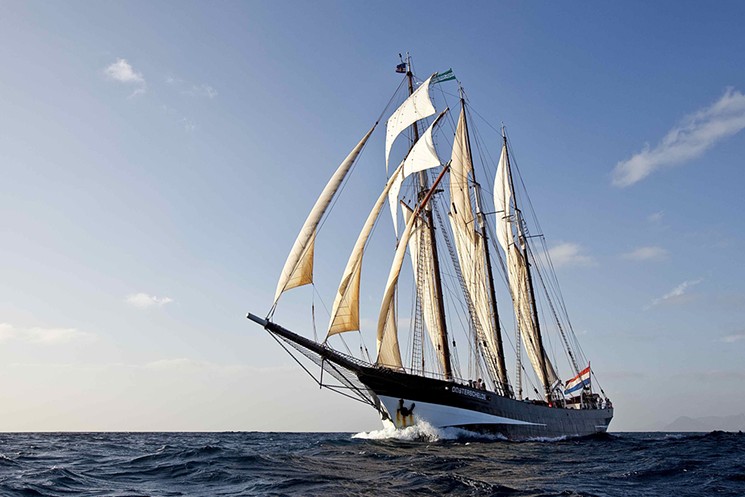 The Oosterschelde is as much fun to say as it is to watch. The three-masted topsail schooner was built in Rotterdam, Netherlands, in 1918 and has been spotted off the coast of Morocco.
Photo by Arthur op Zee, courtesy of Galveston Historical Foundation and Tall Ships America

Wright says the April 5 Parade of Sail is open to the public and they're inviting ships and boats to join in, but advance coordination with the parade marshal is requested. Wright says they've even received word that a group of boats is sailing over from Lake Charles, Louisiana. We're digging all the watch parties that have been set up at some of our favorite haunts: Beerfoot Brewery, Hotel Galvez & Spa, Rumors Beach Bar, Hemingway's and others. 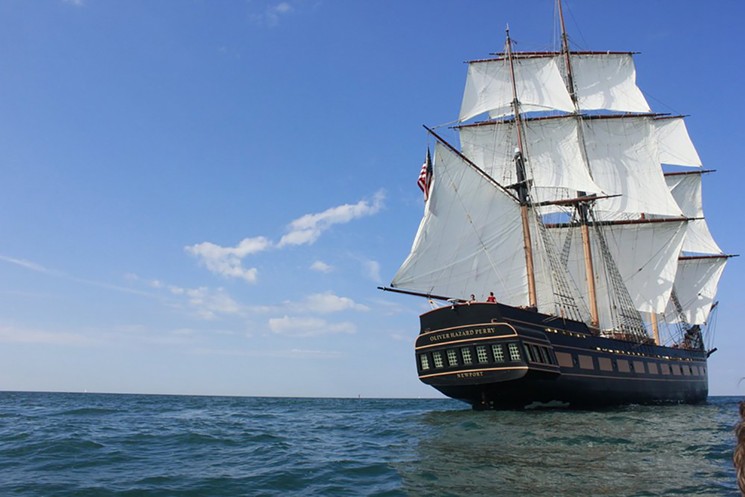 This steel behemoth still has that new boat smell, built in 2015 in Canada and Rhode Island. She is named after U.S. Navy Commodore Oliver Hazard Perry, who led our country's first naval victory over the British during the War of 1812.
Photo by Jess Kaelblein, courtesy of Galveston Historical Foundation and Tall Ships America
The crews on ocean-going vessels often eat like kings — it's a way to keep workers happy when they're cut off from ordinary temptations — and so we're looking forward to the Tall Ships Top Chef Competition.

"Top Chef will feature four chefs from four of the ships," says Wright. It's being held at Saengerfest Park (2300 Strand); on April 6 they're doing appetizers and eliminating one chef, April 7 brings the entree round with another elimination and the final two go head-to-head on April 8 with the dessert round. "Each day is a different mystery ingredient. Local celebrity chefs and food critics do the judging," says Wright. "These chefs definitely know what they're doing." 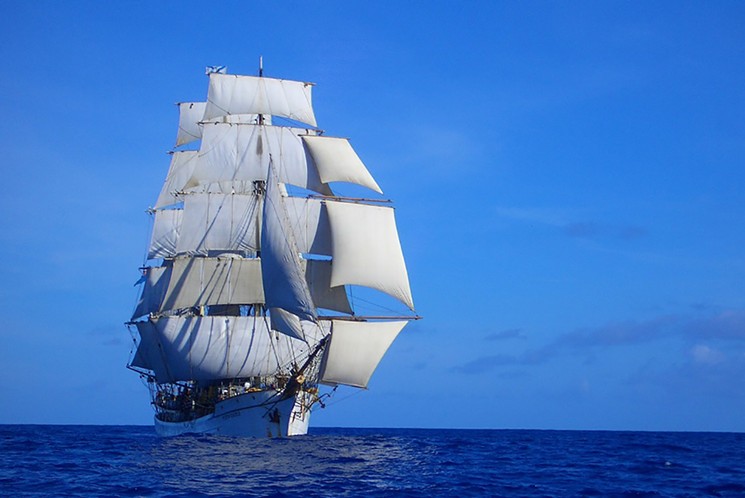 Dubbed "The Liberator of Norway," Picton Castle was built in 1928 in Wales, United Kingdom, and is on its seventh world circumnavigation voyage.
Photo by Sail On Board, courtesy of Galveston Historical Foundation and Tall Ships America
The festival grounds include three stages, with magicians, jugglers and variety acts scheduled between musical entertainment. For those wanting to take a day sailing trip, Wright suggests signing up ahead of time. "We’re expecting a really large turnout for this. It’s not uncommon for these types of festivals to garner 75,000 or more. I would say that if people are coming down to see the ships, get into the festival for one ticket, or into the festival and onboard for another ticket," says Wright. "Get there early; the lines can be longer later in the day." General George S. Patton's schooner, the When and If, was built in 1939 in Wiscasset, Maine.
Photo by When and If, courtesy of Galveston Historical Foundation and Tall Ships America
Houstonians worried about drinking and driving can check out the lodging section of the website; the Galveston Historical Foundation seems to have thought of everything.