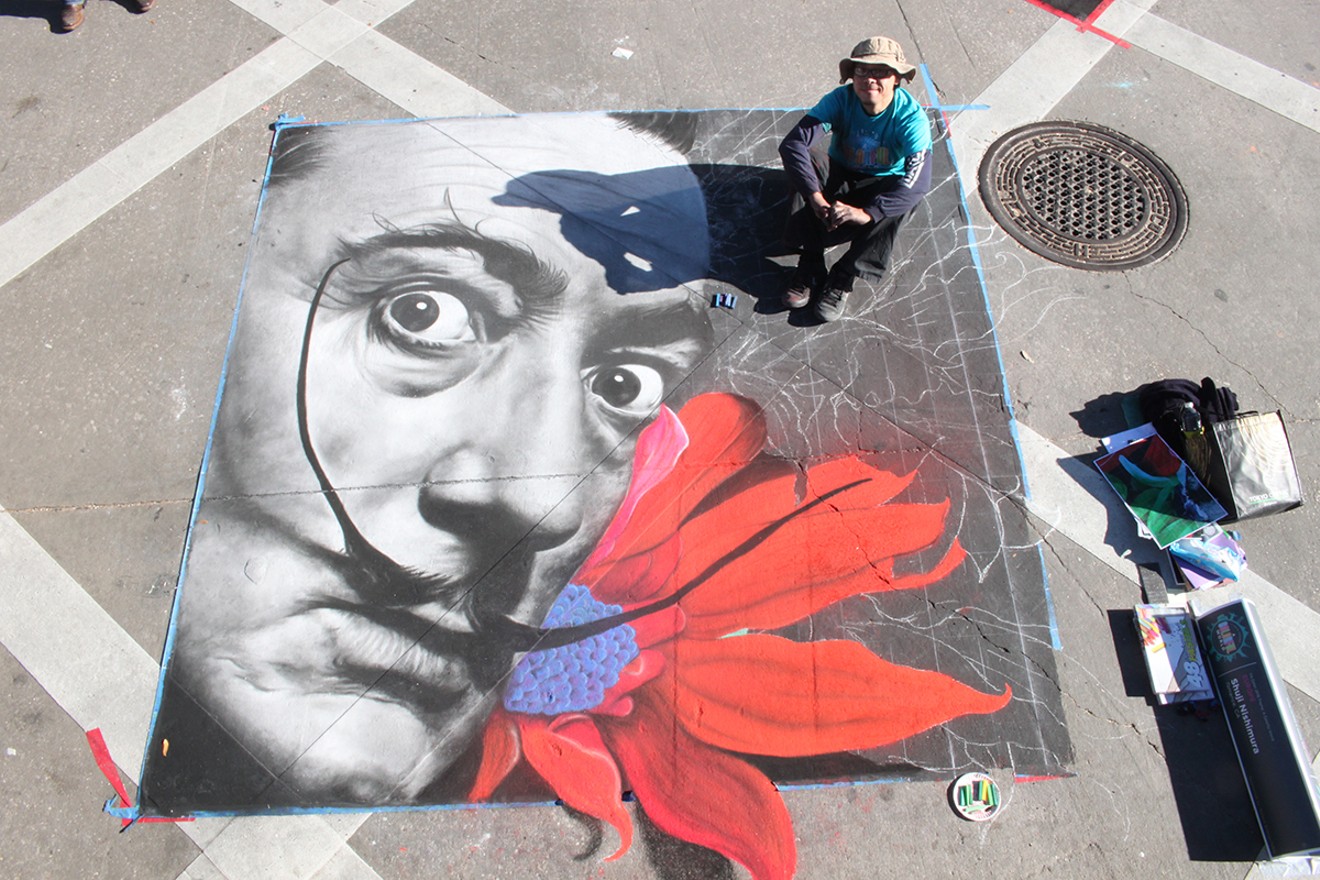 Now in its 12th year, the Via Colori street painting festival features award-winning painters from all over the world. Photo by Don Suttajit
Salvador Dalí had an eye for the surreal and you'll find plenty of that — plus trompe l'oeil, celebrity portraits and a trip down memory lane — during Houston's annual street painting festival.

Now celebrating its 12th year (and with a new presenting sponsor to boot) Texas Children’s Hospital presents the Houston Via Colori Festival® is happening November 18-19, rain or shine, though we've got our fingers crossed for the latter.

"So the theme this year and I’m super excited about it is 'decades.' We’re celebrating 70 years of The Center for Hearing and Speech being open," says Kathlee Akers, event manager, about the organization that provides support for children with hearing loss.

Akers says seven featured artists are being asked to do something representative of one of the decades. "We’re kind of doing the '50s to the future, looking forward to what's to come in Houston's future. We're really excited." Our bets are on Elvis, though we're not sure if they're going with the early years or the white bedazzled jumpsuit years.

The theme this year is "70 Years in Color" and seven featured artists have each been assigned to a decade, beginning with the '50s.
Photo by Don Suttajit
More than 200 amateur and professional artists are getting in on the street painting action, and you can even paint your own 24-inch square for a $10 donation, but don't forget to look up, because there's plenty of fun to be had above ground.

"Stephanie Rice is with Colonial Blue; she is a band who has played at the festival for many years and last year she had a brush with fame and was on The Voice and made it to the top ten," says Akers. "She's been super gracious and nice, as always, returning with her band and flying in from L.A." The line-up also includes a return of The Mighty Orq, as well as other local favorites.

For those who pony up for the VIP Lounge, expect an aloha retro '50s tiki event on Saturday, and a space-themed event on Sunday with a photo booth. "Costumes are appreciated if anyone is daring enough," says Akers.

VIP Lounge tickets are just $40 and come with food, drinks and six mini-events. Costumes are encouraged.
Photo by Don Suttajit
So in addition to checking out some great but temporary art, plenty of people-watching (they expect 30,000 visitors) and a look back at Houston over the decades, there's a feel-good aspect to this popular event.

"All the proceeds go to The Center for Hearing and Speech. [Via Colori is] one of our biggest fundraisers so it’s absolutely crucial to our organization that we hit our goals," says Akers. "We serve over 10,000 children each year that may not have access to hearing aids, cochlear implants or even speech therapy. Our goal is to not turn any child away." She says her office is attached to the school, and it's rewarding to see how much the kids change over the course of a year.