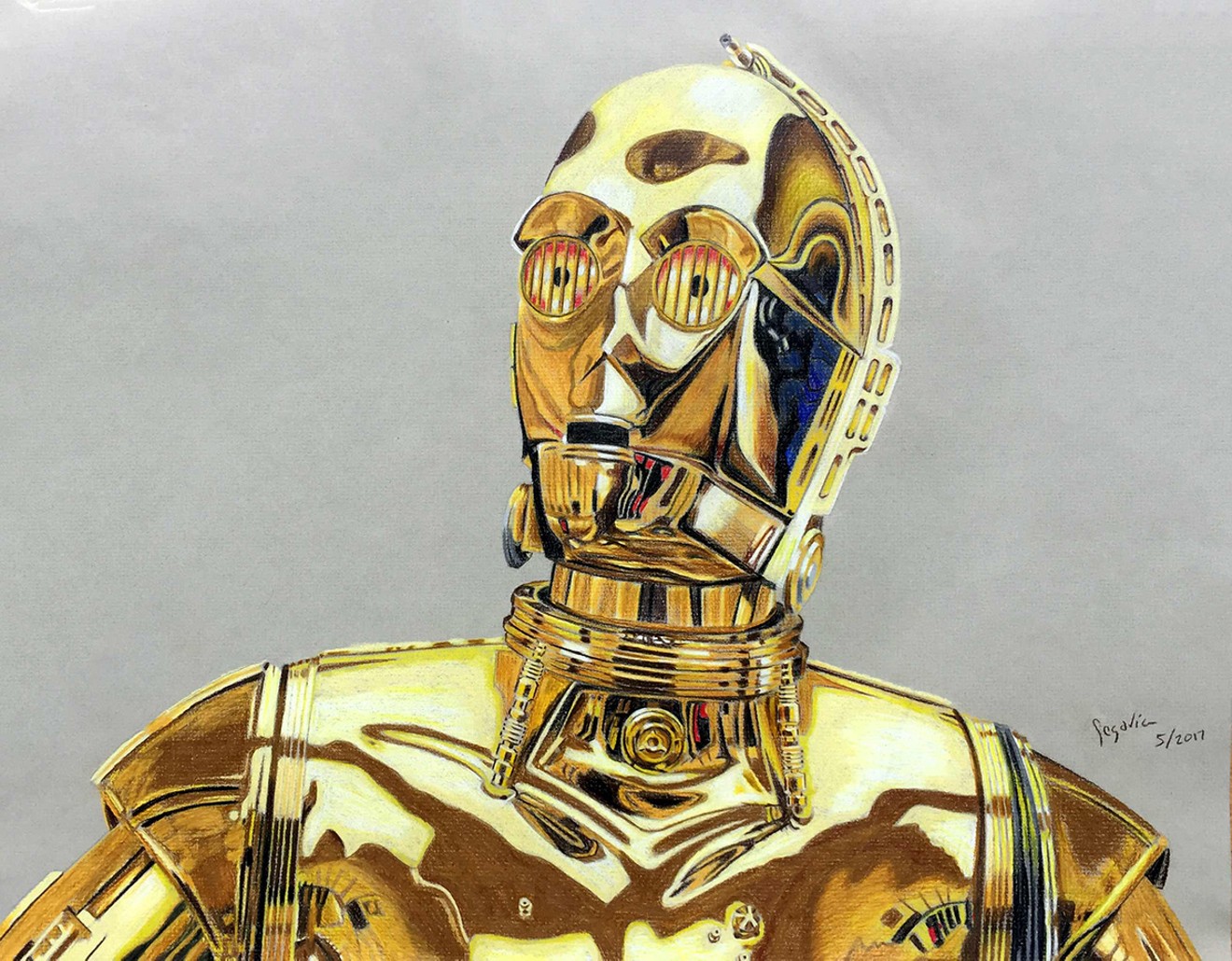 View Star Wars-inspired art from more than 100 artists, including this piece by John Segovia, during the 7th Annual May the 4th Art Festival in Houston. Photo courtesy of the artist and May the 4th Art Festival
Sometimes good things come out of bad puns. "May the Force be with you" segued to "May the fourth be with you" — dating back possibly to 1979 when Margaret Thatcher became prime minster. Here in Houston we can proudly boast that H-Town is home base for one of the largest Star Wars-inspired art festivals in the country. So large, in fact, that Lucasfilm owner Disney took notice (ahem) so we're walking the straight and narrow when discussing H-Town's 7th Annual May the 4th Art Festival.

Local artist, entrepreneur and art curator Dandee Warhol is quick to point out that the fest is not affiliated with or approved by Lucasfilm, so we can get that right out of the way. But Warhol is a huge fan of the franchise, growing up watching the films in the '80s and seeing new generations of fans come up through the years.

The festival has really taken off since its start seven years ago. "So far I haven’t seen anything like it, anywhere on social media," says Warhol. "I [have attracted] about 5,000 attendees every weekend for the last four years."

The cosplayers are always a huge draw. Warhol books an official Darth Vader and stormtrooper from the 501st Legion and guests are encouraged to come in costume. "The majority of people that come are Darth Vader or stormtroopers. They win every single time; always the dark side," says Warhol. "Even with the artwork." When two become one, the result is art by DeeJon (otherwise known as Houston artists Marjon F. Aucoin and Dandee Warhol).
Photo courtesy of the artists and May the 4th Art Festival
As for the art show itself, Warhol has lined up more than 100 emerging and established artists who will be exhibiting Star Wars-inspired artwork. There are plenty of familiar names (Catfish Perez, Cynthia Vela, Stäcy Smith) and also some new faces. "I didn’t expect it to get this big but I kind of owe it to Houston to do it every year. I’ve gotten a lot of submissions from artists I’ve never heard of. It's a pretty good vibe this year. I’m even getting submissions coming from outside Houston, too," says Warhol.

It's definitely recommended that avid collectors make it to the VIP preview opening party when bidding opens up; it's a chance to mingle with artists, see some great cosplay and jam to tunes by Night Drive DJ Brandon Duhon. That's followed by the two-day festival featuring returning vendors (who can display any type of art), perennial favorites Boombox Taco and Deep Eddy Vodka, and new sponsor Mineragua.

Oh, and if you see dozens of preschoolers shrieking with delight when they spot Warhol, it's probably his art students from the W.I.D.E. School in Missouri City. "The festival is free for kids. I want all my students to come for free; I want them to see what I do outside of work," says Warhol.

"If they do come to see my show, they say, 'Oh Mr. Dandee I can't wait to see your Star Wars show every year. I have to do it every year.'"

We expect those preschoolers will be receiving a letter from Disney's legal department very soon.

And here's a little sampling of the works of art on view during the 7th Annual May the 4th Art Festival: 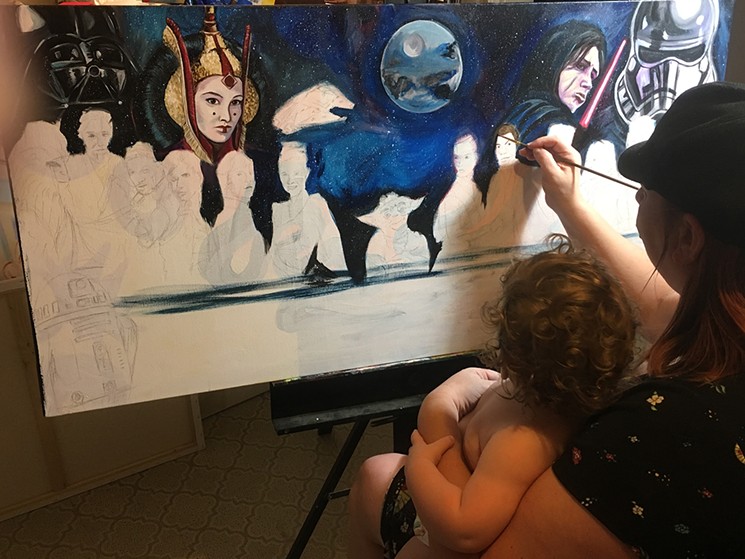 Stäcy Smith (shown with daughter Lyla) is finishing Rebel's Last Supper. Characters from episodes four, five and six are on the left and from episodes seven and eight on the right. Kylo Ren looks over his shoulder as his story is not yet over.
Photo by Travis McDonald
click to enlarge

(L) Art by Erin Tade, (center) art by Mark Nasso and (R) art by Ashlee Casey.
Photos courtesy of the artists and May the 4th Art Festival