The Great Society is "a Primal Play About the Human Ego" 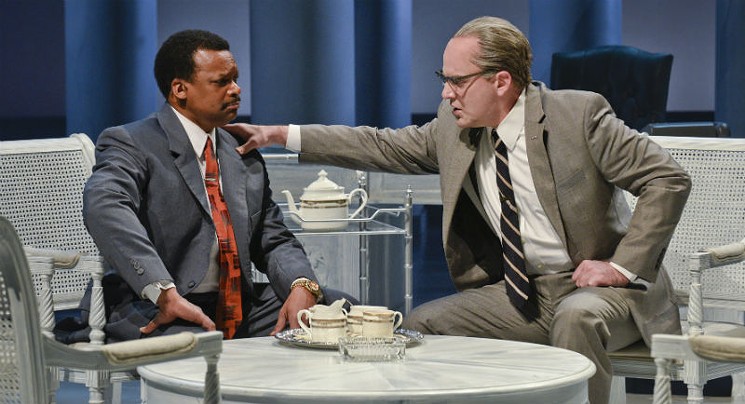 Shawn Hamilton (Martin Luther King Jr.) and Brandon Potter (LBJ) in the first installment, All the Way.
Photo by Karen Almond
For more than the last year, actor Shawn Hamilton has been playing Martin Luther King Jr. in various plays in theaters around the country. Houston audiences last saw him in that role in Robert Schenkkan's All the Way and now he is returning to the Alley Theatre stage to play the civil rights leader in the continuation of that story, The Great Society.

"It's a strange career track that I've fallen into lately," he said. "I've never been able to live in one character for a while. It's very comfortable. It's like a home now and to be able to explore so many different parts of King."

In The Great Society, the time period is not far removed from the first play. Lyndon Baines Johnson won re-election in 1964 and this show starts in 1965 after the inauguration. MLK will be assassinated in April 1968. "What you're dealing with now in 1965 to 1968 is a King who has the optimism of the star but the sheen has worn off, kind of like the space program," Hamilton says. "People have grown tired of the same old thing, King is having to stretch himself to keep people interested in the civil rights movement.

"He is also stretching himself to say it's not just enough to fight the racism in the South. I have to fight it in the North which means that he's going up against the same people who have supported him for so long. King more and more is becoming isolated by his moral stance."

During this time, Hamilton says, King was facing criticism from within his ranks as well as from outsiders.

"He has a vision for the country. In the first play it looked like there was optimism. It looked like the civil rights bill had passed; voting rights was right around the corner.  He finally had an ally in Lyndon Johnson in the White House who not only talked the talk but could walk the walk. Because Johnson knew how to manipulate and work the levers  of power in a way that Kennedy could not, being an eastern Democrat from Massachusetts."

So King had found a good partner, Hamilton says. "What killed it was the damn war. It sucked the blood out of everything. Johnson felt because he had such a manly posture he felt that he could not back out of Vietnam without looking weak."

The Alley is presenting this in a co-production with the Dallas Theater Center, and Dallas actor Brandon Potter returns to the role of LBJ.

Hamilton says the The second play you see less optimism but a very complex workings of politics and the country. It's almost like you see a snapshot of the moment the country turned and started becoming reactionary. Nixon came in."