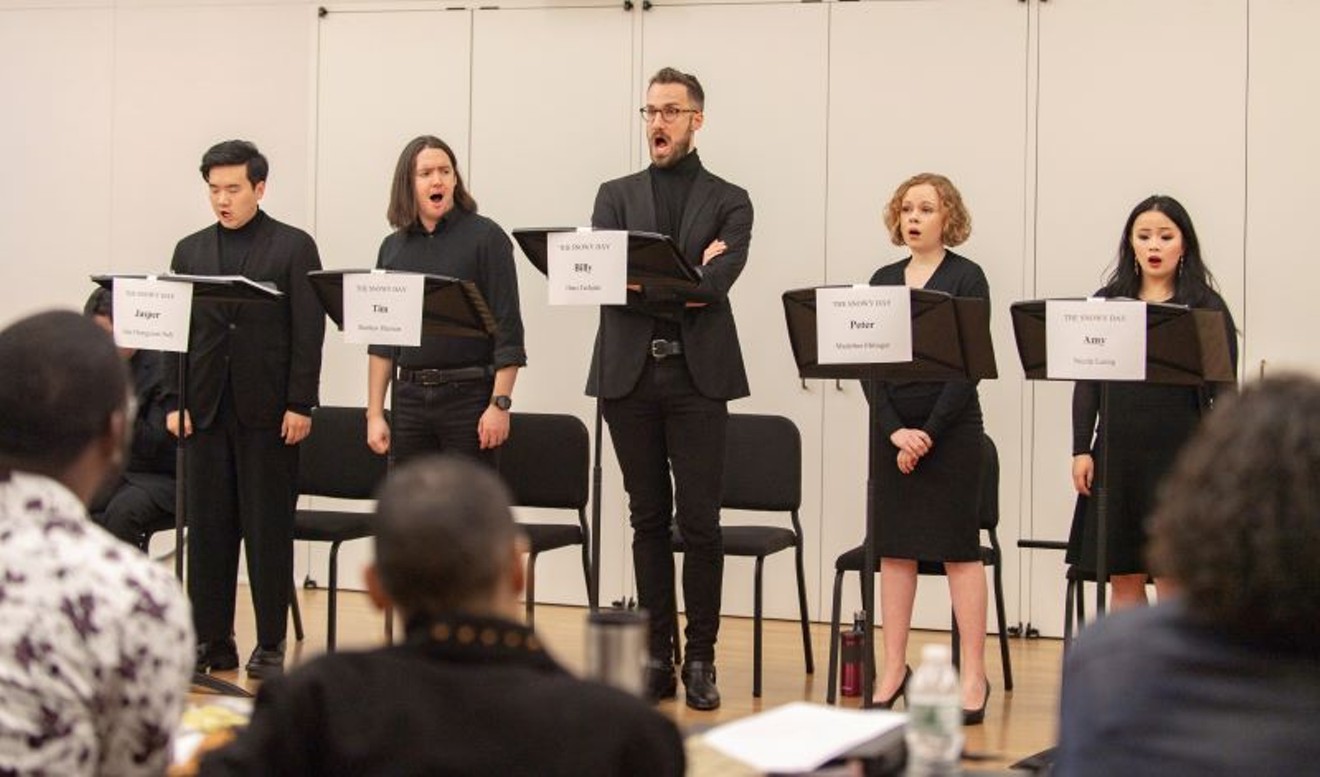 HGO in rehearsal for The Making of The Snowy Day. Photo by Matthew Fried
This December was to have been the Wortham Center premiere of an opera based upon the iconic children's book The Snowy Day that Ezra Jack Keats wrote almost 60 years ago and has been in demand ever since.

The story of an African American boy who goes out to explore his urban neighborhood after a fresh snowfall was first published in 1962. The book was groundbreaking in that it featured an African American — the young boy Peter — as the main character. Keats won the 1963 Caldecott Medal for the collage illustrations he employed.

The coronavirus disrupted Houston Grand Opera's plans to present the work, a collaboration between composer Joel Thompson and librettist Andrea Davis Pinkney. And now, instead of a live performance, what HGO is offering is an accompanying documentary that was made of the making of The Snowy Day.

Annalise Ophelian, is a documentarian based in San Francisco. Known for her work focusing on gender and racial justice issues, she embraced the chance to document how this production was being put together when HGO approached her at the end of the summer.

"I think there is something magical about imagining snowscapes in regions where that doesn't actually happen," she says. The book, a favorite of hers as a child, "offers a story of beauty assembled scrim upon which we can project the joys and concerns and resolutions of fears that we might experience in our day to day lives. Certainly The Snowy Day is a very open and sparse book. And I think that that sparseness in a way —and [HGO Artistic and Music Director] Patrick Summers describes it as a work of gentle philosophy — it invites us to bring ourselves to the story.

For some adult audience members it's nostalgic as well — a time when children could leave their homes and play for hours without adult supervision. At the same time, she says, it remains a new story for new audiences.

"The New York Public Library has listed The Snowy Day as its most checked-out library book in its 125 year history."

The documentary was  a parallel process to the production itself during a time when it is almost impossible to do art while being in the same room together, Ophelian says. By the time she came on she was not able to travel. Interviews were done by Zoom and by video.

"I sent out all of the AV kits to the participants, walked them through setting up cameras and microphones," she says. There was a workshop in Houston in mid-October. "I got to have a camera there for one day before the workshop had to be shut down."

A lot of independent filmmakers have been reinventing the wheel all year long, Ophelian says.

The resulting documentary "is an invitation to see not only how this opera was created, but the way we're creating in 2020 amid this pandemic.

"When things are challenging and difficult I think we turn to art as a way to understand our world with each other and to understand ourselves. Art and artists are resilient and we figure out a way to get it done."

And if you'd like a refresher course on the book, have a look here:

The Making of The Snowy Day: An Opera For All is scheduled for release Thursday, December 10 at 7:30 p.m. and will run through January 9, 2021. It can be accessed through Marquee TV an on-air streaming program. For more information, visit houstongrandopera.org. Free.
KEEP THE HOUSTON PRESS FREE... Since we started the Houston Press, it has been defined as the free, independent voice of Houston, and we'd like to keep it that way. With local media under siege, it's more important than ever for us to rally support behind funding our local journalism. You can help by participating in our "I Support" program, allowing us to keep offering readers access to our incisive coverage of local news, food and culture with no paywalls.
Make a one-time donation today for as little as $1.