The Marriage of Figaro at Houston Grand Opera 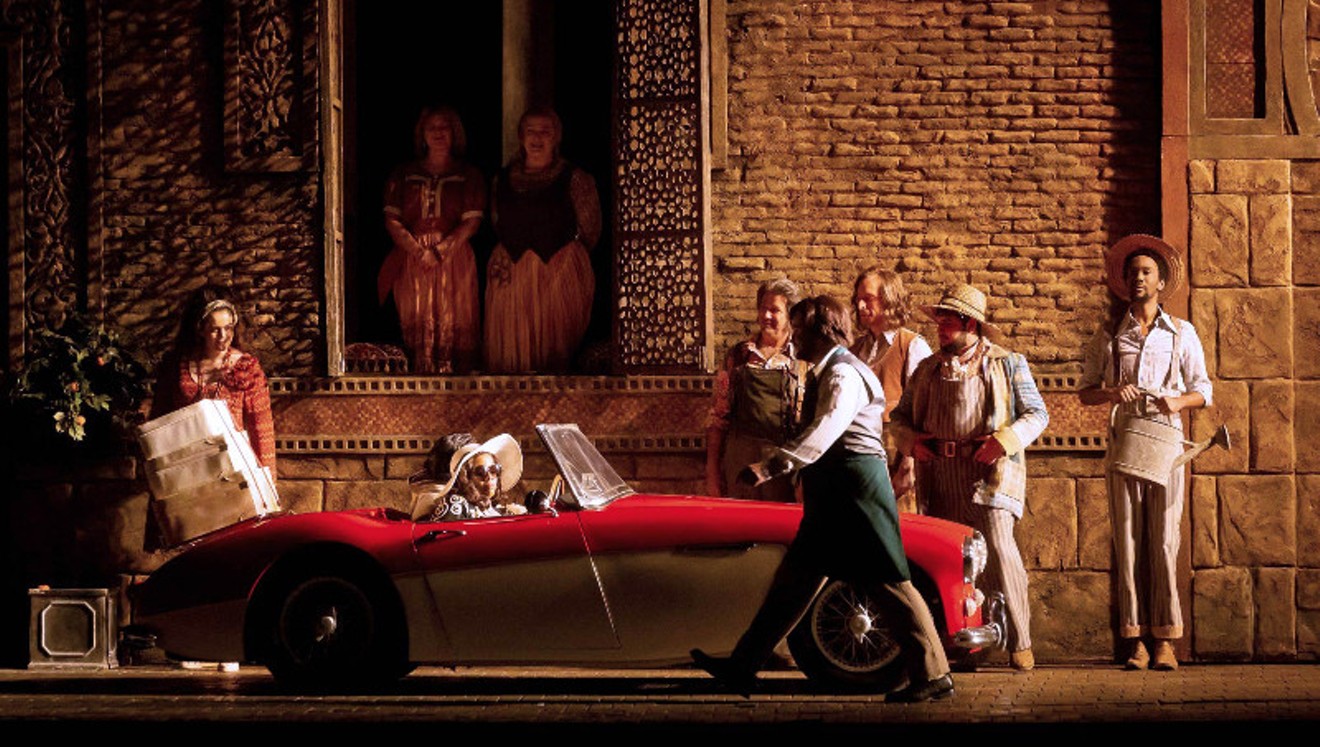 The Marriage of Figaro at Houston Grand Opera. Photo by Lynn Lane

As far as opera director Ian Rutherford is concerned, The Marriage of Figaro has "possibly the greatest Act II of opera and musical theater that was ever created and the greatest libretto ever written."

And he's bringing that conviction to life on stage when Houston Grand Opera once again presents a revitalized version of the comic opera with music by Mozart with book by Lorenzo Da Ponte.

The opera has been updated to a late '60s Spain - but "a mythical Spain" - as Rutherford is quick to point out. Having traveled to that country during that time period, he says, long hair on men was never allowed when Franco was in charge.

"The main reason why it’s placed in this time is to find a time where the master-servant relationship was still strong," Rutherford says. "The added frisson of droit du seigneur which gives the count the right to sleep with Susanna on the wedding night,  if you then align that with free love and everything seen as good and bad of the ‘60s and then you’ve got an interesting cocktail."

In the opera, servants Figaro (bass Nahuel Di Pierro) and Susanna (soprano Elena Villalón) want to get married and somehow avoid Count Almaviva's (bass-baritone Adam Plachetka) plans to assert his rights as lord of the manor to have sex with Susanna on her wedding night This is the same Count seen in The Barber of Serville, but he has changed from a romantic young man to a skirt-chasing lecher. Meanwhile the Countess (soprano Nicole Heaston) is aware of and not happy at all about her husband's adultery.  She and Susanna conspire together to waylay his plans.

Farce is a major ingredient in all this, as in time honored fashion, doors open and close bare seconds before someone would be detected. Hiding places abound, as do impersonations, longstanding grievances and undiscovered relationships.  All the while, the Count keeps postponing Figaro's wedding because he wants Susanna for himself.

Taking into account changing mores, the approach to Susanna's character pivoted a bit, Rutherford says.  "The voice of women across the world are heard ever more clearly and so as a director one needs to and wants to show a strong, intelligent, powerful woman," Rutherford says. "By updating it we can give context to situations all the more clearly and see Susanna's brilliance."

HGO Artistic and Music Director Patrick Summers conducts the four-act that with intermission runs about three and-a-half hours long. To carry this off, the opera — last seen in this revival version in Houston in 2016 — requires and has singers who can do more than just sing, Rutherford says.  "We’ve blessed with singers who have abilities as actors as much as they have enormous abilities as singers."

Asked about critics who don't like updating operas written much earlier in time, Rutherford responds: "I think that’s sad. What you're doing is denying everything that’s happened in the world and society from that point. And you’re denying the intelligence of the audience that have seen great films, great plays, great musicals.  I think it would be dull to present it as a museum piece."

And asked why this particular opera remains a mainstay in opera houses around the globe, Rutherford says there are many reasons but chief among them:  "Because of the complete excellence of Mozart. The music itself communicates directly with an audience. And you have a strong feeling of incredibly nuanced emotions gliding from one to the next as well. There are very few composers who’ve managed to do that with such facility.

His job as the director, he says, "is to create humanity, to create a vividness that makes one forget that this was written in the 1780s."

Performances are scheduled for January 13-28 at 7 p.m. Thursday, Fridays and Saturday; 2:30 p.m. Sunday January 15 and 2 p.m. Sunday January 22 at the Wortham Center, 501 Texas. For more information, call 713-546-0200 or visit houstongrandopera.org. $20-$210.
KEEP THE HOUSTON PRESS FREE... Since we started the Houston Press, it has been defined as the free, independent voice of Houston, and we'd like to keep it that way. With local media under siege, it's more important than ever for us to rally support behind funding our local journalism. You can help by participating in our "I Support" program, allowing us to keep offering readers access to our incisive coverage of local news, food and culture with no paywalls.
Make a one-time donation today for as little as $1.