It's Time For Stanton Welch's The Nutcracker Once Again Beckanne Sisk has danced many different Sugar Plum Fairy roles before. But, as the newest Principal dancer joining Houston Ballet said, "This is a very different version. Stanton's Skeleton of The Nutcracker is the same as many but he has added so much of his own and incorporated more of the story into his choreography."

Sisk who moved to Houston Ballet from Ballet West along with fiancé (and fellow Principal dancer) Chase O'Connell will be  performing in the most recent version of Houston Ballet's production of the classic ballet, the one choreographed by Stanton Welch and first presented in 2016.

Welch's version has all the traditional elements both realistic and whimsical complete with sword fights, the evil Mouse King, the Nutcracker that comes to life and a mammoth Christmas tree, all set to the memorable Tchaikovsky score. Welch's choreography features an expanded role for Clara, the young girl whose dreams set everything in motion.

Sixty one dancers will perform roles in this year's production as well as more than 300 young dancers will take turns filling the stage.

Asked why she made the move to Houston, Sisk said "I had only danced at Ballet West my entire career I started there when I was 17 years old. I guested here last season and I really enjoyed myself. The opportunity arose. I felt that if I wasn't to take the jump at this time in my career then  I would always wonder what if I tried somewhere else. I just wanted to experience another company and have myself pushed in a different way."

Before joining Ballet West, Sisk grew up in Longview where she trained with Longview Ballet Theatre. At 14 she went to The Rock School for Dance Education, a boarding school in Philadelphia - a real culture change. "That was tough," she said, and remembers thinking: "Oh, I want to be home with my friends in high school and be a cheerleader and on the drill team. It was so hard."

What kept her going were some great teachers as well as her desire to continue improving in dance, she said. In 2007 she won the Jerome Robbins Award. She performed in the Youth America Grand Prix and that was where Adam Sklute, Artistic Director of Ballet West, who was formerly  with The Joffrey Ballet as a dancer and associate director,, invited her to join Ballet West. She was 17 years old. After one year she moved up from Ballet West II to the main company in 2011 and became a Principal in 2015.

Asked why ballet rather than any other form of artistic expression, Sisk said: "I find the music has always drawn me. The classical beautiful music has been a huge draw. There's always something to work on. You can constantly consistently continue to make everything better." 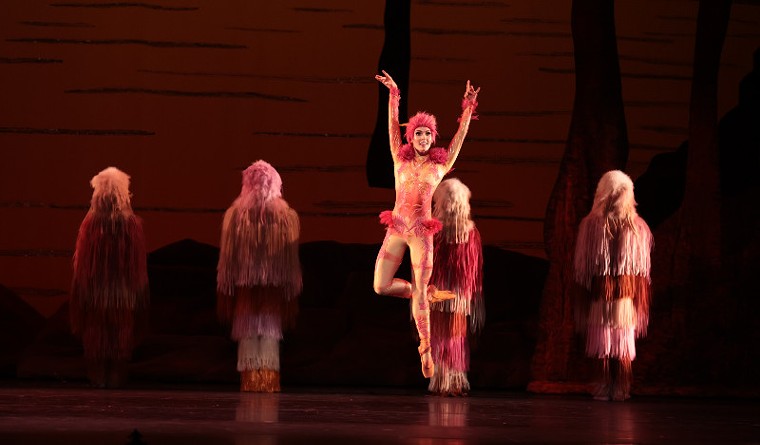 Houston Ballet Principal Beckanne Sisk with artists of Houston Ballet in Stanton Welch's Red Earth.
Photo by Lawrence Elizabeth Knox, Courtesy of Houston Ballet
As for why Houston, Sisk said: "I really, really enjoy Stanton’s choreography. The first ballet I did here was Red Earth. I loved the intensity; his partnering is so intricate. It's so difficult  but it's so rewarding.  His ballets in general are all very taxing and difficult but rewarding and they feel so good to dance."

The Nutcracker has remained a huge audience favorite and the Sugar Plum role a prize achievement for a dancer. As Sisk put it:  "Everyone knows this music. It's just a classic. So to able to dance and be the music as Sugar Plum, it's like I'll show you what the music looks like."

Performances are scheduled for November 25 through December 27 at 7:30 p.m. Tuesdays through Fridays, 6:30 p.m. Sundays, 1 p.m. Sundays and 2 p.m. Saturdays at the Wortham Center, 501 Texas. For more information, call  713-2272787 or visit houstonballet.org. $30-$200.
KEEP THE HOUSTON PRESS FREE... Since we started the Houston Press, it has been defined as the free, independent voice of Houston, and we'd like to keep it that way. With local media under siege, it's more important than ever for us to rally support behind funding our local journalism. You can help by participating in our "I Support" program, allowing us to keep offering readers access to our incisive coverage of local news, food and culture with no paywalls.
Make a one-time donation today for as little as $1.