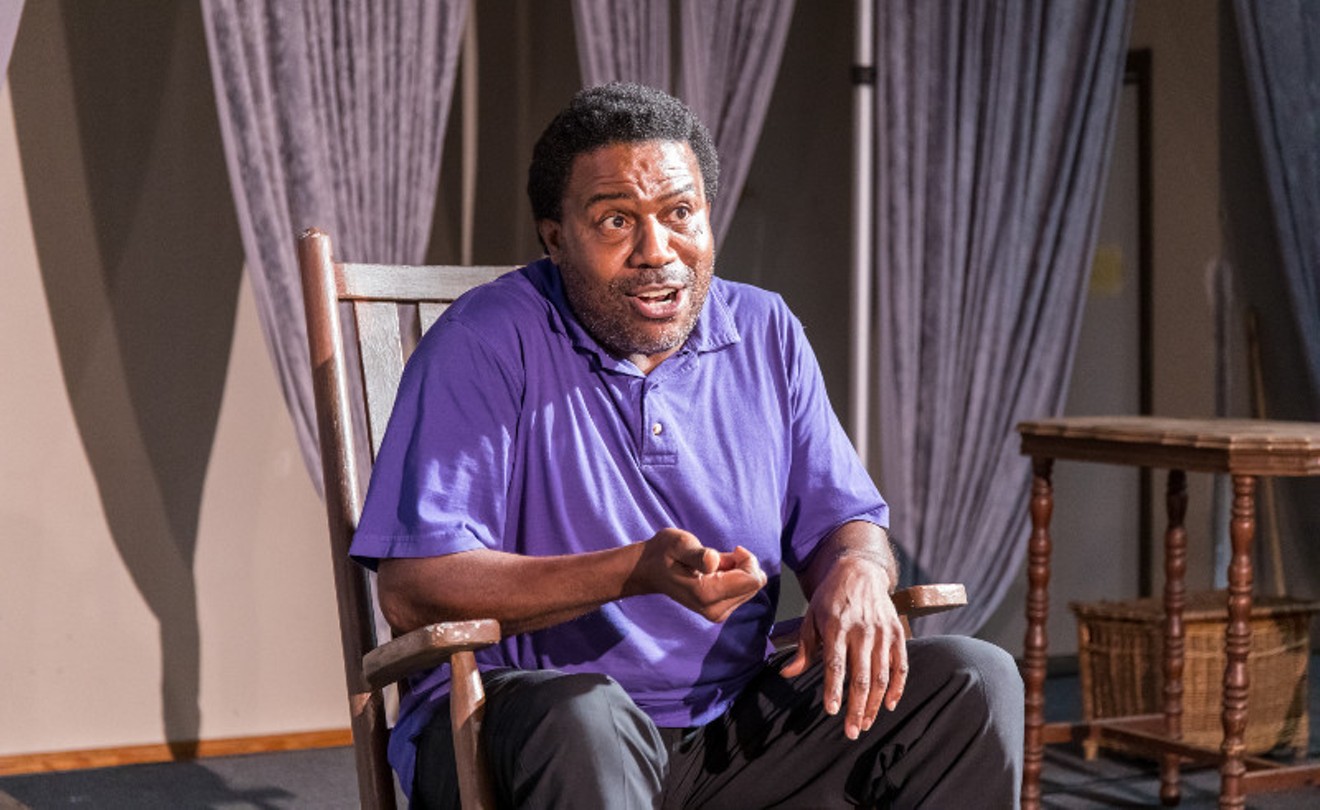 Jason Carmichael stars in the one-man show Tied. Photo by Christian Brown
Actor/playwright Crystal Rae was having lunch with another actor, bouncing ideas around, when he declared that what he needed was a one-man show and could she write him one. "I'd like to tell the story of being the father of one of the four little girls," actor Silvanus LaToison told her.

He was referring to the four young girls who died in 1963 when members of the Ku Klux Klan bombed the 16th Street Baptist Church in Birmingham. Fourteen others were injured.

"Of course actors, they want things fast. He needed it like in two weeks. I didn’t have it quite ready in that time," she says. "I was 'OK, I didn't make your deadline but can I keep working on it?' And he paid me $5 and I tried to give him his $5 back to keep the idea and he was like 'Crystal keep the $5 and keep the idea.'"

About a year later, she had something very close to completion and began sharpening her writing with workshops and readings at The Ensemble Theatre.

Now, in a joint venture between Houston's newest theater On the Verge Theatre and Houston's longtime Ensemble Theatre, Rae's honed vision is being produced in the one-man play Tied starring Jason Carmichael. As it turns out, LaToison in not in this production. "But he is the genesis of this production," Rae says.

The play starts in 1963, with the bombing and centers on David, a father who lost his youngest daughter in the attack. He's always been something of a straight arrow, but now his wife and surviving daughter are also threatened. As happened in real life, the culprits went free for years before finally being prosecuted for their actions (with the exception of one who died.)

Carmichael plays David, but takes on other personas during the play which will be seen in the black box theater at Ensemble. Bruce Lumpkin, co-artistic director of On the Verge (along with Ron Jones) is directing the one-act running about 90 minutes.

"In the storytelling Jason does a beautiful job of being his own daughters, he performs as his wife, he performs as the tempter and gives voice to all these characters," Rae says.

Although based on true events, Rae imagined what she thought a father in such a case would be thinking. Rae had had a vague awareness of what had happened in Birmingham while she was growing up but it was seeing the Spike Lee documentary on it while she was in college that "sealed it" for her.

"One of the problems brought up in the show is that the main character is sort of tempted by the devil to take care of it himself," Rae says, after the FBI and law enforcement weren't getting convictions of the men suspected of the crime. (The case was reopened in 1976 by Alabama Attorney General Bill Baxley  and the first conviction came the next year.)

But Rae's play is not just sadness piled upon sadness. The David character delves into the relationships he's had with his family and Carmichael projects a warm and endearing quality as he remembers good times with his daughters. she says. "Even though the topic is heavy, his handling of it is like everything you'd want out of playtime with a dad. I love that about his performance."

"I think I’m hoping to be a part of a movement of art that celebrates the beauty of being a father but also celebrates the beauty of being a team,  a family and working together," she says. "That would mean a lot to me if people left saying 'Oh, I saw them working, not clawing at each other' — feeling like there still stuff to do to work toward a justice system that is equal and kind to all of the people that it's supposed to serve. But also the ability of the Black man to survive but also to be resilient is something I cherish."

Rae, who had performed across the country and in film, also leads puppeteering workshops for incarcerated youths. She has a bachelor of fine arts degree from Abilene Christian University. She is a  middle school teacher in Cy-Fair ISD, teaching theater. A failed science class in high school redirected her  reams from being a doctor to theater, she says laughing. To date she has written four full length plays, several puppet shows and three one-person plays.

In Tied. Rae says she wanted to show that Black fathers are caring and responsible and protect their families. "I am hoping when Black men see it they feel supported and loved. I don't know that there's a lot of renderings on stage of Black men being thoughtful fathers and loving husbands and I hope that they feel like somebody is rooting for them in this show."

Performances are scheduled for September 29 through October 9 at 7:30 p.m. Fridays and Saturdays, 2 p.m. Saturdays and 3 p.m. Sundays at The Ensemble Theatre, 3535 Main. For more information, call 713-673-9565 or visit ontheverge.org. $35.
KEEP THE HOUSTON PRESS FREE... Since we started the Houston Press, it has been defined as the free, independent voice of Houston, and we'd like to keep it that way. With local media under siege, it's more important than ever for us to rally support behind funding our local journalism. You can help by participating in our "I Support" program, allowing us to keep offering readers access to our incisive coverage of local news, food and culture with no paywalls.
Make a one-time donation today for as little as $1.