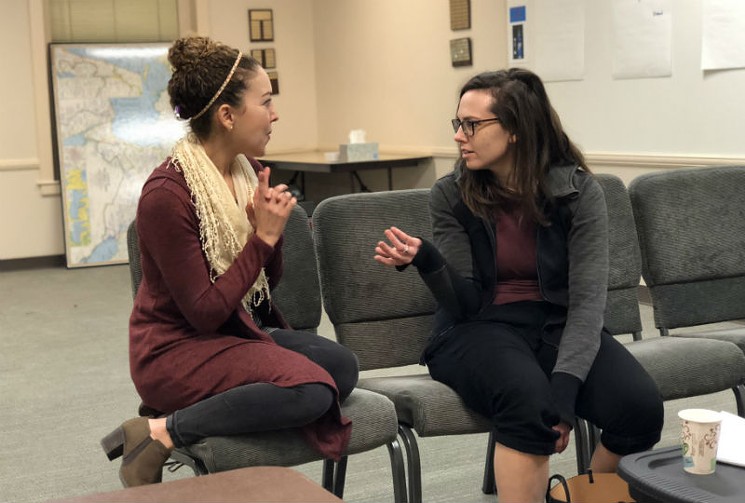 Lisa Villegas and Rachael Logue in rehearsal for Touch(ed) at Rogue Productions
Photo courtesy of Rogue Productions
Founded by co-artistic directors Rachael Logue and Chelsea Ryan McCurdy, Rogue Productions emerged with a bang on the Houston theater scene in 2016. Their inaugural production of Matt & Ben received Houston Theater Awards’ Best Actress nominations from the Houston Press for both Logue and McCurdy and their co-produced staged reading with 50 Playwrights Project of Karen Zacarías’ Just Like Us earned them a spot on the Houston Chronicle’s Best Theater Productions in Houston, 2017. Not to mention that Logue and McCurdy remain ever-present players in Houston theater. To put it simply, while still in its youth, Rogue Production is a company that Houston audiences should be taking seriously.

While Rogue’s future faced much uncertainty after their second production, Salzman and Cunningham’s Pride and Prejudice-inspired musical I Love You Because, was canceled because of complications due to Hurricane Harvey, the company has beaten the odds as they begin their second season with the Houston premiere of Bess Wohl’s Touch(ed) at Studio 101.

Bess Wohl, whose play Small Mouth Sounds won the 2016 Critics’ Pick from The New York Times, New York Magazine, and Time Out New York, is a Drama Desk Award Winner and the author of numerous plays including American Hero, Pretty Filthy, Cats Talk Back, In, Barcelona, and Touch(ed). Although Wohl’s work has been staged across the country, her plays are still relatively unknown to Houston, making Rogue’s production all the more significant.

Wohl’s 2010 play sheds light on mental health in an accessible way, through the lens of a family. Touch(ed) examines the breadth, confines, and oftentimes dangerous repercussions of familial love. As questions about mental health continue to remain a hot topic across the country, Rogue brings this important conversation to Houston audiences.

“This is a touchingly simple play that we hope to use as a platform to discuss and advocate for mental health in our community,” says Logue. Rogue is partnering with the Greater Houston Chapter of the National Alliance on Mental Illness (NAMI) to help create more a community-ingrained dialogue centered on the play. NAMI professionals will lead several talkbacks throughout the run of the show and NAMI staff and members will receive discounted tickets.

Mixing comedy and drama, Touch(ed) sheds light on the complex and contradicting world of mental illness. While Emma’s life may seem perfect, she’s also been struggling with mental illness for the past eight years, spending time in and out of psychiatric hospitals. To help her sister overcome her illness, Kay plans a week at a cabin in the woods to bring back the spirited sister she recalls from her youth. Kay hopes that a weekend away with friends and family, complete with board games and comfort food, will help bring Emma back to her vibrant self, something that her psychiatrists have failed to do. The cast includes Lisa Villegas as Kay, Logue as Emma, and John Gremillion as Billy, Kay’s fiancé, a struggling novelist. Touch(ed) questions which method is most effective: professional medical care or a more home-grown intuitive approach.

“When tackling a project like Touch(ed) that broaches the different sides of a very controversial coin, you have to approach the material with a reverence for both sides,” says McCurdy, who directs, adding, “The show touches on the relationships of three characters dealing with mental illness and it's many treatment options. It is my goal to allow the audience to identify with at least one, if not all of the characters as we journey through this topic together.”

Rogue Production’s mission is “to create accessible theatrical experiences that represent the diverse population of our city.” With Touch(ed), Logue and McCurdy build off of their previous work by expanding the dialogue about mental health and ability in Houston.

Trevor Boffone is a Spanish teacher at Bellaire High School and a lecturer in the Women’s, Gender & Sexuality Studies Program at the University of Houston. He also contributes to the Houston Press from time to time.
Contact: Trevor Boffone