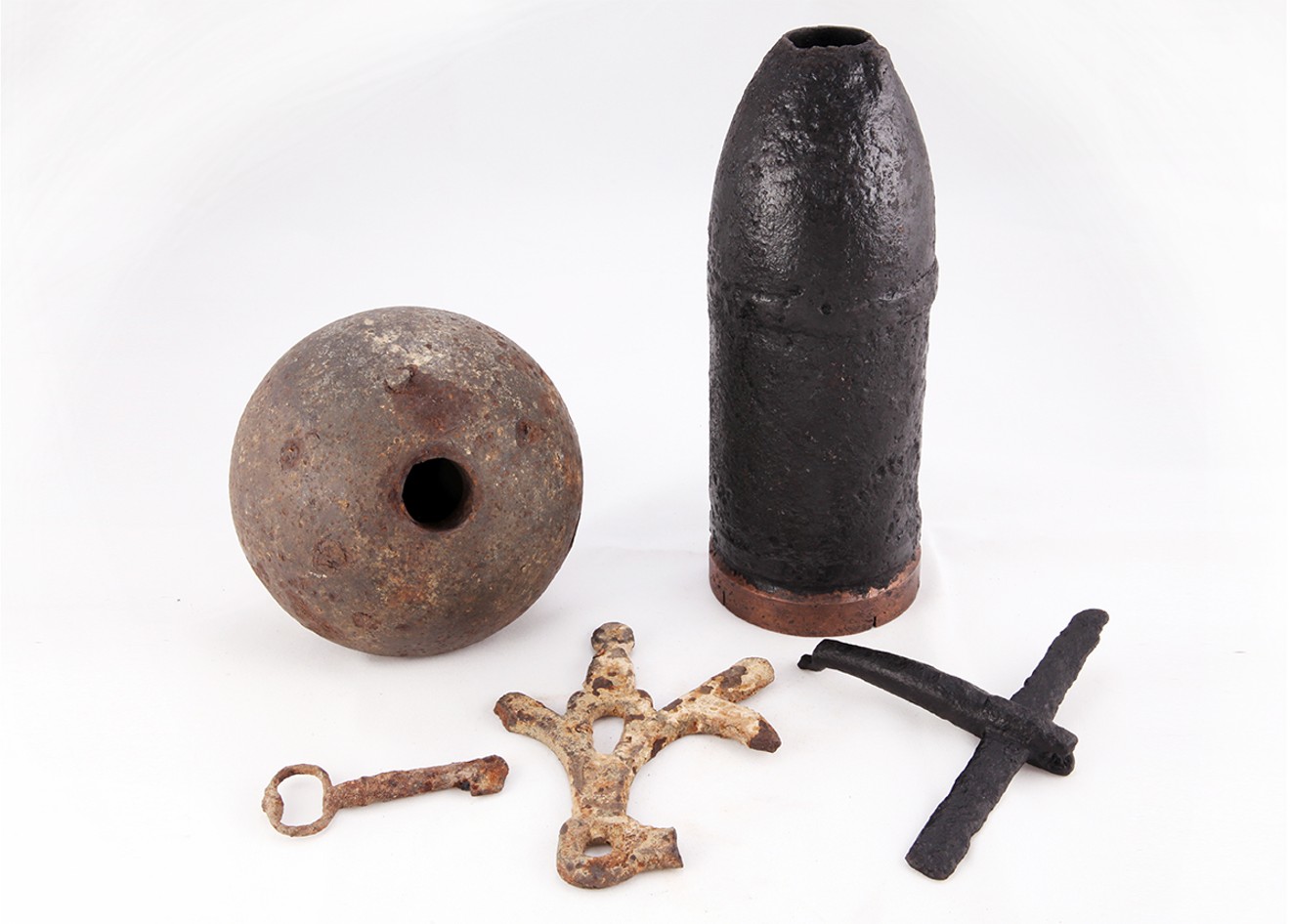 A new exhibit at The Heritage Society, "Dumped and Forgotten Below the Milam Street Bridge," explores Houston's role in the Civil War through munitions, artifacts and history. Photo courtesy of The Heritage Society
This story is more Cold Case Files than clickbait. Archaeologists really did find more than 1,000 Civil War era objects and munitions dumped into Buffalo Bayou under the Milam Street bridge.

The thing is, the objects were found in the 1960s and then seemingly disappeared. "In the archaeology community they were scratching their heads," says Ginger Berni, collections curator for The Heritage Society.

Berni describes that 1968 excavation as more "fly by the seat of your pants archaeology" and says that the Southwestern Historical Exploration Society did a quick analysis of the objects and gave them to the Houston Museum of Natural Science where they were stored until 1986 and then transferred to The Heritage Society.

Until Berni decided to do some digging into whatever that was in the closet.

"I wanted to know what these artifacts were. I thought they had a real story to tell," says Berni. "I worked with the Texas Historical Commission and the Houston Archaeological Society.

"The [society] was very excited to see these artifacts; no one knew where they went." Now society member and Texas A&M University graduate student Joshua Farrar is taking it a step further and making this his Ph.D. topic. Berni says he took the collection to A&M where they have a specialty lab and can properly clean and analyze the metal artifacts that had spent so much time underwater.

"When most people imagine Southern cities or Southern states in the Civil War they don’t think of Texas and certainly not Houston because there were no battles here, per se. But Houston was very much a part of Texas which did secede so we were a Confederate state," says Berni.

And it was war strategy that resulted in those rifles, cannon balls and munitions being thrown into our bayou. The Union forces were fast approaching so the Confederate army loaded barges with supplies and munitions and drove them up stream to the low water bridge and sunk them to deprive the enemy of those resources.

"The people of Houston knew that it was there. When you read the newspaper articles in the late 1800s and early 1900s, [it was reported]. The water in Buffalo Bayou would rise and fall, and when the water was low you would see it, ship parts sticking out of the water," says Berni. "People would venture out there and try to get the munitions as souvenirs. One man actually blew himself up in the early 1900s."

We'll learn more about that explosion victim and view about 600 of these objects in a new exhibit titled "Dumped and Forgotten Below the Milam Street Bridge."

Other stories include the tale of a woman who is buried here who posed as a man to fight in the war, the notorious Wharton/Baylor murder in downtown Houston, and a few surprises, too. Berni says they've curated all sorts of interesting objects in the exhibit, some borrowed, including a pair of dice used for cheating, a physician's kit (they've set up a makeshift hospital tent) and a Colt-style revolver made in Brazoria County in 1862.

It's also a chance to learn more about how slavery was a part of our city's history. "When they were ready to fortify Galveston they called folks who owned slaves and said, 'We need to rent your slaves; we need to rent your slaves immediately," says Berni. She says the exhibit will give people a a better understanding of urban slavery as opposed to the traditional thinking of plantation-style slavery. "There is a difference. And of course leading to Juneteenth which is a wonderful, now celebrated, historic event."

About two years ago The Heritage Society merged with 2015 MasterMind Award-winner Houston Arts & Media, and that partnership has resulted in last year's HAM Slice video about The Civil War in Houston.


"Dumped and Forgotten Below the Milam Street Bridge" opens May 16 and runs through August 18, 10 a.m. to 4 p.m. Tuesdays through Saturdays, The Heritage Society Museum Gallery, 1100 Bagby, 713-655-1912, heritagesociety.org, free.
KEEP THE HOUSTON PRESS FREE... Since we started the Houston Press, it has been defined as the free, independent voice of Houston, and we'd like to keep it that way. With local media under siege, it's more important than ever for us to rally support behind funding our local journalism. You can help by participating in our "I Support" program, allowing us to keep offering readers access to our incisive coverage of local news, food and culture with no paywalls.
Make a one-time donation today for as little as $1.