Werther: a Story of Unrequited Love at Houston Grand Opera 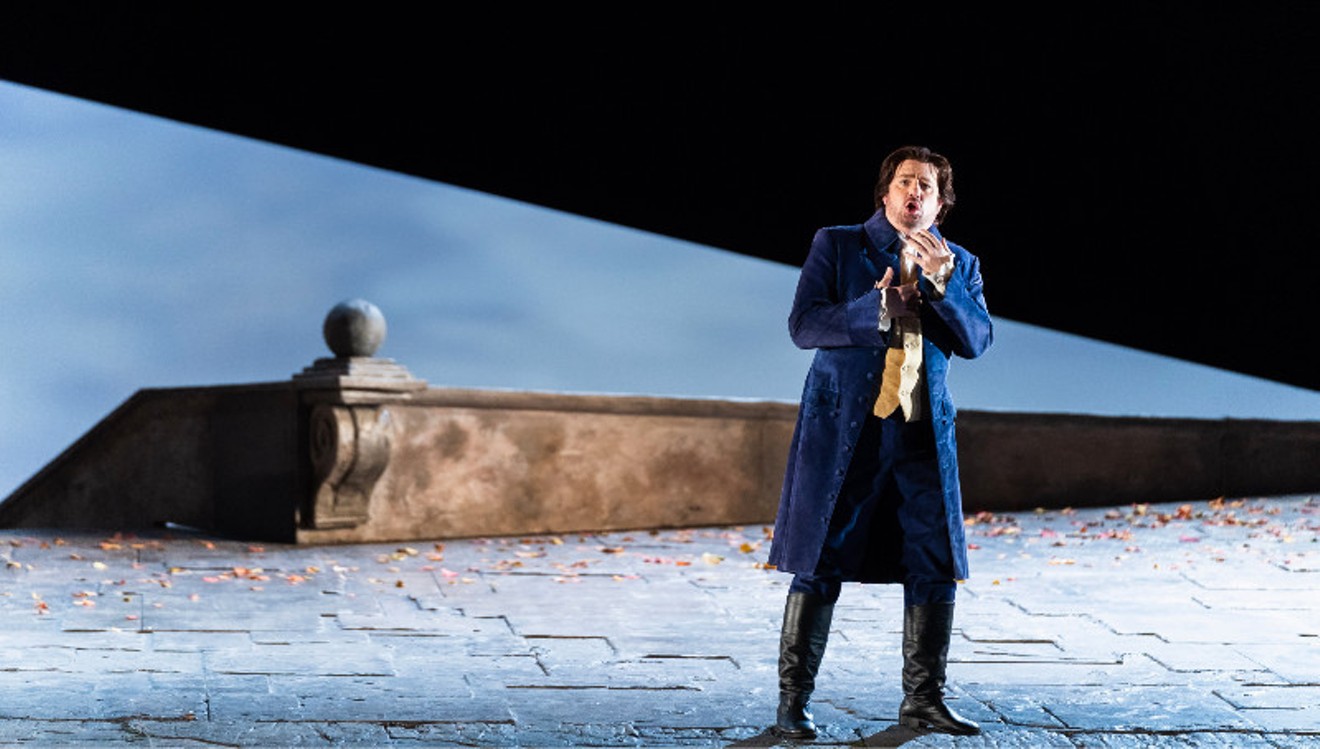 Matthew Polenzani in the title role in Werther at Houston Grand Opera. Photo by Michael Bishop

He loves her; she's already betrothed to someone else and holding to her promise to her mother to marry that man. Over four acts our title character's depression deepens while his frustration grows. She "might" love him but nothing can be done about it.

It's tragic opera about unrequited love and it hasn't been performed at Houston Grand Opera for 40 years. But starting this week, Werther by composer Jules Massenet (Manon)  is returning in a newish production with tenor Matthew Polenzani singing the role of the poet and his thwarted love.

Polenzani arrives with a great back story. Told while in the grad program at Yale that he would never be a great opera singer, that he would be able to get jobs at lower-level houses but that was about it, he has gone on to more than 300 performances at the Metropolitan Opera and has won the Richard Tucker Award and the Beverly Sills Award.

"Nobody ever said I wouldn't have a career as a singer. Just that my repertoire would likely be in lighter [operas] and  Rossini and Mozart only and probably never in a big opera house," Polenzani said. "I heard those words but I didn't necessarily agree with them. But what did I know? I was told that when I was 23 or 24  I'm not even sure if at that point I'd even decided I wanted to try to be a singer."

But he persevered, studying with the help of personal tutors while he better determined what his voice could do. And, as with many opera singers, his voice has grown naturally over the course of his career. "In 1997, when I started at the Met if you'd said to me in 2022 they're going to put a new production of one of Verdi's greatest operas, Don Carlo, on for you, it would have seemed like a long shot at that point."

HGO has asked for him several times, but Polenzani said it never worked out with his schedule. Now that has changed and he is making his Houston debut in this co-production by Opera de Paris and Royal Opera House, "I really love this piece," he says of the opera based on Goethe’s The Sorrows of Young Werther.

In fact, debuts abound in this Werther-in-Houston production beginning with French director Benoît Jacquot's 2004 take on the opera which originally premiered in 1892. Other debuts include: three-time Grammy Award-winning mezzo-soprano Isabel Leonard singing the role of Charlotte, the object of Werther's affections; soprano Jasmine Habersham  as Charlotte’s sister Sophie; and baritone Sean Michael Plumb as Albert, the man Charlotte marries.

"The story is very appealing. I do find that I have an affinity for this character," Polenzani says. "I love how he loves completely. I love him for his failings as a human being. I love him that he admires Charlotte's devotion not just to God but to her mother and to her parents and to Albert."

"Obviously the story ends poorly for Werther. That is something we're stuck with in this story by Goethe. Is there hope in it? Yes in a way. He chooses the most extreme measure in order to get Charlotte to him to admit to him that she loves him. And yeah, he went too far. But before the lights blink out for him he hears her say to him that she loves him  and it’s really all he needs and all he wants. and it's too bad it went the way it did but it's not a new story and it's not a new story today either. These kinds of things are still happening."

So is an opera written in the late 1800s relatable to modern audiences?

"Anybody has ever been in love will get this. At least in our culture we don’t see much of things that are like arranged marriages. This marriage was — I don't know that it was exactly arranged — but there's no question that her mother on her deathbed said you should marry Albert. And this is what she does.

"She does love Werther. There’s spark that's there, a chemical spark between them that exists. She is devout enough and faithful enough to hold onto when she’s feeling weak. It’s a love story even if the love story ends poorly. I think anybody who's ever loved anyone would be able to be able to put themselves in these shoes."

Besides the story, Werther has some beautiful music, he says.

"It is a great piece of music, an easy story to grasp. easy music to listen to and understand.  It’s every bit as appealing as Carmen which maybe you could argue would be the most famous French opera. there aren’t any hit tunes in it per se,  but it is jammed with beautiful music and people struggling to figure out how to keep going and these are things we can relate to.

"I think that we have a really terrific cast and I think every bit as great as the cast that sang 40 plus years ago. It's a beautiful, stylized production. And worth your time. It's a real masterpiece. It's full from beginning to end of emotion and drama and heartbreak and heartache but love. I think it’ll be worth your time  to come and have a look."

Performances are scheduled for January 27 through February 10 at 7:30 p.m. Fridays, Saturday and Wednesday and 2 p.m. Sunday at the Wortham Center, 501 Texas. Sung in French with surtitles. For more information, call 713-228-6737 or visit huostongrandopera.org. $20-$210.
KEEP THE HOUSTON PRESS FREE... Since we started the Houston Press, it has been defined as the free, independent voice of Houston, and we'd like to keep it that way. With local media under siege, it's more important than ever for us to rally support behind funding our local journalism. You can help by participating in our "I Support" program, allowing us to keep offering readers access to our incisive coverage of local news, food and culture with no paywalls.
Make a one-time donation today for as little as $1.