Putting the B In LGBT: James Park Doesn’t Let Labels Get In The Way 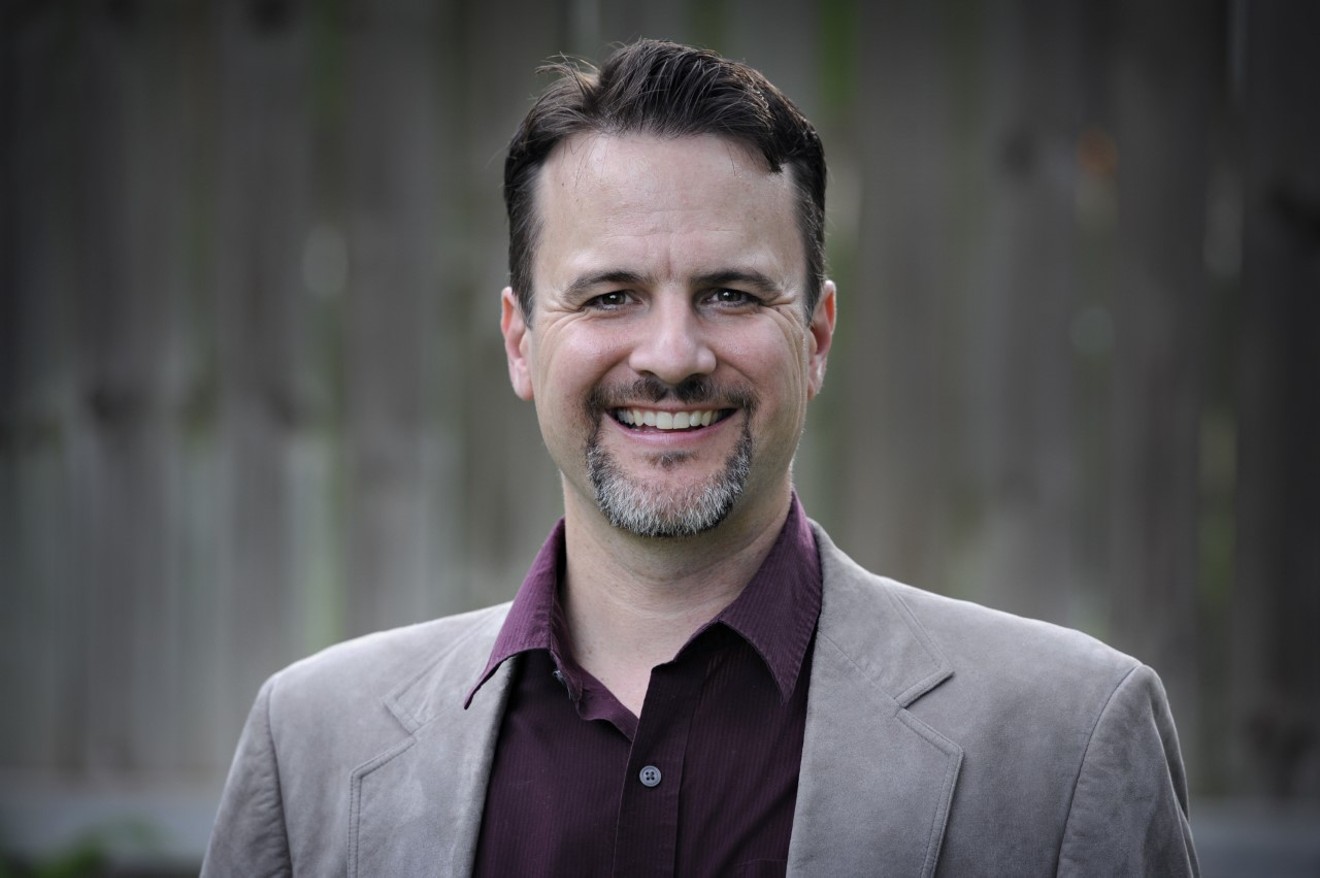 James Park's understanding of his own sexuality has helped him to relate to family members and students. Photo by Kelly Hearn
June is the anniversary of the Stonewall riots, often regarded as the tipping point in the modern gay rights movement and earning its recognition as Pride Month. Houston Press met with members of the LGBTQ community to learn more about their experiences belonging to this group. These are their stories.

According to statistics, the most prevalent letter in the LGBTQ acronym should be the bisexual community. That group, however, tends to be neglected – erased almost – in the community. Perhaps it’s a thought that bisexuality is just a pitstop before going gay or lesbian. Or that it’s just a trend. But for James Park, being bisexual is who he’s always been.

“I always realized on some level that I’m bisexual. Admitting what it was took more time. In hindsight, you can always see things you didn’t see in the moment. I came to terms with my sexuality in college. I was always interested in women and had girlfriends, but being in the music school allowed me to explore other sides of myself. It was an accepting atmosphere. That’s when I came to terms with my attraction to men as well,” Park said.

His college years were a time when he was actively dating both men and women, and his newfound realization about his attractions was met with mixed reactions.

“One of the tropes for bisexual people is that they can’t commit to a relationship. It’s not an insatiable need to be with both genders. It’s about the possibility to be attracted to anyone. That doesn’t change once you have found a person. For those whom monogamy is important, you’re choosing a person and not a side…an identity, not a gender. You want to travel through life with them. That doesn’t change if you're gay, lesbian, straight, pansexual or omnisexual. For people who want to be monogamous, you can still have that and be bisexual. Bisexuality is just the opportunity to be attracted to anyone,” he described.

Some of his love interests couldn’t handle Park’s sexuality despite his best efforts to assuage any fears or doubts. If the person he was dating would claim that it wasn’t an issue, inevitably it somehow always turned into an issue. That is, until he met the person who would one day become his spouse.

“I was very open with my spouse from the very beginning when we first started dating. One of the signs that told me she was the one is that she accepted my sexuality from the beginning. I hadn’t had a partner who wasn’t threatened by my attraction to the other gender. She was fine with it and accepted me. We’ve been married for 20 years now.”

Even though Park came out as bisexual to his spouse, he still never came out to the world.

“I never saw a need to come out publicly. If you needed to know, you knew,” he said succinctly.

That all changed two years ago when Park decided to come out as bisexual in effort to live a more authentic life.

“A big reason [I took so long to come out] was that I was in a stable relationship, and I didn’t see why it mattered to anyone. It wasn’t an issue for the longest time, but I got to a point where I realized I wasn’t living authentically. A close family member of mine was displaying some pride material and was guarded around me by what it meant. When I was told it was a pansexual pride emblem, my heart broke because my spouse and I have worked hard to create an inclusive atmosphere with our family,” Park said. “I don’t know what that barrier was. It might not have been shame, but it was a wall that was put up. That’s when I realized that my not living authentically had created a barrier with one of the people I love the most.”

That’s what changed the game for Park.

“I’ve been out to myself for 20-plus years, so as I started to think about that, a lot of things clicked into place. I thought a lot about bisexual erasure. I had erased my identity, and I wasn’t living authentically, and I didn’t like the way any of that felt. So I came out publicly and said, ‘This is who I am and have always been. I’m not going to erase myself anymore. We’re normal. We’re here,’” he added. “One of the things is how easy it is to get wrapped up in the relationships and you're only seen in the light of that relationship instead of the colorful and complex individual you are. I’ve been living out and proud since. I didn’t know if my family member wants to be out or is still figuring it out, so I lead by example. If you are part of the LGBTQ community, you can be proud about who you are and celebrate who you are.” 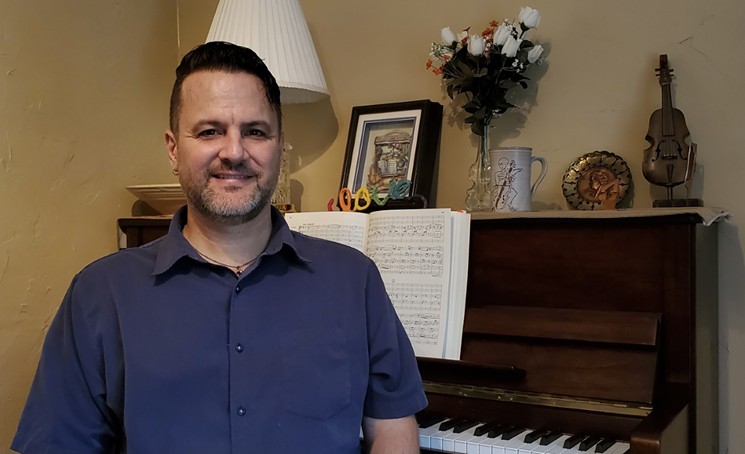 James Park teaches high school choir, where he has found his students have benefitted from his inclusive and welcoming classroom.
Photo by Audrey Park
As Park created a safe space for himself to live his authentic life within his family, he adopted that same attitude for his workplace as a choir teacher in the Greater Houston area. The results speak volumes.

“I am humbled and honored. I know that I have had an influence on students because I’ve seen it happen before my eyes. I have an advantage over other teachers because my students chose to take choir. It’s one of those activities where we get in touch with emotions and dive into what makes us human. That topic can open things up for people. To achieve high art, we have to achieve an atmosphere of high trust, and we have to create that atmosphere to explore the emotional quotient of each person in order to explore that art. We all explore humanity together,” Park said.

As a result of working in that team atmosphere and touching on emotions, the students grow to appreciate each other, collaborate, and lean on each other to create art. That creates trust and acceptance, and as a result the classmates celebrate each other.

“A foundation of my classroom is that we celebrate each other for who we are. Over the years, that has allowed students to come to me and feel they can talk about whatever issue is troubling them. Many times, a student has come out to me. I always celebrate and applaud them, and I make sure I genuinely am excited for their proclaiming who they are,” Park mentioned.

In addition to teaching choir, Park is also the faculty sponsor for the Gay Straight Alliance at his school. It was founded by a transgender student who was also a member of the choir, and his story is one of Park’s favorite memories.

“He joined the choir during freshman year and stayed with it through sophomore year. Over those years, it was coincidental that there was discussion in the Texas Music Educators Association to use more gender inclusive language. The University Interscholastic League was also having discussions about that as well. There was movement on the state level to be more inclusive in our language. For example, they suggested labeling the traditional women’s choir as a treble clef choir and the men’s choirs as bass clef choirs. These were changes to reflect a modern world,” Park said. ““It wasn’t but a few weeks later that this same student said he was not going to take choir anymore, but now he wanted to be in the choir again because of the new name and approach to acceptance. It was a great moment where we changed our approach out of precaution, and the results came to fruition right there in the classroom. The name change was really important to him.”

Park thinks that the changes in the classroom are a reflection of society and our overall understanding of human sexuality.

“As I have learned more about sexuality and where trends and science are pointing toward, I see that we live in a great time of exploration into what sexuality and gender really are. We’re discovering all these things that are fascinating. My classroom 20 years ago looks nothing like my classroom today. It’s always been inclusive, but that has changed as we learn who people are and how people are put together," he said. "Twenty years from now, that might look completely different, but we’re trying to do everything we can to be inclusive where people can be themselves and can be celebrated. Hopefully in the future, we won’t have to have a coming out…all of this is just normal. The things that we’re doing today hopefully will lead to that better world.”
KEEP THE HOUSTON PRESS FREE... Since we started the Houston Press, it has been defined as the free, independent voice of Houston, and we'd like to keep it that way. With local media under siege, it's more important than ever for us to rally support behind funding our local journalism. You can help by participating in our "I Support" program, allowing us to keep offering readers access to our incisive coverage of local news, food and culture with no paywalls.
Make a one-time donation today for as little as $1.