Putting the T And Q in LBGTQ: Love Knows No Bounds Nothing stops true love. Photo by Vegas Weddings Photography
June is the anniversary of the Stonewall riots, often regarded as the tipping point in the modern gay rights movement and earning its recognition as Pride Month. Houston Press met with members of the LGBTQ community to learn more about their experiences belonging to this group. These are their stories.

Move over Romeo and Juliet. Julianne McBride and Frank Atchley represent the modern-day storybook relationship (minus the grisly ending), and they’re putting their queer spin on it. This couple might look like your average newlyweds by day, but their whirlwind romance is anything short of spectacular.

McBride grew up in Deer Park, where she got involved in theater at only four years old. Through that, she said she was “surrounded by every flavor person there was. I feel like theater really brings in a collective group of people, but it wasn’t okay to be out and open where I’m from. In Deer Park, no one ever voiced out loud that you can't be gay, but you could feel the vibe, and I was really scared to be who I was.”

After finishing high school, McBride attended Sam Houston State University to attend its theater program. Once she was away from Deer Park, that’s when she started to allow herself to express who she really is, and she dove in headfirst.

“That was a fun time. I was like, ‘Oh yes, I'm bisexual. I like men, and I like women.’ Then, I happened to date a transgender man, which made me realize that I'm pansexual. For the first time, I felt very comfortable and safe, and I knew I belonged,” she said. Nowadays, McBride identifies mostly with the term “queer,” as it tends to encompass many different forms of attraction and love.

Meanwhile, during that same time, Frank Atchley was going through a change of his own.

“I explored my sexuality a little bit, but I couldn't quite figure out what it was for the longest time. Then, I heard the term ‘transgender’ and thought, ‘What is this about?’ My friend explained it to me, and the more they explained it, it all started to make sense,” Atchley said. “I've never really felt comfortable with how my body looked or my clothes, and I thought maybe it was the insecurity that everybody has growing up. I realized it was because that's not who I was. In 2016, I went through the process of getting my name changed and getting my gender marker [on my ID] changed.”

Frank Atchley is stylin' and profilin'.
Photo by Shawn Forney
Atchley started taking testosterone in 2020, which was another big step in his transition process. He added, “I feel a lot more comfortable now that I’m on testosterone. My voice, my face and some other features better reflect how I feel on the inside,” he added.

It wasn’t until 2022 when these star-crossed lovers would actually meet – albeit in a quirky way that even Shakespeare couldn’t have dreamt of. McBride performs as an AFAB (assigned female at birth) drag queen, meaning she is a cis-gender woman who presents female illusions, including the makeup, wigs, costumes, etc. Appearing as her alter ego, Phoebe Seymour (a play on Little Shop of Horror’s famous “Feed me, Seymour” line), she was performing at the Montrose watering hole BUDDY’S, the same place Atchley worked.

He remembers seeing her and saying to his friend, “'I'm going to marry her.' [Even though I] saw how insanely talented and beautiful she was, and I thought she was way out of my league.”

McBride, however, had mutual feelings, but neither one was brave enough to make the first move. Yet, McBride’s drag mother, Iris Seymour, was not going to let this potential tryst devolve into a missed connection. The elder Seymour spilled the beans about McBride’s crush, which led to Atchley’s eventual asking her on a date. 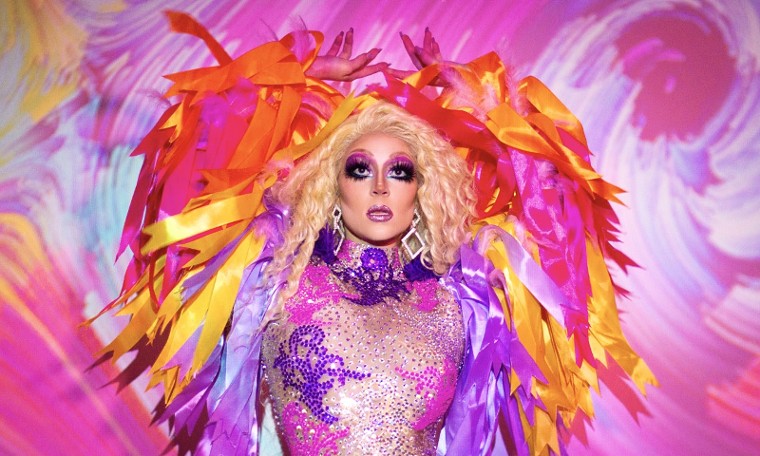 Phoebe Seymour shows off her signature subtle style.
Photo by Gavin Calais
Atchley asked McBride to get together for drinks. McBride – still in drag – asked if he would even recognize her without her stage makeup and accoutrements. It turns out, he would not recognize her.

“The time for our date came, and I walked in as my regular self. He didn't even recognize me,” McBride recalled. But that didn’t stop the lovebirds. She said they have spent every day together since then.

Atchley added, “From there, it's been amazing. We started officially dating maybe two weeks later. I asked her if she wanted to marry me maybe three weeks after that, and then we got married on May 17.”

Now that the couple is happily married, they’re still continuing to pursue their goals. For Atchley, that means taking the national registry exam to become an emergency medical technician. He also hopes to finish an associate’s degree for paramedic sciences. McBride is still performing in drag shows and is starting to make music. Her most recent song, “Cherries On Top” (under the name Elysa McBride) is on Spotify and is inspired by her husband.

Both McBride and Atchley agree: As for matters of the heart, when you know, you know.
KEEP THE HOUSTON PRESS FREE... Since we started the Houston Press, it has been defined as the free, independent voice of Houston, and we'd like to keep it that way. With local media under siege, it's more important than ever for us to rally support behind funding our local journalism. You can help by participating in our "I Support" program, allowing us to keep offering readers access to our incisive coverage of local news, food and culture with no paywalls.
Make a one-time donation today for as little as $1.