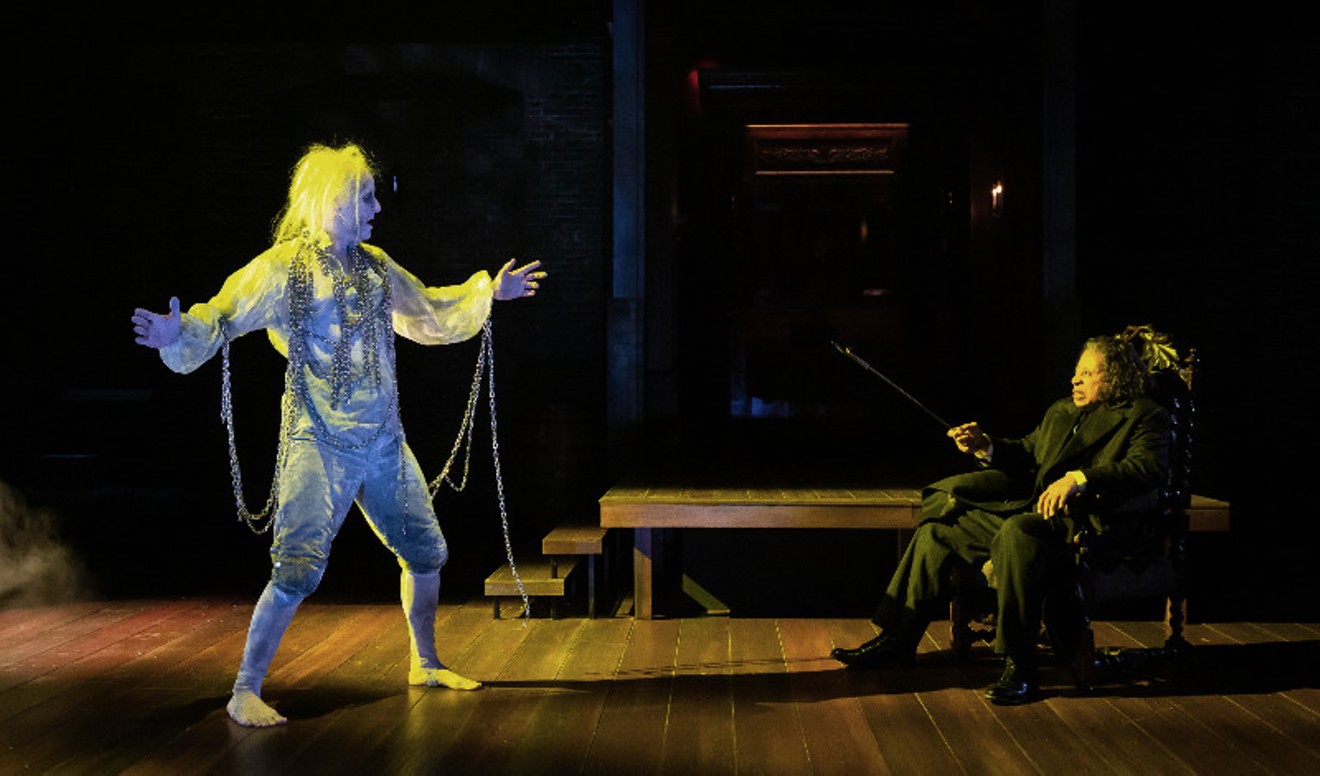 Chris Hutchison as Marley and David Rainey as Scrooge in Rob Melrose's new adaptation of Dickens' A Christmas Carol. Photo by Lynn Lane

Dickens 2.0
The Alley Theatre now has A Christmas Carol to be proud of. It is Broadway worthy.

Using as much of Charles Dickens' text that can fit within a running time of two hours, and employing a phalanx of theatrical chicanery – miniature houses (adoringly designed by Michael Locher) , glowing Empire-waist dresses hanging from the rafters, a colorful but brief puppet show (designed by Afsaneh Aayani) for young Ebenezer, trapdoors for surprising reveals, a living door knocker (all illusions by master designer Jim Steinmeyer), a gloriously ghostly Marley pawing out of a fireplace, three superb Christmas spirits of Past, Present, and Yet to Come, and an agile company who throws itself into this iconic Victorian saga – this adaptation by artistic director Rob Melrose is Christmas for the ages.

It is a holiday delight from every angle. Whether the young ones will be so enthralled is up for debate. Dickens' writing is awfully weighty and thick, like fine goose gravy, and his novella is awash in word constructions not often heard anymore, if heard before, and it can be tough sledding for little ears. Then again, the smooth direction and simple plot might just be enough to make sense of his knotty prose. Some little ones around me seemed mighty pleased at what they saw, so my concern may be false.

The adults near me had a lovely time. Some, I think, were surprised at the turn of events, and it seemed as if they might have been watching Carol for the first time. With the story's universal appeal – Carol is its own brand and has been seared into our consciousness since its phenomenal debut in 1843 – is it possible that some folks don't know it? So much the better that they learn of it at the Alley, for there's not much of the “ghost story of Christmas” that's missing on stage. It is prime Dickens: good, thick, and rich.

What's a Christmas Carol without that pinching, wheezing, covetous old oyster Scrooge? David Rainey has found a solid foothold on him. Yes, he blusters and bellows, he is cantankerous, and mean as hell, scaring little children, dismissing human kindness as a weakness. It pains him to smile. But when Marley, then the Spirits, descend upon him, his defenses begin to crack. Little by little he opens his heart. The plight of Tiny Tim finally shakes him awake, and Rainey does a little dance that is pure pleasure to watch. Scrooge has been reclaimed. It's a transformation, a miracle, a Christmas message writ large.

The cast is flawless, as they play multiple roles in this extravagant pageant, but four must be named. Chris Hutchison, as Marley, once dead as a door nail, resurrects as shrieking bellwether to Scrooge, warning him of his damnation if he doesn't atone. Shimmering as if transparent in costumer Raquel Barreto's ghastly pale shreds, he rants his alarms as they echo throughout the theater. Even though he doesn't materialize through the locked door as in the original, arriving by fireplace as if spit out of hell is a grand spooky image.

Then there's Todd Waite, first as gay Fezziwig, all good spirits and cheer for the holidays with slight Scottish burr, then as sleazy pawnshop denizen Old Joe, replete with catarrh cough as he claws through Scrooge's purloined clothes with avarice to spare.

And then, wonder of wonders, there's Shawn Hamilton as the roaringly rambunctious Spirit of Christmas Present. Dressed in emerald great coat and sporting a type of dreadlocks, he's half-Rastafarian, half-otherwordly, and radiates immense good will until he exposes Want and Ignorance from beneath his luxurious robes to teach Scrooge a lesson in humility.

The Ghost of Christmas Yet to Come remains unnamed in the Playbill, but it's a beaut of a part. Somehow appearing from the side of Scrooge's bed – another wondrous Steinmeyer special effects – this shrouded giant all in black is a terrifying apparition. Silent, he is death personified. He's quite a character, and very much picture perfect in pure Dickens mode.

Director Melrose allows the entire production to dance. The flow is beautiful, abetted by turning all the cast into Dickens' omniscient narrator. Someone may start a description, turn away, and somebody else will finish it. Fluid and seamless is the telling.

We've been awaiting a new Alley version of this immortal tale for years. It has arrived and it is glorious. What a present this time of year, full of love, hope, charity, and best of all, chock to the brim with Charles Dickens. Merry Christmas, every one.

A Christmas Carol continues through December 30 at Alley Theatre, 615 Texas. Performances are scheduled at varied times including 7 p.m. Tuesdays through Saturdays, 1 p.m. and 6 p.m. Sundays and also 2 p.m. Saturdays. For more information call 713-220-5700 or visit alleytheatre.org. $26-$121. 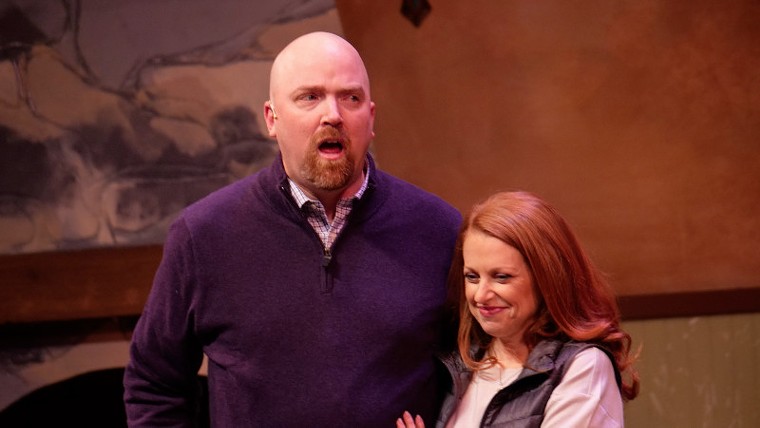 Kevin Crouch as Hugo and Kara Greenberg as Ginny in A Texas Carol at A.D. Players.
Photo by Jesse GrothOlson
A Sugar Plum Indeed

Can a Christmas play be described as a sugar plum? Sure, when it's written with heart, warmth, crisp repartee, and an inbred sweetness. Jayme McGhan and Kevin Dean's A Texas Carol at A.D. Players has all of this. McGhan and Dean, the theater's Executive Artistic Director and Artistic Producer, know their audience and the Christmas spirit. Their world premiere comedy is a lovely new present under the tree for the holidays, and may become a staple among the numerous adaptations of Dickens, Tchaikovsky, and Gunderson and Malcom (see Part I).

This is a Texas play, through and through, a light look at family dysfunction with the slight tang of barbecue rub. We're at Mee-Maw's ranch where the Dinkel family gathers each year to celebrate Christmas with their beloved grandmother. All the standard plot points used in a holiday play are activated: a family at odds, messy divorces, the cranky uncle, young ones at odds with the old ones, shades of immortality, good and abundant food, hints of goodwill. McGhan and Dean fold these together like fine origami, often surprising us with original touches. Weekend at Bernies meets The Big Sky. These characters may be familiar archetypes, and it takes some time for us to get to know them, but they slowly reveal their individuality. Director Dean brings a smooth sweet polish to the story.

Arriving first, granddaughter Gretta (Christy Watkins) finds the table set, the Texas chews set out to enjoy, and Mee-Maw dead in bed. There's no right time to inform the arriving guests, who come with their own set of baggage and quickly relive their grudges with each other, so only brother Erik (Chip Simmons), who has arrived next, is in on the secret. Everybody's told grandma's a bit under the weather and her cold medicine has knocked her out for the present.

Gretta and hubby Van (Jeff McMorrough) are getting a divorce. Their butch daughter Mya (Olivia Swasey) writes a survivalist's blog and constantly films her hunting exploits. High-strung sister Ginny (Kara Greenberg), an obsessive compulsive, brings new boyfriend Hugo, a Canadian and former NHL star (Kevin Crouch), and son Blaze (Ian Gallagher), once-called Blake, who's totally into Goth and calls everybody a fascist. We find out he's lost because mom's remarrying and he misses his dad. Erik is the acidic scammer, the ne'er-do-well who always has a new scheme to get rich. This year's swindle is an animal translation device, so you can talk to your pets. It doesn't work, but he peddles it nonetheless, trying to coax the family into investing. He loves the old ranch, but there's no money in it for him.

Being Canadian, hockey star Hugo gets the butt of many jokes. When he says he once played in Dallas, he's told curtly, Dallas ain't Texas, and what's hockey? Blaze hates Hugo because he's stealing his mom, but he also hates everybody just because they exist as capitalist pigs. Mya overcompensates to prove her butch credentials. Into everything new-agey, Ginny brings a big bottle of Kimchi and various inedible health foods for the holiday table, pleasing no one.

There's a rampant possum who wrecks the house, three hideous creche figures carved out of tree trunks, a Johnny Manziel put-down, and admiring references to Texas A&M. When the various plots twist together, neighbor Jerry (Marion Arthur Kirby) surprises with presents from Mee-Maw. Who are you and why do you have Mee-Maw's presents, they ask this stranger. His reveal is affecting and empathetic, for Mee-Maw's gifts are the balms that heal and bring the meaning of Christmas to the entire family. A family singalong of “Silent Night,” brings the warm play to a heartfelt close.

Every world premiere should have the grace of a Ryan McGettigan design. The ranch house is beamed, with a large stone fireplace, inviting and very pleasant. Surrounding the set is a wispy vista of sky, broad and expansive, well lit by Bryon Nortin.

A Texas Carol is well-made, well-played, and well-felt. As a new addition to our holiday cheer, it is most welcomed indeed.

A Texas Carol continues through December 23 at 7:30 p.m. Wednesdays and Thursdays; 8 p.m. Fridays; 2:30 p.m. and 8 p.m. Saturdays; 2:30 p.m. Sundays at The George Theater, 5420 Westheimer. For more information, call 713-526-2721 or visit adplayers.org. $40-$75.
KEEP THE HOUSTON PRESS FREE... Since we started the Houston Press, it has been defined as the free, independent voice of Houston, and we'd like to keep it that way. With local media under siege, it's more important than ever for us to rally support behind funding our local journalism. You can help by participating in our "I Support" program, allowing us to keep offering readers access to our incisive coverage of local news, food and culture with no paywalls.
Make a one-time donation today for as little as $1.