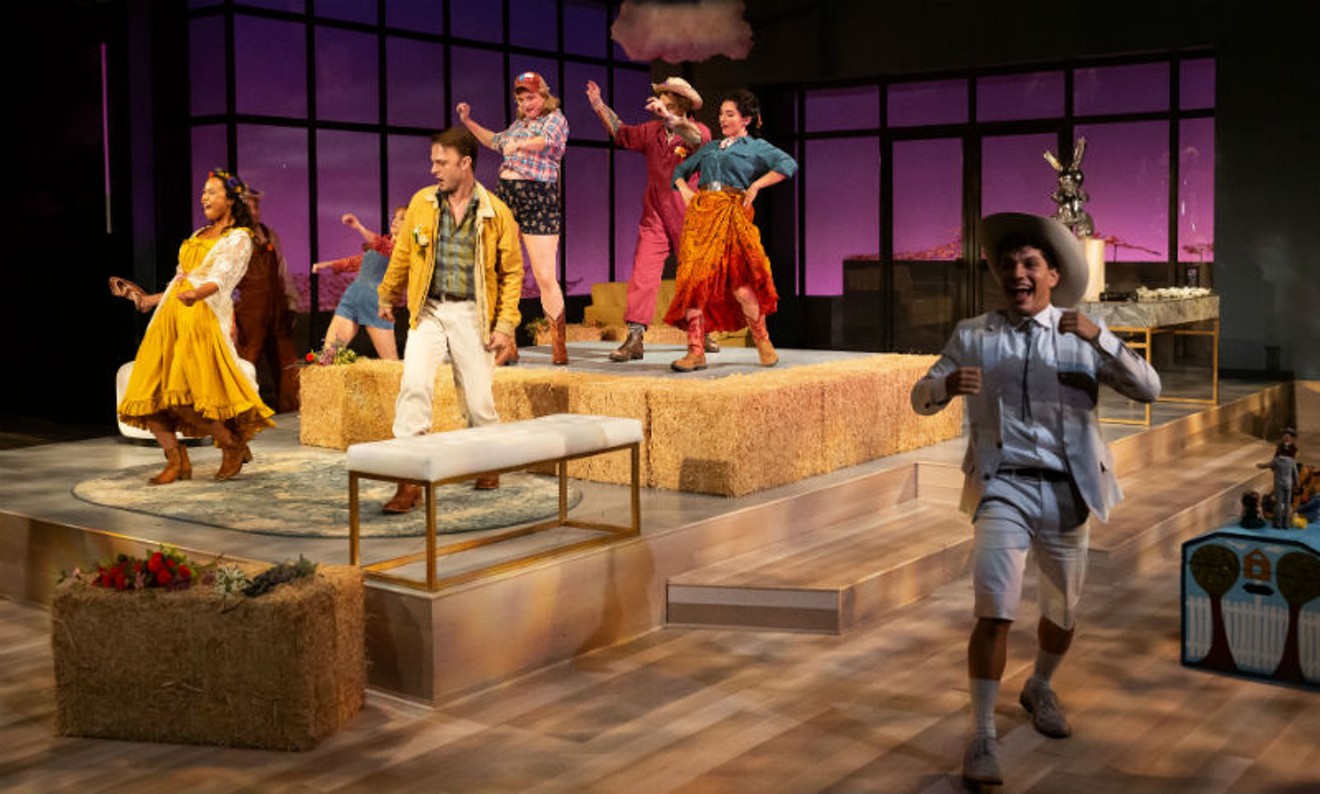 Things definitely pick up with the move to Bohemia. Photo by Lynn Lane

Alley Theatre's handsome production finally catches sunshine when it moves to the exotic land far away from dour Sicilia, where the play begins. Officially Act IV in Shakespeare's radiantly transparent yet complex fairy tale, The Winter's Tale, the Bohemia sequence is Shakespeare as jester. He tosses off action as if juggling circus balls, constantly inventing, always playing with us. Flower imagery butts against low comedy shenanigans. Love poetry to rival the Sonnets contrasts with bawdy song lyrics.

He knows just what he's doing in this story of jealousy, revenge, forgiveness, transcendence. He thrusts us into sexual drama at the beginning, then flips the entire thing over in a sensational time leap of 16 years where the action continues in this bucolic universe of sheep shearing, song and dance, and more intricate plotting. It's wondrous stage prestidigitation, and the Alley cast comes alive in it, too. In these scenes David Rainey (Shepherd), Dylan Godwin (his son, Clown), Jay Sullivan (prince in disguise Florizel), Margaret Ivey (unknowing princess Perdita), and Christopher Salazar (as thief extraordinaire Autolycus) bring on their own house lights to brighten the proceedings.

So what has happened to Acts I, II, and III? Why don't these scenes move us, resonate? They should, they're jammed packed with drama that's fierce and unsparing.

Leontes, king of Sicilia (Elijah Alexander), has hosted his boyhood friend Polixenes, King of Bohemia (Chris Hutchison), in his court for the past nine months, but “Bohemia” longs for home. Leontes prods pregnant wife Hermione (Tiffany Rachelle Stewart) to beseech him to stay a bit longer. Who can resist, replies Polixenes, and no sooner than you can whisper “Othello and Iago,” Leontes bursts into a jealous rage. “Too hot, too hot,” he cries, as Polixenes and Hermione hold hands and smile innocently at one other. She's pregnant with his child, he furiously imagines. The courtiers, especially lady-in-waiting Paulina (Elizabeth Bunch) cannot convince him of his wayward accusations. In Shakespearean swiftness, a trial is held, Hermione is condemned to prison, Leontes conspires to have his oldest friend poisoned, and then things get worse. Leontes orders their newborn baby daughter banished to die on some distant shore; their young son and heir Maxillius (Juan Sebastian Cruz) dies of a broken heart; and the queen is pronounced dead as well. Hermione's death snaps him from madness, his grief beyond repair. How can he atone? What foolishness has he done? He will mourn forever.

Though perceptively staged – using all the Alley's state-of-the-art mechanical tricks – the basic two-some of Leontes and Hermione is strangely becalmed. Their marriage barely registers, not much of a spark between them. The two leads have stage presence to spare – Alexander has commanding sturdiness, Stewart has beauty – yet neither totally convinces. Alexander has a habit of drawing out beginning syllables, elongating them. If this is his way of showing us he's thinking, it comes across as actory and unnatural. It's befuddling. When Stewart is confronted by Leontes' wild accusations, she plays it cool, using her hands as soft semaphore. You'd think she'd be a bit more annoyed, considering she's just been falsely accused of adultery. As written, her defense isn't calm. Stewart downplays, which saps her scenes. If she's not bothered, why should we be?

The Sicilia scenes are somewhat saved by the physical production itself. Scenic designer Michael Locher gives us a tony Houston penthouse right out of a very upscale HGTV episode. Wrap-around glass windows overlook skyscrapers in the background; decorative plantings on the balcony are chic and just the correct height; the furniture is minimalist and geometric; the floor is blonde wood; the art looks expensive – the Jeff Koons' steel Rabbit on a pedestal is a great comic touch, as is the Indian kachina doll in its high niche. A perfectly made bed glides up through the floor. The court of Sicilia has great taste.

When pastoral Bohemia bursts onto the scene, hay bales are carried in, the outside panorama changes into an expanse of blooming flowers, and everyone goes into Hoedown mode. We're suddenly plopped into the Dukes of Hazzard. You expect somebody to shout Yeehaw! The Rabbit stays. This change of pace plays surprisingly well. After the posh digs of Sicilia, what else could Bohemia be but barbecue and tailgate parties. Raquel Barreto's costumes use Daisy Dukes, cowboy boots, and plenty of fringe. It's very pleasant, and we want to stay. Musician Mike Whitebread stays, too. Seated on the edge of the stage, he underscores Shakespeare with twangy riffs and country/western tunes set to Shakespeare's own lyrics. It's quite a hootenanny.

Because the early scenes have been a bit of a drag, the final scene in Sicilia also falls flat. This is the famous “transformation scene,” one of Shakespeare's most imaginative, magical moments, where Paulina reveals the statue of Hermione. Everyone oohs and awes over how lifelike it is, down to its face wrinkles. Leontes begs to touch it, but Paulina warns the paint is still wet, you'll smudge her. “What fine chisel could ever yet cut breath?” he says dumbfounded. Then she intones, “Music, awake her! Strike!” Whitebread does so with a new-agey arpeggio. Slowly, Hermione comes to life. Overjoyed, Leontes embraces his long-lost wife; all is forgiven; the young lovers united, also. This is one of the purest, most transcendent moments in all theater, refulgent in repentance. Darkness has been banished, and all the love and life of Bohemia has flooded into the court of Sicilia. It should bring tears. Here, it plays like any wrap-up, nothing special. When chemistry is lacking, not even the wonders of Shakespeare can help.

There are a few directorial touches from Rob Melrose that don't land completely. One is having dead Maxillius shadow everyone, playing with his action figures which look like the characters in each scene. At the finale Melrose repeats an earlier domestic scene with Hermione and son that explains why Maxillius does this. He's been telling his mother a bedtime story. This idea works somewhat, I suppose, but it doesn't add anything to the play's troubling and complex beauties. It's a better conception than in actuality, only because the kid's such a distraction. The pickpocket scene between Autolycus and Clown, full of groin hits, doubled by Whitehead with horn bleats and cymbals, is crude and obvious, far removed from Shakespeare's naughty puns and witty repartee. It lessens the Bard.

But then there's Godwin, dressed in fright wig and battered farmer's straw hat. He's funny not doing anything. Rainey has deadpan down to a science. He says his lines as if chewing cud. He's a revelation. Salazar eats up Shakespeare's indelible Autolycus like a pile of baby back ribs. He brings this lovable rogue to full-rounded life, singing his ditties and showing off his worn wares like the incomparable snake oil salesman he is. Sullivan and Ivey are picture book lovers, swooning deeply as they romp through their love dialogue as if high. And Shawn Hamilton brings an adult gravitas to Lord Camillo, the sensible one in the room.

Not the definitive Winter's Tale, the Alley's take is mighty pretty to look at. And Bohemia is a joy. Sicilia needs work.

The Winter's Tale continues through October 13 at 7:30 p.m. Tuesdays through Thursdays and Sundays; 8 p.m. Fridays and Saturdays; and 2:30 p.m. Saturdays and Sundays at Alley Theatre, 615 Texas. For information, call 713-220-5700 or visit alleytheatre.org. $28-$77.
KEEP THE HOUSTON PRESS FREE... Since we started the Houston Press, it has been defined as the free, independent voice of Houston, and we'd like to keep it that way. With local media under siege, it's more important than ever for us to rally support behind funding our local journalism. You can help by participating in our "I Support" program, allowing us to keep offering readers access to our incisive coverage of local news, food and culture with no paywalls.
Make a one-time donation today for as little as $1.