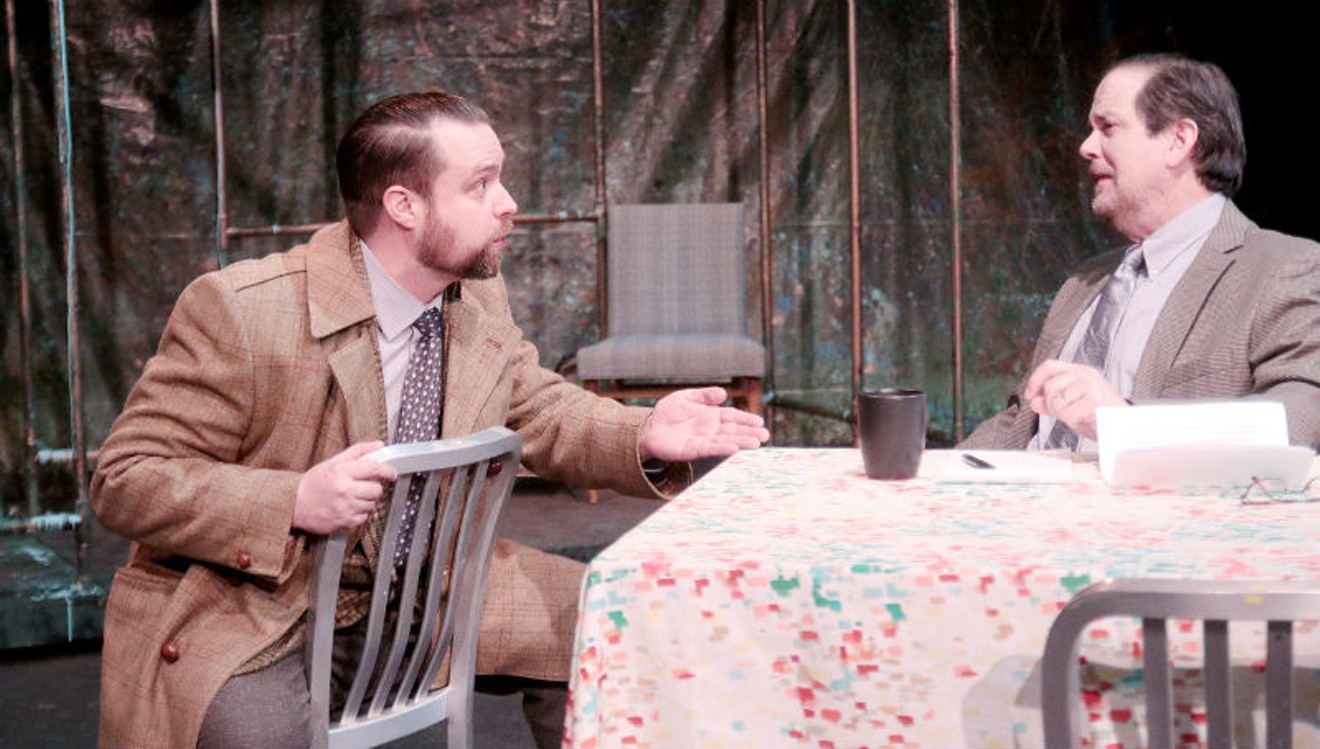 Andrew Love as Hovstad, and Thomas Prior as Dr. Stockmann Photo by Pin Lim
It's no surprise that a quill pen slashes through Classical Theatre's logo. Is there another Houston company that produces, reveres, celebrates theater's greatest writers? Shakespeare, Chekhov, Gogol, Strindberg, Aristophanes, Ibsen. There is much to be learned from these antique teachers. Our very being derives from their insights. Modern western civilization rests upon them. We see ourselves though their plays; we begin to understand the human condition through their characters. We are made compete. The world – in its ugliness and its wonder – begins to make sense.

The great grandfather of contemporary drama, Norwegian playwright Henrik Ibsen, was theater's first bad boy, its first rebel. He was always slamming doors and butting his head against propriety and smugness, political cowardice, and the middle class, which he labeled pig-headed for its inability to support the dreamer. The middle class, his audience, returned the favor and excoriated his bold works. They were shocked by the ugly mirror Ibsen brandished. When rebuffed, Ibsen just wrote another.

An Enemy of the People (1882) is Ibsen at his most bold, most direct. It's earnest and unwavering, stuffed with themes expressed in exclamation points. If his characters carried placards, they would read Idealist, Opportunist, Patsy, Hypocrite, Enabler, Liar, Betrayer. This large-type emotion, shouted at the audience through Ibsen's ripe dialogue, can still resonate – as do his prescient themes which never grow old. But this play in particular, because it's so personal, is thorny in production. There's a whiff of creaky old-school dramaturgy, a bit too much Eleonora Duse underlying everything.

It could be the translation, uncredited in the program, that doesn't smooth over Ibsen's most feverish ideas. He always says what he means, and Enemy is over-the-top in its directness and meaning. Perhaps, it's too close to us even today with its tale of greed and politics, polluted water, complicit press and moral bankruptcy. It certainly hits home. Ibsen would relish the contemporary parallels.

Respected Dr. Stockman (Thomas Prior, stalwart and upstanding) has discovered that the town's famed baths are poisoned by upstream industry. They must be shut down immediately and repaired. No one in town wants to hear this. Not the mayor, Stockman's brother (Jim Salners in blustery form), not Hovstad, the newspaper's liberal editor (Andrew Love), not assistant Billing (Greg Cote), not weaselly Aslaksen, the “moderate” Homeowners Association representative (John Dunn, is weasel personified), and, for sure, not toxic tannery owner Morten Kiil (Carl Masterson, in twinkly scene-stealing mode). On Stockman's side are his wife (Christianne Mays), somewhat fire-brand daughter Petra (Maddie Calais, in fine debut), and sea captain friend Horster (Jeff McMorough).

These last three, though, don't really have much to do, they're filler. Mrs. Stockman worries and wrings her hands while serving brandy and roast meat; Petra is mostly background as she stands with her father against the town burghers; and Horster gives aid and a chance of escape when he offers to take the disgraced and outcast family to America.

But this is Stockman's show. It's him against the world. Ibsen was always personal in his plays, showing himself, peeping through his characters, but Enemy is most personal. Stockman is Ibsen, railing against the small-minded, aghast at their corruption and sheep-like lassitude. He's loud, bold, and intransigent in his righteousness. He is right, after all. The baths are tainted and deadly. Prior strides toward us at the end, vowing not to leave, but to stand and fight for what's right. “The strong is he who most stands alone.” It's a stirring end to this “problem play.”

But there are odd choices made by director John Johnston. The music, for one. Why jazz? The smoky sax bespeaks some '50s New York City noir movie with gritty sidewalks in grainy black and white. It's just wrong and out of place. The background grid of copper water pipes is a trenchant touch, but between scenes the platforms are reconfigured – why, I have no idea – the new arrangement adds nothing but another open doorway or two. Leave the platform in place and be done with it. Securing it so it wouldn't wobble whenever someone steps on it would be time better spent.

Ibsen scared his audience. He infuriated them by his unflinching smack-down of their faults. He was the first at the barricades to do so, and at his best he penetrates and dissects with surgeon's skill. His knife is as sharp as ever. Maybe it's we who've dulled.