An Iliad Takes the Epic And Makes It Modern 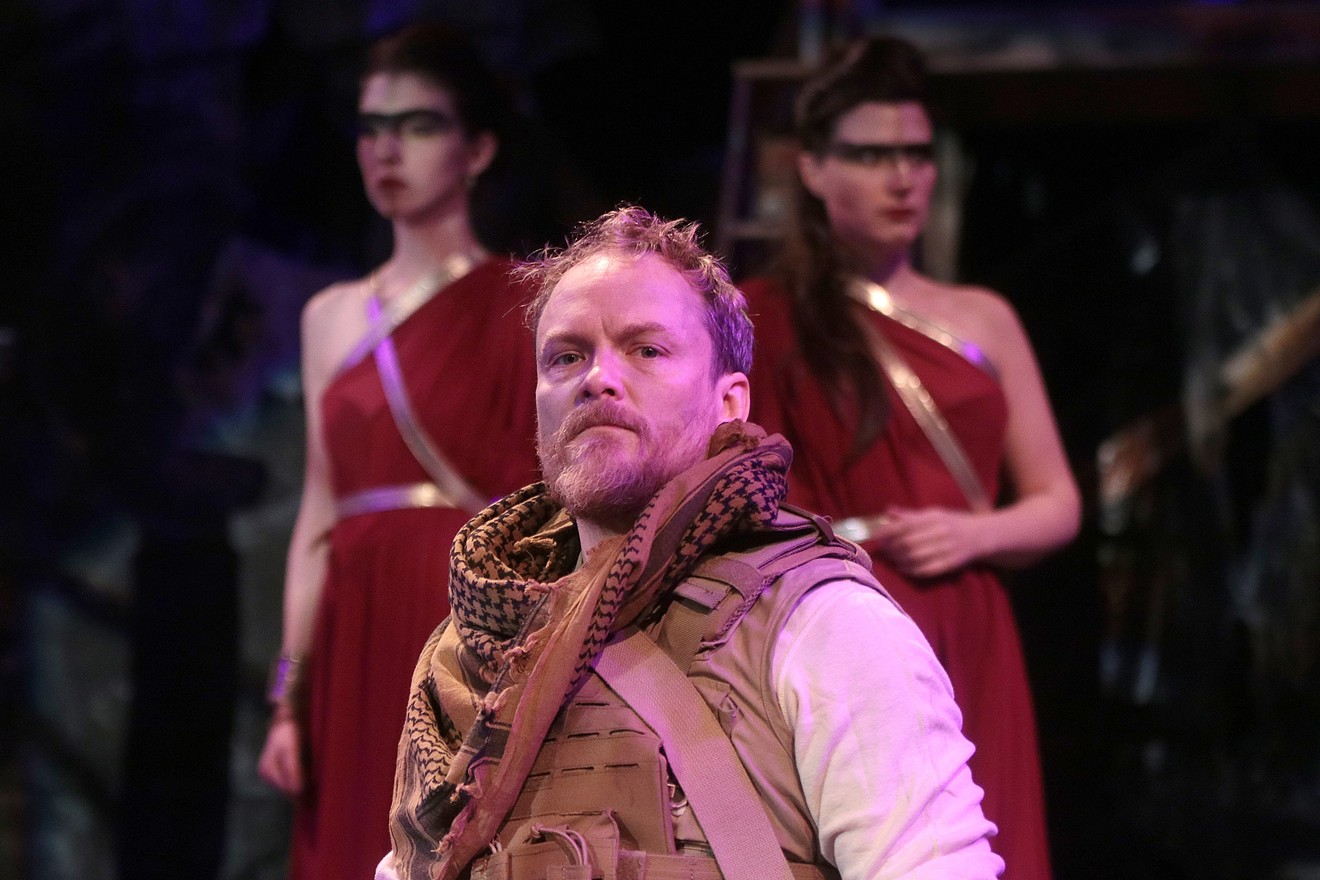 By now we’ve been so endlessly bombarded with listicles that you’d think any thematic naming off of one thing after another would barely catch our attention let alone stir any emotions. But just watch what happens when a nameless narrator, the solo actor on stage, tries to remember which tragically bloody war he’s meant to reference. Listen to the pin-drop silence of the audience as our narrator chronologically rambles through the dozens upon dozens of manmade conflicts our species has perpetrated and suffered from. From the Trojan War to the Crusades to the Great Wars all the way through to Aleppo. Sense the tearing eyes, the sad intake of breath, the heads shaking as we collectively realize all that we’ve wrought on our fellow men and women over and over and over again.

This is by no means the only powerful moment in Lisa Peterson and Denis O’Hare’s, An Iliad, a moving, modern, intense, relatable and utterly entertaining retelling of Homer's epic poem. A retelling that takes Homer’s 24 chapters on the violently chaotic 9th year of the Trojan war, condenses it down to 100 minutes, and does double duty as both narrative and cautionary tale. This is after all not Iliad, but An Iliad, and in this version, the story of war is not heralded unquestionably, rather is presented as the outgrowth of our worst natures, instinctual at times, but shameful still.

The tale and its messages are given great emotional heft here in Main Street Theatre’s presentation of Prague Shakespeare’s production of the play, co directed by Main Street Theater Artistic Director Rebecca Greene Udden and Prague Shakespeare Company Artistic Director Guy Roberts. But while the efforts behind the scene are shared, there’s no question that it’s one talent who owns the glory on the stage

In what is effectively a one man show, save for the presence of two Muses whose purpose is song and music (more on that later) Roberts, playing our anonymous narrator, burst onto the stage (set designed by Marketa Fantova and Adam Thornton with toppled columns and strewn wooden beams to appear war-torn). It doesn’t take long before he proceeds to dial things up to 11, then cleverly takes it back down to 5 then up to 11 again so many times that we feel like we too have gone through a war. If a war is watching the battle of a stupendous performance, that is.

Our engagingly affable narrator, clad in beige desert army fatigues, was there for it all, he tells us. The whole Trojan War. He knows of the rivalry and calls for revenge between the Greek Achilles and Hector of Troy. He’s witnessed the gods playing fast and loose with the humans for their own amusement. He’s been there when lives have been lost and hearts broken. He’s seen what rage can do to a person. He wants to make us see.

Alternating between playing himself as narrator and the numerous characters that make up the story, Roberts expertly guides us through the complex narrative as though he were catching us up on a nighttime soap opera. No need for familiarity with the classic story here, Peterson and O’Hare cleverly spoon feed it to us in a distinctly palatable manner. Yes there is some classic text spoken (Robert Fagles' 1990 peppy verse translation of The Iliad makes up a part of the dialogue), but most of the play utilizes modern language and manner of speaking. Not to mention metaphors that bring the emotions of the story in line with our everyday experiences.

When attempting to convey just how many ships the Greeks had out in the Trojan harbour, our narrator speaks not of the ancient towns they came from but instead likens it to having “all the kids from Ohio..Texas…New York…..Miami” on warships headed your way. Wanna know what the urge to kill was like for those soldiers? Roberts gives us a whole road rage scenario to make us understand. Why stick around for a 10 year war that’s going nowhere? Think about your stubborn resolve to purchase after standing in line at a grocery checkout for half an hour. And just how important a warrior was Achilles? Well, he was like JJ Watt, of course.

Far from feeling feigned or simplistic, the show’s usage of modern parlance and even contemporary humor, so effortlessly woven by Roberts, adds a welcome accessibility to the story that puts us at ease. And it’s just when we’re this comfortable, that the punches to the gut come.

The list of wars was surely one of those blows. But there’s also a horrific retelling of a battle scene so intensely performed we feel as wounded as the dying men on the field. A scene of revenge torture relayed leaves us sickened. A widow and father’s grief pangs our heart. And as before, when the heightening becomes too much, Roberts cools things off in a ‘well, what can you do’ manner that we know may sound casual but isn’t. It’s like the softer notes after the crescendo – they may have a light touch, but it doesn’t erase what’s come before.

Which brings us to the original music and song in the show. The one weak spot in the production. It’s not that composer Patrick Neil’s emotive, at time atonal notes didn’t highlight the action on stage, it did, in both the recorded portions and the live violin playing by Fanette Ronjat as one of the show’s Muses. And the sung passage of Ancient Greek by the other Muse, Jessica Boone was delivered with an angelic voice to equal effect. However, the pair’s placement on wooden scaffolding atop the set meant that every time they piped up, our attention went to them and away from Roberts and his fast paced narrative.

More questionable was the direction of Boone, who was asked to stand up and step forward each time she sang or more puzzlingly simply waved her hands about or mimicked Roberts’ gestures on stage. Again, attention was drawn away from the story, making it too easy to lose what was going on in the narrative at the time. Additionally, what was up with the Muses’ costuming? The burgundy flowing dresses with gold piping worked just fine, but why the Daryl Hannah Blade Runner black eye-band make up? Again it distracted, and given what Roberts was accomplishing on stage, that was a shame.

The good news is that not even the problems in this production lessen its overall impact. Yes it’s an entertaining condensed depiction of one of the oldest works of Western literature. One that will have any English Major wondering why they couldn’t have seen this show ahead of their midterm Homer exam. But An Iliad is far more than that. Rage and violence leads to tragedy we are told. Tragedy that could have been avoided. War that took far more that it gained for any one side. Mistakes we are still making to this day.

Homer’s poem continues to be our reality, the play tells us. The hope is that one day we’ll get to retell the story in a different light.